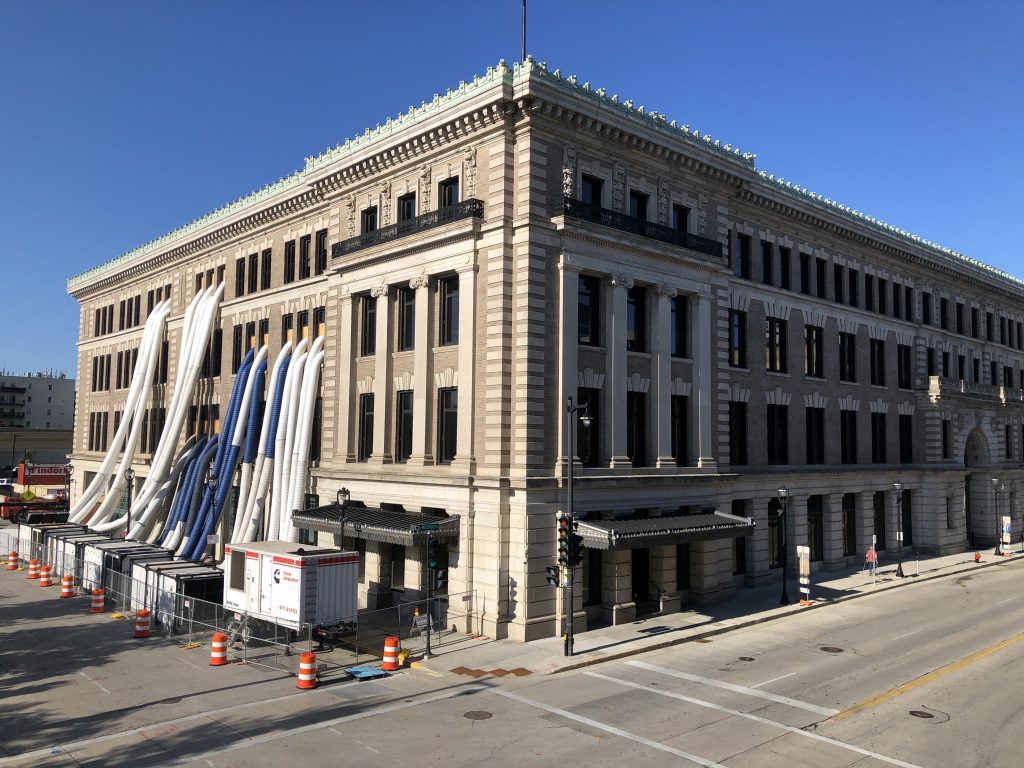 The Public Service Building in August 2020. Photo by Jeramey Jannene.

Most downtown workers will never know that the system they rely on to heat their workplace flooded in 2020. But they will pay for at least some of the over $60 million in damage.

On May 18, the We Energies steam tunnel system, which delivers steam heat from the Valley Power Plant to a number of downtown buildings, flooded following a significant rainstorm.

Millions of gallons of water poured into the tunnel system. The surge overwhelmed pumps, cut off steam access to half of the system’s 400 customers and damaged buildings. By chance, the building that suffered the most damage was We Energies’ own headquarters, the Public Service Building at 231 W. Michigan St.

The steam heat, which runs through pipes at temperatures of up to 400 degrees in the larger tunnel system, quickly caused the water to boil. The company reports an access shaft at N. 2nd St. and W. Clybourn St. was shooting boiling water up to 35 feet in the air during the flood. The utility rushed to bring in extra pumps, having already deployed a number in anticipation of the storm surge.

A number of Westown buildings were deluged with water during the storm, either from the tunnel system or other sources, including the Riverside Theater in the Empire Building, the 310W office building and the Bradley Symphony Center.

The utility cut off access to the system where possible, a decision that suspended service to East Town and part of Westown.

In June, We Energies estimated the damage to its headquarters at $10 million. As of 2021, that’s grown to $60 million according to a report from Rich Kirchen. The company hopes to recover most of the cost via an insurance claim. But costs it cannot recover would be passed onto ratepayers.

“The exact cause is still under investigation, but we believe that the heavily-flooded portion of the underground steam system near 2nd and Clybourn caused a steam release into our headquarters,” said We Energies system manager Ted Sniegowski to members of the Common Council’s Public Works Committee on June 3rd. “The steam damaged parts of the building, including computers and other electronic equipment, carpeting, cubicle partitions, and furniture that became wet. Ceiling tiles, wallpaper and light fixtures also sustained damage.”

The four-story building spent much of 2020 with what looked like tentacles coming out of its windows, part of an effort to dry and clean the severely damaged property. The steam damaged not only the basement, but the upper floors and ruined most of the mechanical and electrical systems in the building.

The Public Service Building isn’t a generic office building. It’s a Beaux-Arts-style edifice that fills an entire city block. It was built as a downtown passenger terminal for the regional interurban system developed by a We Energies predecessor – The Milwaukee Electric Railway and Light Company. Completed in 1905 following the designs of architect Herman Esser, the trains pulled into the first floor of the building and passengers were greeted by an ornate lobby. The trains are long gone, but the marble-clad lobby and a second-floor ballroom remain. When not dealing with a flood or pandemic, hundreds of workers fill the upper floors.

As a result of the pandemic, most employees of We Energies and parent WEC Energy Group that could work remotely were already doing so when the incident occurred.

Sniegowski said the water in the tunnel system came from multiple sources and contained both sanitary and sewer water. “We have not seen anything like this before,” he told the committee. Water in the tunnels caused the electric sump pumps to fail because of a series of events triggered by the high temperature of the water. Electrical conduit was ripped from the wall in certain locations. He described what happened as a “tidal wave” that broke into the tunnel system.

Customers, primarily office buildings and downtown apartments, use the system to heat their buildings as well as to create hot water and other practical uses (at least one downtown athletic club used it to heat a sauna until recently). Steam runs through the walkable tunnels in high-pressured pipes. The steam originally came from waste heat from the coal-powered Valley Power Plant, but the plant was converted to burning natural gas in 2015. 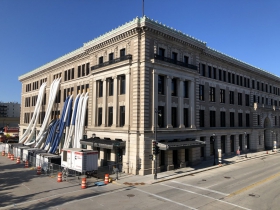 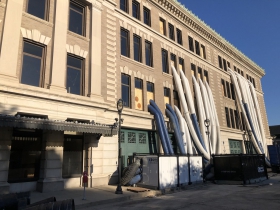 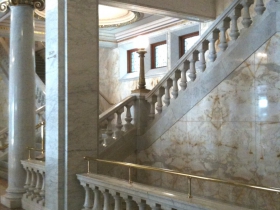 Chicago-based packaged food company Conagra Brands is closing its Milwaukee plant, 7620 N. 81st St., and laying off all 190 employees. The move will be completed by April 2nd to a notice filed with the state.

The company acquired the 54,733-square-foot facility in 2018 as part of the purchase of the Sandwich Bros. of Wisconsin product line from Kangaroo Brands. It had previously acquired the Kangaroo trademark and pita chip division in 2012, including the factory at 8222 N. Granville Woods Rd. That plant was sold to Treehouse Private Brands as part of a larger $2.7 billion deal in 2016.

A third-party logistics technology and service provider will move from Cudahy to Bay View as part of an expansion plan and talent attraction strategy. Ascent Global Logistics is leasing 16,800 square feet of space in the Louis Allis Company complex at 427 E. Stewart St. It will initially move 95 employees into the space, with hopes to add up to 30 more according to a report from Alex Zank.

“We are a talent-focused organization, so it is imperative that everything we do be built to attract the best team members,” the company told Zank. “Downtown Milwaukee is easily accessible (from Bay View). Our team can ride bikes to work, and we even installed a locker room with showers to make this type of commuting easy.”

The large complex, with over 470,000 square feet of space, runs from S. Allis St. to S. Aldrich St. on the north side of E. Bay St. In recent years it has generated increased interest, including landing Enlightened Brewing Company as a tenant. It was originally built for the Louis Allis electric motor company. Ascent would occupy a portion of the three-story building at the southeast corner of S. Allis St. and E. Stewart St.

The Doral Company is the anchor tenant in the complex, with Industrial Group Inc. owning the property. Both entities are owned by the Doro family.

Ascent, according to its website, has more than 20 locations and 900 employees.

La Causa also operates an early education and care center (809 W. Greenfield Ave.), a crisis nurse and respite center (522 W. Walker St.) and provides social service programs for adults and children (based out of a facility in Glendale).

It will be late 2025 at the earliest when a new home for the Milwaukee Public Museum and Betty Brinn Children’s Museum opens, but the public museum announced a major milestone in the project’s development this week.

MPM, announced a team of three architecture firms to design both the structure and interior spaces. It also announced a contracting team to build it. The natural history museum will own the building and lease space to the children’s museum.

Milwaukee-based Kahler Slater will partner with New York City-based Ennead Architects. The Milwaukee firm has had a role in many area cultural projects, most recently leading the design of the Bradley Symphony Center. The New York City firm brings a specialty in museums as well as experience designing embassies, performing arts centers and large education buildings.

The Milwaukee Fire Department Administration Building, an unassuming three-story building at 711 W. Wells St., will soon be named after its designer, Alonzo Robinson. The change will honor the first Black architect practicing in Milwaukee and Wisconsin.

The Common Council is advancing a proposal, led by council president Cavalier Johnson, to assign the name “Alonzo Robinson Milwaukee Fire Department Administration Building” to the structure, completed in 1961. The Public Works Committee unanimously endorsed the change on Wednesday. The third level is used for MFD administration with an active fire station on the first two levels.

A native of North Carolina, Robinson grew up in Delaware, served in World War II and graduated with a degree in architecture from Howard University. He moved to Milwaukee in the early 1950s and got a job with the City of Milwaukee. Later he became a partner in Waukesha-based DeQuardo, Robinson and Crouch and ultimately worked as an architect for Milwaukee County from 1975 to 1998. He received his architecture license in 1956 and founded Alonzo Robinson Architect & Sons in 1972. Robinson passed away in 2000 at the age of 77 as a result of complications from cancer and a stroke,

A parking lot on the southeast corner of the former Milwaukee Journal Sentinel complex would become a Tempo by Hilton hotel under a plan from HKS Holdings.

“This flag is probably the strongest and most unique in the Marriott line,” said Mark Wimmer, president of Wimmer Communities. The company would develop and operate the hotel. It presented the plans to the Historic Third Ward Architectural Review Board on Wednesday afternoon.

Former Gimbels Will Be “Thrive On King”

The former Schuster’s and Gimbels department store at 2153 N. Martin Luther King Jr. Dr. has a new name, again. Actual construction is still expected to begin in the coming weeks.

“The heart of this project is really about community,” said the Greater Milwaukee Foundation‘s COO and CFO Kenneth Robertson. He announced the formation of a community advisory council made up of residents of the adjacent Harambee, Halyard Park and Brewers Hill neighborhoods.

Serb Hall Is For Sale

You can buy a piece of history on Milwaukee’s South Side. But that also means it could soon be last call for one of Milwaukee’s popular fish fry offerings and event venues.

American Serb Hall, the event venue at 5101 W. Oklahoma Ave., is being listed for sale by its owner, St. Sava Serbian Orthodox Cathedral. The congregation retained Founders 3 as its listing agent.

“Our Saint Sava congregation recognizes that the business realities of today and in the foreseeable future present an unfavorable financial path going forward,” said the church in a statement. “However, because of the prominent and desirable location of the property, we’re confident that there will be positive alternative use options that will better serve the church and local community.”

Central Standard Craft Distillery is moving forward on a proposed downtown tasting room. Although calling it simply a tasting room undersells the scale of what the seven-year-old distillery is planning.

An affiliate of the craft distillery, led by Evan Hughes and Pat McQuillan, purchased the long-vacant, three-story building at 320 E. Clybourn St. for $930,000 last week from long-time owner Lorette Russenberger.

The news comes just a little over a year after the deal was first announced. At the time, Hughes and McQuillan thought they would close on the purchase in February 2020 and set out on an ambitious plan to open in time for the July 2020 Democratic National Convention. “If it works out great, we would love to. If we miss it, unfortunately, we miss it,” said Hughes at the time.