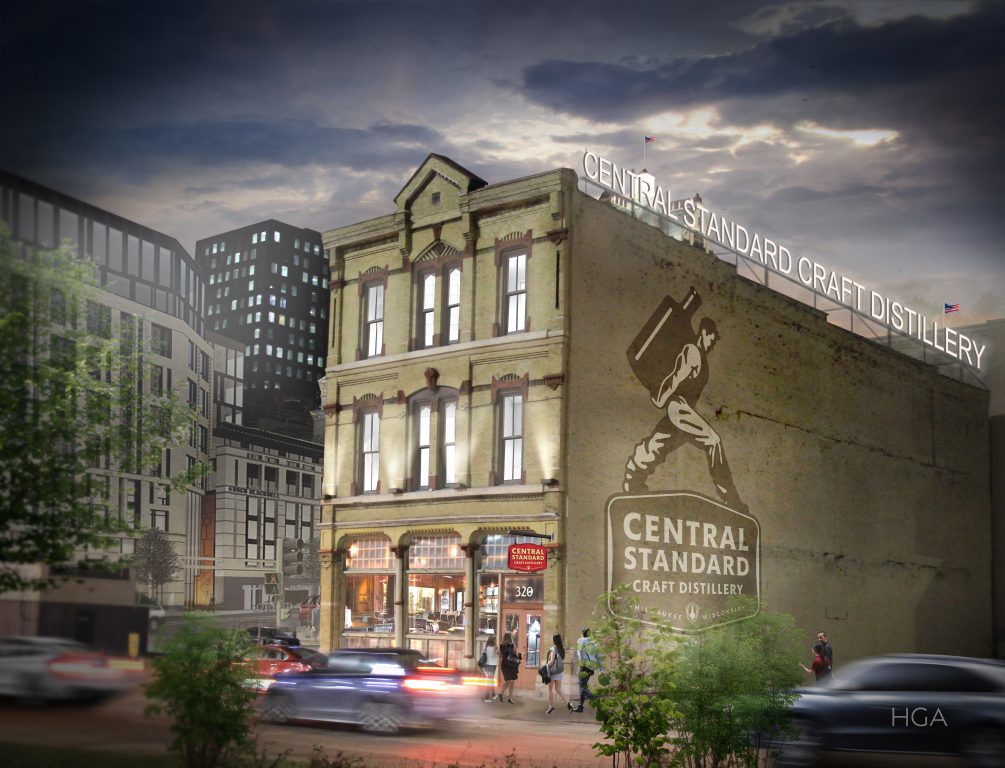 Central Standard Craft Distillery is moving forward on a proposed downtown tasting room. Although calling it simply a tasting room undersells the scale of what the seven-year-old distillery is planning.

An affiliate of the craft distillery, led by Evan Hughes and Pat McQuillan, purchased the long-vacant, three-story building at 320 E. Clybourn St. for $930,000 last week from long-time owner Lorette Russenberger.

The news comes just a little over a year after the deal was first announced. At the time, Hughes and McQuillan thought they would close on the purchase in February 2020 and set out on an ambitious plan to open in time for the July 2020 Democratic National Convention. “If it works out great, we would love to. If we miss it, unfortunately, we miss it,” said Hughes at the time.

But as it turned out, almost everyone, including Joe Biden, missed the Milwaukee DNC due to the COVID-19 pandemic. But the project is still moving forward.

Over the past year, the partners applied for a series of permits to advance the redevelopment. The applications indicate the distillery is working with architecture firm HGA on a $500,000 overhaul.

The 11,730-square-foot building would effectively replace the company’s first facility, a 1,600-square-foot tasting room in Walker’s Point at 613 S. 2nd St. That bar closed in early 2020 as part of the building’s redevelopment into a new bouldering gym for Adventure Rock.

Central Standard maintains its production distillery at 2330 W. Clybourn St. It opened that facility in 2017.

Hughes didn’t respond to a request for comment by the time of publication, but the permit applications indicate the distillery is pursuing a plan to add a rooftop deck with an 80-person capacity and two floors of dining and drinking space. The building’s third floor would be left as a white box space for a future tenant, while the basement would contain a commercial kitchen.

A 100-gallon still would provide on-site research and development capabilities.

An elevator would be extended to the rooftop, ending one of the quirks of the 147-year-old building – a hydraulic lift. The freight elevator in the building is powered by water, one of only a handful in the area to do so. A large cylinder fills and empties in the basement propelling the carriage up and down.

The building was designed and owned by architect Edward Townsend Mix, which explains the unusual design choice of carving the architect’s name into the cornice.

Originally built in 1874 as a headquarters and store for the Wisconsin Leather Company, one of the largest such companies in the country at the time, the building at 320 E. Clybourn St. (then 114-116 Huron St.) wasn’t home to a leather company for long. A historic designation report says the then-struggling company relocated by 1887 and was acquired by a competitor in 1889.

Alcohol or its ingredients are likely already infused in the building’s Cream City bricks. The Charles L. Kiewert Company, a hops and brewery supply firm, was located in the building starting in 1892.

Most recently it’s been home to the exotic art and furniture store From Afar. Before that it was home to retail store White Thunder Wolf.

The property is assessed for $689,900, down exactly $200 from the year prior. Until last week, Russenberger had owned the property since 1999. She acquired it from Robert E. John of Renaissance Books. Permits indicate a substantial repair and rehabilitation of the structure was undertaken in 1999 and 2000.

The activity in the area, including being a block from the Historic Third Ward and two blocks from E. Wisconsin Ave., was a big part of the draw for the distillery. McQuillan and Hughes also said the building itself, including the high ceilings, large windows and exposed brick, was a draw.

An elevated freeway, Interstate 794, passes the building across the street affording a great advertising opportunity should the company install a large outdoor sign as a conceptual rendering suggests it might. But what about painting the name on the side of the building? “We’re going to do something cooler than that,” said Hughes.

The Hop, with tracks split between north-bound and south-bound, runs on both sides of the property.

The building has been listed on the National Register of Historic Places since 2005, but is locally designated.

For more on the building’s history, see a 2020 “What’s It Worth?” column by my colleague Michael Horne. 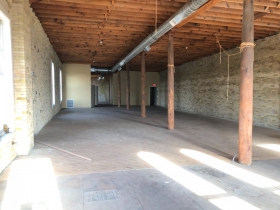 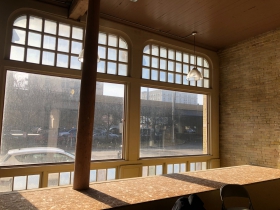 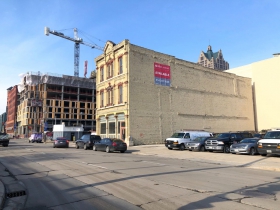 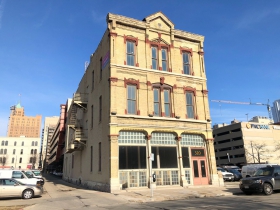 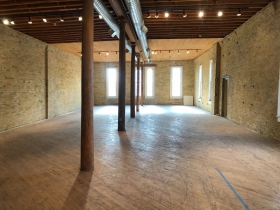 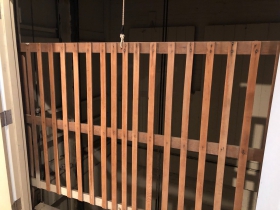