In speech, Biden is optimistic about addressing racism, police reform.

By Madeline Fox and Laurel White, Wisconsin Public Radio - Sep 3rd, 2020 07:43 pm
Get a daily rundown of the top stories on Urban Milwaukee

Joe Biden urged optimism and unity in the wake of violence and political discord during a visit to Kenosha on Thursday.

The visit was the former vice president’s first appearance in Wisconsin during this presidential campaign cycle and the first time a Democratic nominee for president has been in Wisconsin since 2012.

Biden began his trip by meeting the family of Jacob Blake, the Black man whose shooting by a Kenosha police officer last month sparked days of protests and violence in the city. Biden was joined by his wife, Jill, for the meeting, which lasted for about an hour, according to a pool report. Biden said he also spent about 15 minutes on the phone with Jacob Blake, who is still in the hospital.

Afterward, Biden hosted a community meeting where he listened to several short speeches from Kenosha residents at Grace Lutheran Church. A firefighter, a business owner, and a Black Lives Matter community activist were among those who spoke. 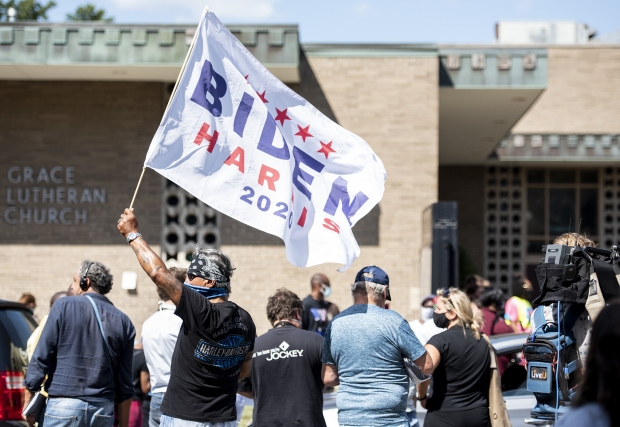 A man holds a Biden flag outside of a church where Democratic candidate Joe Biden was speaking Thursday, Sept. 3, 2020, in Kenosha. Angela Major/WPR

Following their remarks, Biden gave a short speech urging optimism and unity in the wake of recent violence and political discord.

“I honest to God believe we have an enormous opportunity, now that the screen, the curtain, has been pulled back on just what’s going on in the country, to do a lot of really positive things,” he said.

Biden spoke about addressing racial inequality in Kenosha and across the country by raising the minimum wage to $15 an hour, putting some offenders in rehabilitation programs instead of jail, and investing in affordable housing programs. He also talked about his support for health insurance coverage for mental health care and expanded government support for early childhood education programs.

“There’s so much we can do,” he said, arguing those programs could be paid for by raising taxes on the wealthiest Americans. “It’s not that we can’t do this — we haven’t been willing to do this. I think the public is ready.”

He argued it’s possible to find consensus on criminal justice reform and said he believes “a significant portion of the police are decent people.”

He pledged to create a White House commission on policing, if he is elected. The said the commission would include representatives from police organizations and the Black and Latino communities. 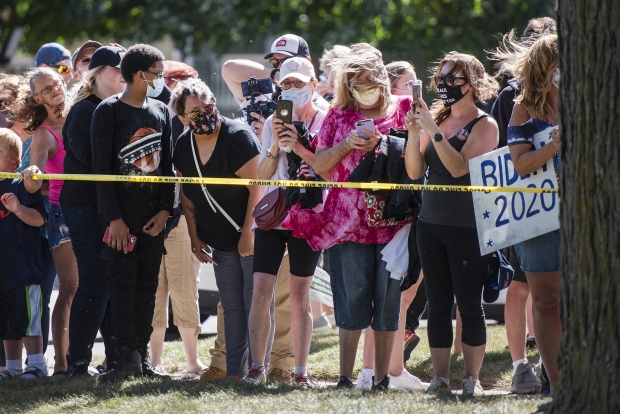 A crowd gathers to try to catch a glimpse of Democratic candidate Joe Biden’s motorcade as he leaves Thursday, Sept. 3, 2020, in Kenosha. Angela Major/WPR

“Protesting is protesting, but none of it justifies looting, burning or anything else,” he said. “It cannot be tolerated, across the board.”

During his speech, Biden frequently criticized how President Donald Trump has talked about unrest in Kenosha and other communities that have seen violent and destructive protests, saying the president’s remarks have spurred more conflict.

“The words of a president matter — whether they’re good, bad or indifferent, they matter,” Biden said. “Hate only hides. And when someone in authority breathes oxygen under that rock, it legitimizes those folks that come on out, come out from under the rocks.”

During the president’s visit, which included a tour of damaged property and a roundtable event, Trump praised law enforcement and repeated campaign rhetoric about what he describes as radical, left-wing violence in cities across the country. He condemned conversations about systemic racism in the U.S. as “destructive.”

Both Biden’s and the president’s campaigns released ads focused on unrest in Kenosha on Wednesday. Biden’s ad accuses Trump of fanning the flames of unrest, while Trump’s accuses Biden of having a “weak” response to violent and destructive protests.

Biden’s visit came just days after Democratic Gov. Tony Evers sent a letter to Trump asking him to stay away from Kenosha to give the city a chance to heal. Evers did not send a similar letter to Biden.

Speaking to reporters during a Wisconsin Department of Health Services COVID-19 briefing Thursday, the governor said Biden had already made plans to visit Wisconsin by the time Evers found out about it. But Evers said he told Biden he would prefer if he also stayed away from Kenosha.

“The bottom line is this. Both candidates knew my position,” Evers said. “Both candidates, because they’re just like any other human being in the country, are allowed to make their own decisions. And both did that.”

Asked whether it was hypocritical to send a letter to Trump and not to Biden, Evers said it was not.

“They both knew what my position was,” Evers said. “That is not hypocrisy. I was consistent with both of them. One of them was through a letter because I knew about it ahead of time. And the other was verbal.”

“When all the cameras go away, we can’t stand my nephew back up,” Blake said. “But we can make a difference while we have this platform right now for all the little Jacobs worldwide.”

Jacob Blake’s uncle Justin Blake addresses the crowd outside of the church where Biden is visiting in #Kenosha. pic.twitter.com/RjMtIVW5BR

Donna Dioszegi, who held a sign that said “Biden = Truth, Trump = Lies,” said she came to the event to “support the Black lives that live here.” She said she didn’t want the recent events in Kenosha to be “exploited for campaigning reasons,” but said she supports campaign stops in the city if it “shines a spotlight on this terrible situation that’s been going on for so long.”

“Something needs to be done,” Dioszegi said.

Geri Dougherty, who identified herself as a Trump supporter, said she came out to see what Biden’s message would be.

“I’m open to what might be said,” Dougherty said. “I don’t like what happened here in Kenosha. There’s no reason for this, it’s a travesty. They’re not protesters as far as I’m concerned, they’re terrorists.”

Republicans have been sharply critical of Biden’s lack of in-person appearances in Wisconsin so far this campaign season, arguing he has forsaken what is considered to be a key swing state in the presidential election.

Speaking on a call with reporters ahead of Biden’s visit, former Gov. Scott Walker argued the campaign stop is coming too late.

“It’s amazing that after almost two years of being away from Wisconsin, it took these kind of riots to get Joe Biden to show up,” Walker said.

Andrew Hitt, chair of the Republican Party of Wisconsin, criticized Biden for not personally appearing in Wisconsin two weeks ago for Democratic National Convention. The convention was initially scheduled to take place in Milwaukee, before it moved mostly online in response to the COVID-19 pandemic.

“Joe Biden didn’t care about Wisconsin (two weeks ago). If he did, he would have made his case to the voters during the Milwaukee convention — he would have come to Wisconsin,” Hitt said.