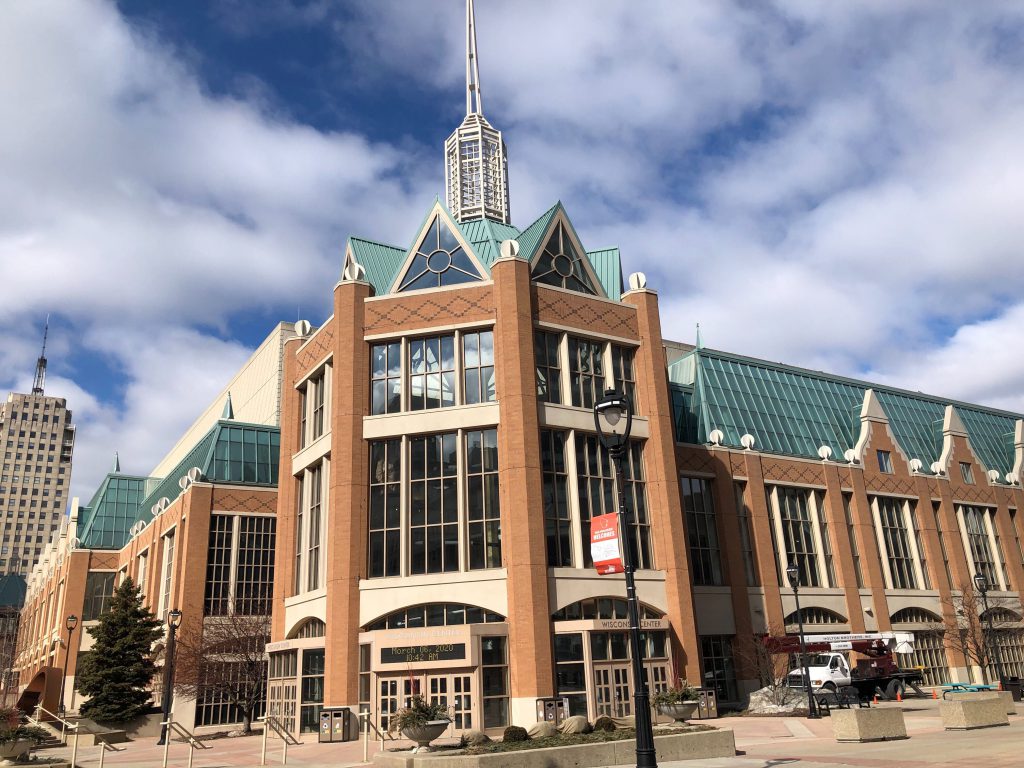 The Wisconsin Center in March 2020. Photo by Jeramey Jannene.

Democratic Presidential candidate Joe Biden won’t travel to Milwaukee to speak at the Democratic National Convention, but some Wisconsin politicians will still speak from the stage.

The Wisconsin Center will also be home to a video control room that will control hundreds of video feeds from across the country.

A host of Wisconsin politicians will speak as well, and all are expected to deliver their speeches from the convention center. The list includes Congresswoman Gwen Moore on Monday, Mayor Tom Barrett and Lieutenant Governor Mandela Barnes on Tuesday, Governor Tony Evers on Wednesday and Senator Tammy Baldwin on Thursday. Party Secretary Jason Rae, a Glendale resident, will direct the roll call vote on Tuesday with Barnes submitting Wisconsin’s votes.

Luz Chaparro Hernandez, a Milwaukee Public Schools teacher, and Julie Buckholt, a retired MPS teacher, will both speak during the convention. Buckholt will touch on healthcare and how she has benefitted from the protections in the Affordable Care Act for a chronic health condition. Chaparro Hernandez, who teaches a bilingual elementary school program, will speak on her experiences as a mother and educator during the pandemic.

And while over 5,000 voting delegates won’t visit Milwaukee, they’ll still get sent a credential as though they had attended. Milwaukee artist Mauricio Ramirez designed the Milwaukee Art Museum-inspired piece.

“Whenever I create a piece that represents Milwaukee, I want to make sure it includes our landmarks, architecture and culture, and the Milwaukee Art Museum was one of those places that really represents all of these features of our city,” said Ramirez in a statement. “It’s a great feeling to put our best foot forward as a city through this art, and to know that delegates participating across the country will receive something that shows the soul of Milwaukee.” The extent to which Ramirez’ many murals, and the rest of the city, will be visible during televised coverage of the convention remains to be seen.

The convention runs from August 17th through the 20th with televised programming from 8:00 p.m. to 10:00 p.m. each night. A full schedule is available on the DNC website.

The convention, once expected to bring over 50,000 guests and $200 million in spending to the Milwaukee area, had already been scaled back and delayed, but last week the Democratic National Convention Committee converted the event to an effectively virtual gathering.

Protest groups still plan to assemble in Milwaukee, but the scale and number of those protests remain unclear. Barrett told the media last week that the city had received no more than five protest parade permit requests, but acknowledged many protests could occur without a permit.