The former Grand Avenue looks more like the entertainment hub it once was. 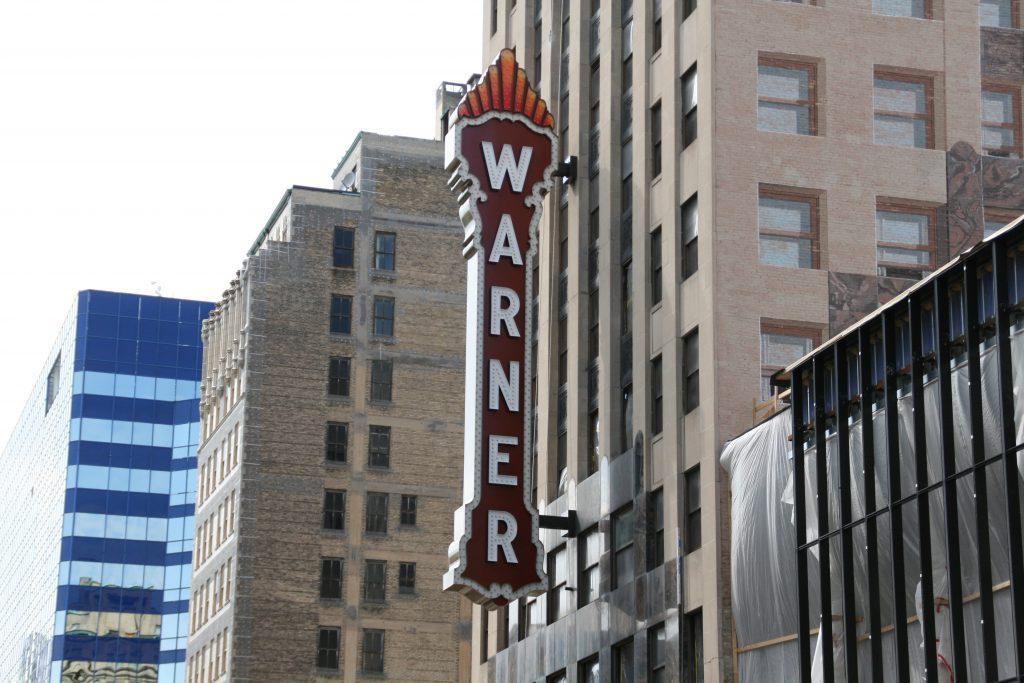 The new “Warner” sign on the Bradley Symphony Center. Photo by Jeramey Jannene.

The long-vacant facility, being redeveloped into a music hall for the Milwaukee Symphony Orchestra, will be known as the Bradley Symphony Center in honor of the Uihlein family and the late Peg Bradley.

But the sign doesn’t display the Bradley name. Instead, it’s a modern-clone of the historic sign that hung from the building when it was constructed in 1930. Similar to moving a 625-ton wall 35-feet in one piece instead of disassembling and reassembling it, the sign’s design is intended to comply with National Park Service standards to access up to $19 million in historic preservation tax credits. A horizontal marquee underneath the vertical sign will also mimic one that came before it.

The installation drew a small crowd to Wisconsin Avenue this weekend, including symphony president Mark Niehaus who took in the proceedings from a lawn chair. But unlike when the wall was moved, the star of the day wasn’t a pallet-load of Dove soap. Instead the crew from Poblocki worked methodically and was done by lunchtime.

Unfortunately, the rest won’t be completed that quickly. Work continues on interior restoration and reconfiguration as well as building a glassy, two-story addition.

The theater is one of four downtown to get a new sign in recent years, with the Pabst, Riverside and Turner Hall buildings also receiving new historically-inspired signs.

You can now look down the former Grand Avenue and see the Warner and Riverside signs. Hopefully it won’t be long until they’re lit up again. The $89 million symphony center was, pre-pandemic, scheduled to open in September.

For more on the project, see our coverage from February. 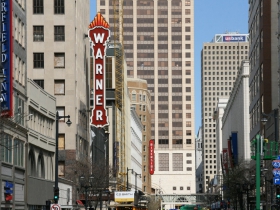 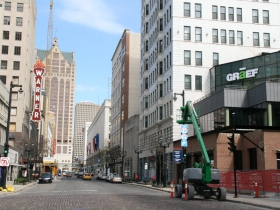 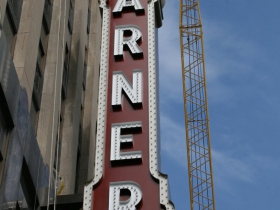 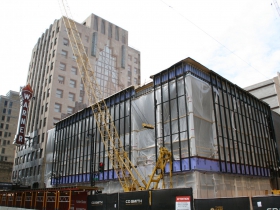 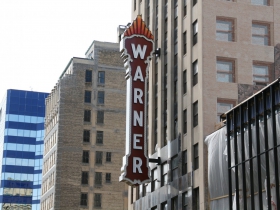 A second fight over a northwest side Comfort Suites hotel’s now-prohibited policy of denying rooms to Milwaukee residents and other guests that live near the hotel went largely unnoticed as the public and media, this reporter included, shifted to covering COVID-19 in mid-March. But the Common Council’s Zoning, Neighborhoods & Development Committee attempted to send a message on March 17th when they again moved to deny a request for a new sign.

It previously rejected the sign request in December when Alderwoman Chantia Lewis revealed that the hotel had blocked her family from staying there and had a policy of denying guests from within 30 miles. Alderman Russell W. Stamper, II referred to the policy as racist. The Common Council banned lodging discrimination service based on residence in February.

With a new policy in place, attorney Joshua Gimbel appeared before the committee to secure approval for the new sign. “Isn’t this the organization with racist policies?” asked Stamper. Gimbel said the policy was immediately changed with new ordinance. “I don’t think there is a basis under this particular ordnance to deny this particular thing,” said the attorney.

“I don’t like the design of the sign, it’s not appropriate for the location, therefore I will be a no vote,” said Ald. Robert Bauman. The committee voted 0-4-1 to reject the sign, with chair Khalif Rainey abstaining.

But when the file reached the full Common Council on March 24th, the body passed the measure unanimously as part of a broader vote on the entire package of files from the committee. Stamper was the lone member to object to its passage, but he didn’t find support from at least two peers to force a stand-alone vote. The ownership group for the hotel, referred to as “the Patels,” has never appeared before the council. Registered in Illinois, state records list the company’s registered agent as Anup Patel.

Read the full article and see the photos

A proposed sushi-hibachi restaurant for downtown Milwaukee looks to be moving forward.

Chen is proposing to open Ninja MKE in the building, his third sushi and hibachi combination restaurant. He also owns and operates Ninja Japanese Steakhouse in West Bend and Ninja Hibachi Sushi Steakhouse in Menomonee Falls.

The first floor of the Milwaukee building would contain a sushi bar, bar and kitchen. The second floor would contain hibachi tables where chefs prepare and cook Japanese food in the presence of customers.

Chen secured city approval for a liquor license and food dealer permit for the proposed Milwaukee location in February. His attorney, Vincent Bobot, said Chen would be investing $1.4 million in the restaurant.

While the travel industry has been effectively shut down by the COVID-19 pandemic, one Milwaukee-based lodging company is planning how to grow.

Frontdesk, which offers short-term rentals in 28 different cities, has raised an additional $3 million in debt and equity. Founded in Milwaukee in 2017 by Kyle Weatherly and Jesse DePinto, the company offers fully furnished apartments for lease through its own website and others such as Airbnb. It has over 500 units and has completed over 60,000 stays to date.

The latest funding completes a $6.8 million Series A funding round for the start-up. The company has the backing of venture capital firms as well as investors like Milwaukee Bucks owner Marc Lasry and Bill La Macchia, head of Milwaukee travel firm La Macchia Enterprises (The Mark Travel Corporation).

“Before the coronavirus crisis, we always felt that we had the most supportive investors imaginable,” said Weatherly, the firm’s CEO. “Now we are absolutely certain of it. Not only did they make good on their initial commitment, but they increased it by almost $3 million. This provides us the capital to not only survive the crisis, but accelerate our growth again when travel rebounds.”

One thought on “Plats and Parcels: Symphony Hangs New Sign”