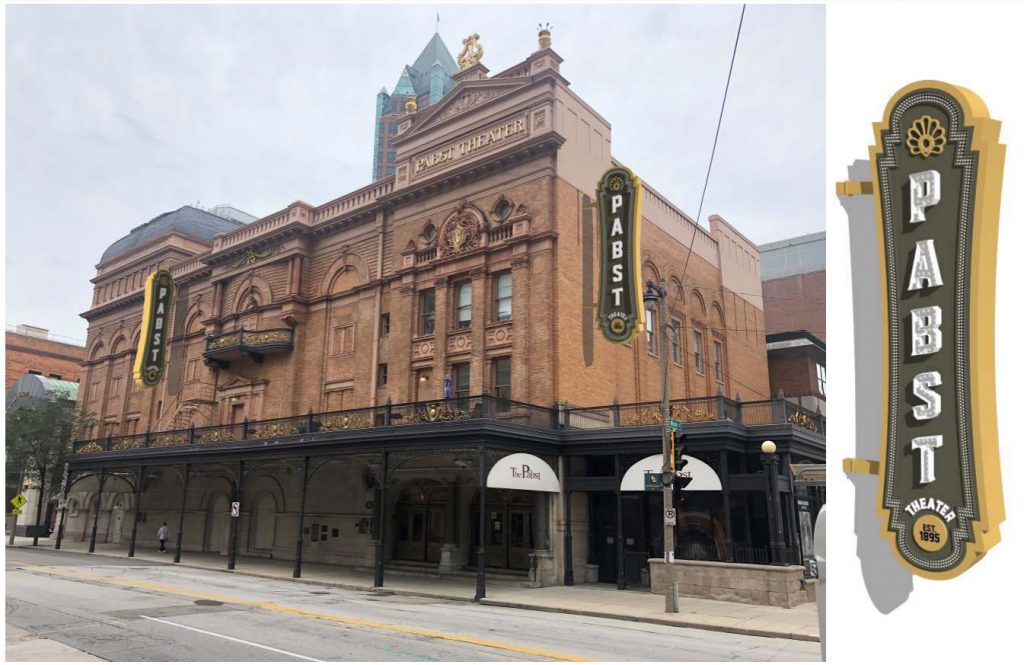 Two new signs on the Pabst Theater will pay tribute to the theater’s past while guiding guests to modern day performances.

The new signs, to be installed along the building’s E. Wells St. and N. Water St. facades, will be 27 feet tall and seven feet wide. A triple-wide track of lights will “chase” around the perimeter of the sign, while the large letters spelling out PABST vertically will light up in a fashion described as “scrolling.”

It’s the third time in the past five years the Pabst Theater Group (PTG) has installed historically-inspired signs on its theaters. A monument sign and marquee were installed on the Riverside Theater in 2015, a series of signs were added to Turner Hall last summer and now the Pabst Theater will get the faux-neon treatment.

The Historic Preservation Commission, which has design oversight over the exterior of the historic theater, unanimously approved the new signs Monday afternoon. But not before the commission’s staff objected to the signs.

“We think the sign on the Wells Street side is a little overscaled in general,” said staffer Tim Askin. The new sign would be smaller than what was there previously, an estimated 35-feet-tall by 10-feet-wide sign. But Askin said it was still too large for the building itself. The HPC staff report warns the new signs could distract drivers.

“We do think it’s a carefully designed sign, but we don’t think it’s quite right for this building,” said Askin. He presented a slideshow of signs on other theaters across the world, including the nearby Marcus Center. “Don’t get into that,” interjected Alderman Robert Bauman, referencing the recent preservation fight. His follow commissioners started laughing.

“Chasing lights were on vaudeville houses and places that were a little more raucous,” said Askin’s co-worker Carlen Hatala. She said HPC staff missed the scrolling function on the Turner Hall sign and would have advised against that.

“If it becomes obnoxious, shut it off or slow it down,” said Bauman.

Bauman, the area’s council representative, said he liked the proposal. He moved approval.

“I’m on the fence but leaning towards acceptance given that we’re not opening the floodgates,” said Commissioner Matt Jarosz. “I would like to restrict the Vegas stuff.” The UW-Milwaukee architecture professor made a friendly amendment to restrict the motion components.

“We did a lot of research on this,” said PTG art director Jason Gierl. “Our goal was to pay respect to the sign that was there from the 1920s to the 1970s.” He said part of the inspiration also came from the large sign on the Chicago Theater.

After an explanation on the sign’s mechanics from Mike Kinsella, president at Janesville-based sign design firm Elevated Identity, Jarosz withdrew his amendment.

“If somebody’s outraged we will tell you to stop it,” said Jarosz.

“There’s no authority to enforce that,” warned Hatala.

The commission didn’t express any concerns. It unanimously voted in favor of the sign.

A large sign is also planned for the Milwaukee Symphony Orchestra‘s Warner Grand Theatre redevelopment, but the commission does not have design oversight because that building, like the Riverside, is not locally historically designated. 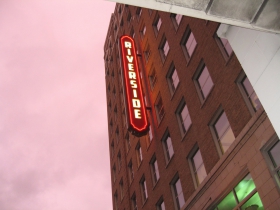 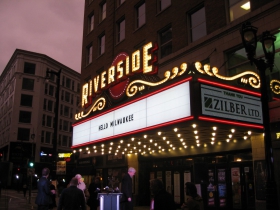 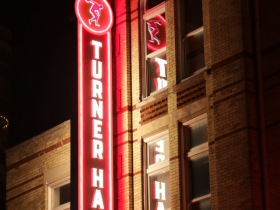 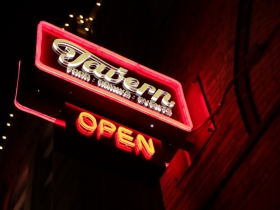 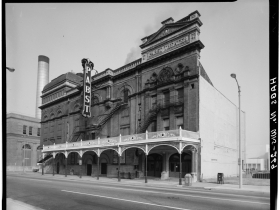 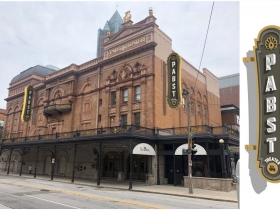