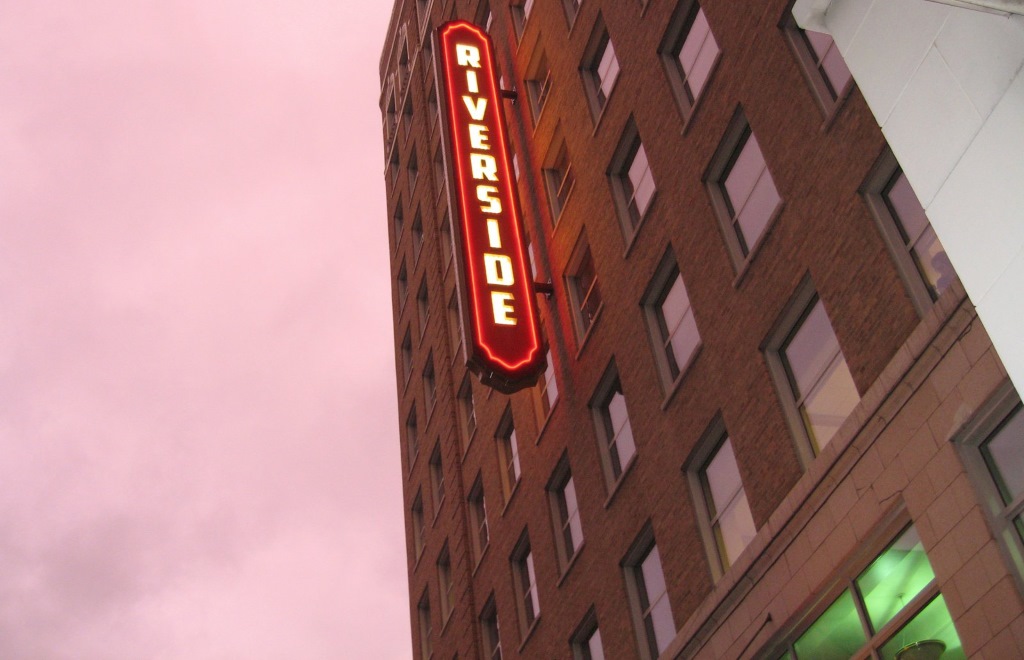 Gales of wind blew down W. Wisconsin Ave. at sunset Monday, December 14th, as the new sign for the Riverside Theater was lit for the first time by Mayor Tom Barrett. Back in September, a press release from the Zilber Group had announced that, in partnership with the Pabst Theater Group, it would erect a new, vertical, retro-style marquee on the 1928 Empire Building, home to the 60,488-square-foot Riverside Theater.

Barrett, who recently announced plans to run for a fourth term, is a local boy whose connection to the Riverside spans decades. Most recently, he said, he heard Jackson Browne perform in the 2,450-seat theater on November 15th.

But it is not merely the mayor’s music appreciation that was inculcated within the theater’s walls. “I trace my intellectual roots to the Riverside,” he told the crowd of 125 onlookers gathered on a closed-off portion of W. Wisconsin Ave.

“Abbott and Costello, the Three Stooges and Lucille Ball all performed here,” he said, eliciting laughter from the assembled multitude. Everybody’s a comedian.

Barrett was joined at the streetside podium by County Executive Chris Abele, Zilber Realty Group’s President John Kersey, Pabst Theater Group’s Gary Witt, and his mentor, the nonagenarian philanthropist Michael J. Cudahy who installed the Chicago native in the director’s chair at the Pabst Theater in 2002, despite Witt’s lack of theater experience. And the Pabst Theater has grown into a colussus under his direction, adding management of the Riverside and Turner Hall.

Witt spoke about his enthusiasm on working with the Riverside and the other venues, and invited the attendees to have a free Miller Lite beer, which was being dispensed from a cart across the street. Apparently this was just a promotional stunt for an upcoming magic act, since the cart vanished as soon as the words were out of his mouth.

The Pabst Theater Group took over operation of the Riverside in 2005 under an agreement negotiated by Cudahy and Joe Zilber, the theater’s landlord since 1962, whose Towne Realty Co. (now Zilber Group, Ltd.) is headquartered in the historic 1928 13-story, 121,617-square- foot building designed by the local architects Kirchhoff & Rose. Zilber died at 92 in 2010.

Kersey, who now runs Zilber’s vast enterprises, announced that the firm and the Pabst Theater Group had agreed to a 15-year extension of their agreement to run the theater.

Over one million people have attended more than 600 events at the Riverside held during the first 10 years of the affiliation, he said.

After the brief remarks from the dignitaries, Barrett hit the switch that set off the giant 40-foot vertical sign and the accompanying marquee, now festooned with scrolls, latticework and flashing bulbs.

It is a bright new attraction to the former Grand Avenue, best seen from the west, yet, alas, invisible from any point on E. Wisconsin Ave. due to the non-parallelism of the city’s streets on either side of the Milwaukee River. Thanks for nothing, Byron Kilbourn!

The vertical sign spells out R-I-V-E-R-S-I-D-E in a sequence of white lights against a red background, while the marquee takes on the same task in a horizontal fashion. A high definition screen broadcasts the venue’s upcoming acts, and was programmed that afternoon to welcome its first onlookers. The vertical sign replaced one that had been missing for decades. The marquee replaced a modern one that was utilitarian yet inoffensive. The work is not an exact match for the original, which included a disk at the top of the vertical sign.

The signs were fabricated by Poblocki Sign Company, a Milwaukee firm that, like Zilber, operates on a national basis.

Now that this marquee has returned, how about doing the same for its contemporary, the long-shuttered Warner (Grand) Theater owned by the Marcus Corporation just a block to the west?

“We’re working on it,” said the mayor.

A little over 30 years ago, the general wisdom was that downtown theaters were dead, and a proposal was floated to turn the Riverside into a shopping mall. As Zilber recounted in his memoir, “How I Built an Empire & Gave it Away,”co-authored with Kurt Chandler, he thought the theater could be saved. It reminded him of his younger days when he would attend shows downtown.

As his successor Kersey said, “Joe Zilber was very proud of his role in restoring the Riverside Theater to its original grandeur. He was also proud of his relationship with Michael Cudahy and the Pabst Theater Group. Joe entrusted them with his theater and as usual, Joe’s instincts were correct.”

Part of the contract between the Pabst Theater Group and its venues is a “Historic Preservation Fee.”

A surcharge of $1.50-3.75 per ticket is directed toward the “maintenance, protection and conservation of The Pabst Theater, Riverside Theater and Turner Hall Ballroom,” according to the group’s website. Those funds were used to produce the new marquee and sign.

In 2016 all balcony seats in the theater will be replaced with funding from the fee. Work in the current year, in addition to the signage, included new doors, plaster repair, upgrade of artist rooms, carpet replacement, reconstruction of the stage floor, and work on the pilings of the building.

Attendees included Downtown BID director Beth Weirick who spent time with Department of City Development Commissioner Rocky Marcoux and “Downtown” Dan McCarthy, a former city development official who now works for Zilber. Ald. Bob Bauman was in the audience, but was not on stage with the other performers. The great majority of the attendees appeared to be downtown residents and office workers, some of whom may have been drawn by the unusual closing of the Wisconsin Avenue bridge just before rush hour. 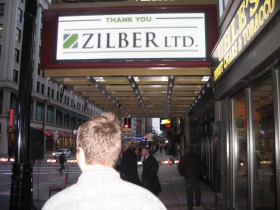 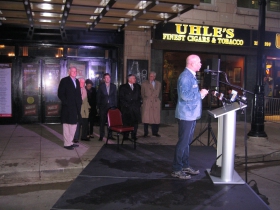 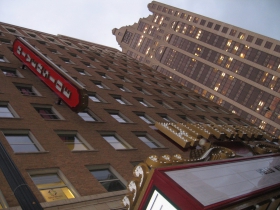 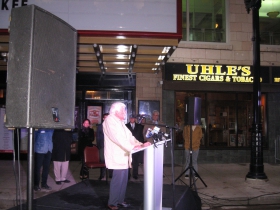 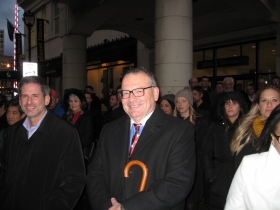 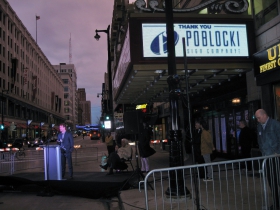 7 thoughts on “Plenty of Horne: New Era for Riverside Theater”