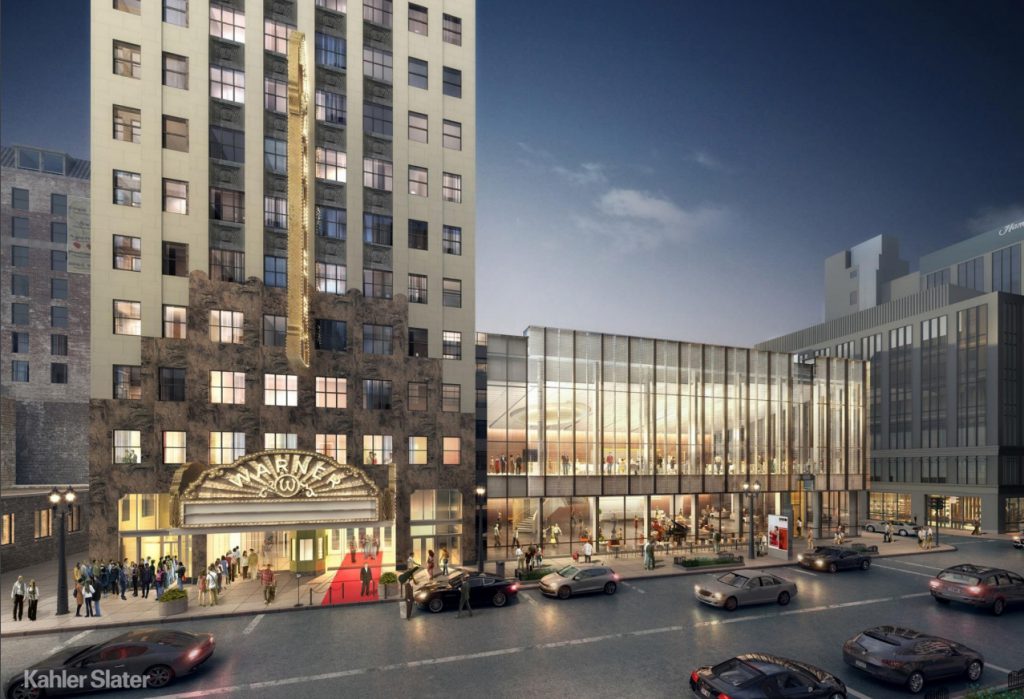 The city continues cutting red tape to clear the way for the Milwaukee Symphony Orchestra‘s $80 million transformation of the long-empty Warner Grand Theatre at 212 W. Wisconsin Ave. into a sustainable future home for the organization.

Monday afternoon, the City Plan Commission was presented the project for the first time. They weren’t tasked with approving any design elements, but instead vacating a portion of N. 2nd St. and an east-west alley on the north side of the theater. They unanimously endorsed the proposal.

Tuesday morning, the Common Council unanimously approved selling a piece of city-owned land that would trigger another land sale and allow the theater complex to be expanded northward.

The two moves will allow the theater’s small stage to be expanded eastward into N. 2nd St. and a new back-of-the-house space to be constructed on the theater’s north facade.

The symphony is redeveloping the theater, originally built in 1930, in order to have more control over their performance schedule and revenue streams. The orchestra has shared the Marcus Center for the Performing Arts with a number of other tenants, including traveling Broadway shows, since it opened in 1969. The rationale for the move was discussed in detail in a 2016 story by Bruce Murphy.

The expansion is necessary to add additional restrooms, dressing rooms, loading docks and space for additional back-of-the-house functions in the 104,955-square-foot, 12-story building. The complex is also being expanded to the southeast. “Apparently people didn’t go to the restroom in the 1930’s,” joked attorney Steve Chernof at a committee hearing on the land sale. Chernof, who leads a public-private partnership to reinvigorate W. Wisconsin Ave, added: “My recollection is there is one small restroom for women and two restrooms for men.”

Chernof told the committee that the symphony, through a contractor, intends to start construction on the project this month. The new music hall would open in 2020. Upper floors in the office tower portion would be sold to a private developer for potential office or housing uses.

For those wondering what the interior of the building looks like, Tour de Force has posted a series of interactive, 360-degree images of the space. Visible among the Art Deco detail is the small stage and remanents of the structure that divided the theater horizontally into upper and lower theaters during the end of its run as a movie theater.

While the council will soon inherit the file approved by the City Plan Commission, the commission will soon enough need to take up another file to dedicate new alleys.

That’s because the symphony must also prepare to move a wall. The east wall of the theater will be moved 35 feet east into N. 2nd St. to accommodate a larger stage.

The project is funded in part with $16 million in federal and state historic preservation tax credits. However, those credits come with strings attached. “The National Parks Service wouldn’t allow us to deconstruct it and rebuild it; we have to literally move it,” said Chernof. He noted there are just two companies in the country that do this work, and the MSO has scheduled the move for October because the early fall month is the least windy. Department of City Development representative Dan Casanova told the council’s Zoning, Neighborhoods & Development Committee a series of utilities in the street need to be relocated prior to the move.

The entire MSP project is kind of miraculous: it’s taken not only unprecedented fundraising by the symphony, but also a fortuitous alignment of landowners. The theater previously sat on three different parcels, with three different owners, and Marcus Corp. having a long-term lease. “That was a huge hurdle that past efforts in redeveloping the theater weren’t able to solve,” Casanova told the commission Monday. Casanova, echoing earlier comments by Alderman Robert Bauman, praised Marcus’ commitment to keeping the building’s interior heated and secure after the theater had closed.

Adding to the complex details, the symphony’s real estate affiliate TNSH LLC (“The New Symphony Hall”) has also acquired the building at 200-208 W. Wisconsin Ave. for $1,238,000. Kiku Japanese Restaurant at 202 W. Wisconsin Ave. has closed as a result of the acquisition. The two-story building will be transformed into a glassy front door for the music hall and will include food and beverage space for before- and after-show functions.

Kahler Slater is leading the design on the project.