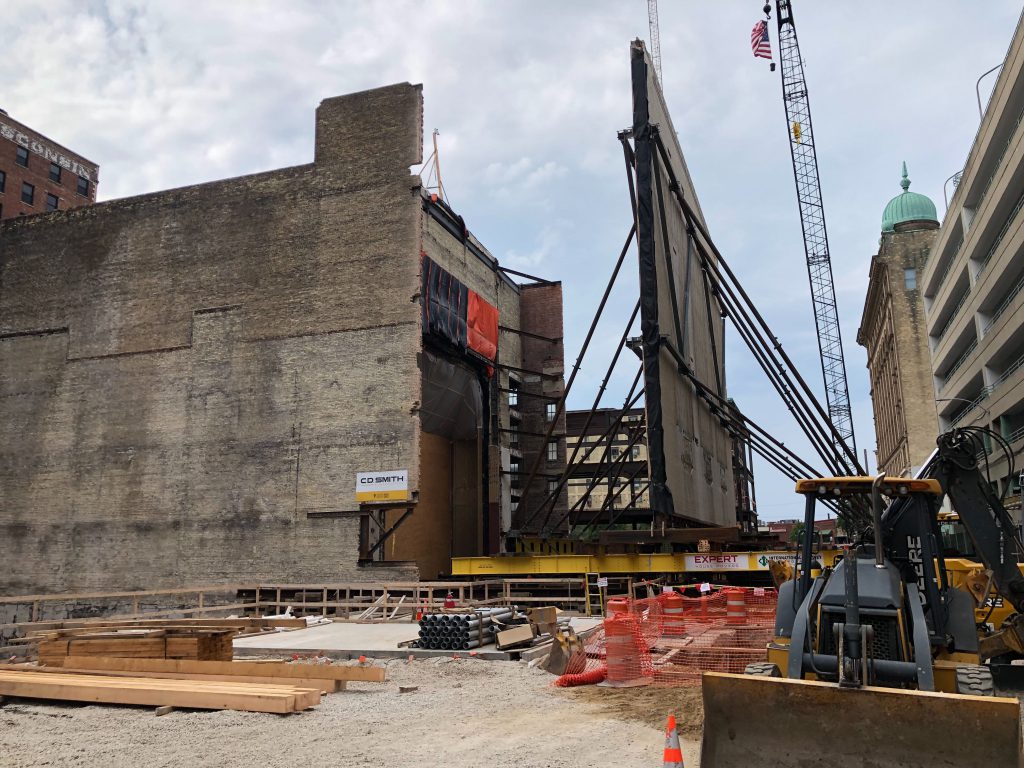 The Milwaukee Symphony Orchestra (MSO) has nearly completed the most harrowing part of its $89 million transformation of the Grand Warner Theatre into a music hall.

The theater’s rear wall has been moved, as one 625-ton piece, almost 35 feet east to accommodate building a larger stage in the former movie theater. The move, required to access up to $19 million in federal and state historic preservation tax credits, required general contractor CD Smith to partner with historic moving specialists International Chimney Corporation to lift and inch the wall forward using hydraulic jacks.

After the wall finally started moving just after 10:30 a.m. Tuesday, the work proceeded and was nearly complete by 4:30 p.m. MSO president Mark Niehaus told Urban Milwaukee that it was effectively in place, needing only to be welded into place Wednesday morning. The contracting team had originally allocated three days to complete the move.

Should we pray for a calm evening with little wind? Niehaus laughed at the suggestion before stating that it is rigged to withstand approximately 110 mile-per-hour winds. A construction worker walking by interjected: “it’s not going anywhere.”

The approximately 25-worker crew that executed the move found support from an unlikely source. According to Niehaus, a case of Dove soap was used to help glide the wall across the steel supports.

The move drew plenty of attention from passersby and others that made a special trip Downtown to see the move. Members of the contracting team were well aware they were doing something special. “It’s unique,” said CD Smith project executive Cory Henschel. “I can’t say that I will ever get to do something like this in my career again.”

Built in 1931, the brick wall was already braced by steel internally and a substantial amount of exterior bracing was added. Henschel stressed that safety was paramount to the long-planned move, and that wasn’t easy to accomplish. Throughout the move construction workers would set and reset various braces and clamps within a few feet of the massive 100-foot-wide, 86-foot-tall structure.

Once the wall is welded into place Wednesday morning plenty of work remains, including reattaching 1,500 square feet of terracotta elements to the wall, building a new structure to link the wall back with the theater and installing new theater seats. Urban Milwaukee went on an interior tour of the project shortly before the wall started moving, including a look at the temporary wall that protects the theater’s interior from the new 35-foot gap between the building and its transplanted eastern wall.

Restoration specialists, including New Berlin-based Conrad Schmitt Studios, will soon work begin work on restoring the building’s interior including a mural and an extensive amount of ornamentation.

A glass lobby structure will be constructed on the corner of W. Wisconsin Ave. and N. 2nd St., on the site of the former sushi restaurant, which itself was built on the site of a former office tower. All have used the same foundation, but everything above ground has now been scraped clean for the new lobby. A rear expansion of the theater, including bathrooms and dressing rooms, is also underway with much of the steel structure completed. The 12-story office tower that rises above the theater’s entrance at 212 W. Wisconsin Ave. will have five of its floors redeveloped into administrative offices for the symphony and other back-of-the-house space. Remaining space at the top of the tower is intended to eventually be sold to another developer.

The city has allocated $6.25 million to the project, including for the rebuilding of N. 2nd St. A substantial amount of that will go towards rebuilding eight underground utilities that would otherwise end up underneath the expanded building. N. 2nd St. will become a one-way southbound street as part of the project. The city has hired Benesch, TKWA UrbanLab and SmithGroup to redesign the street into a pedestrian-friendly corridor from W. Wells St. at Postman’s Porch to W. Clybourn St.

Design work on the symphony project is being led by Kahler Slater. 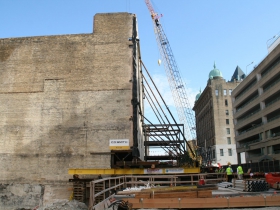 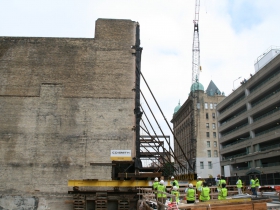 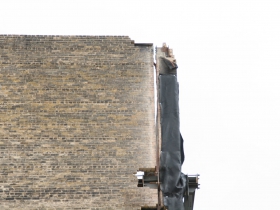 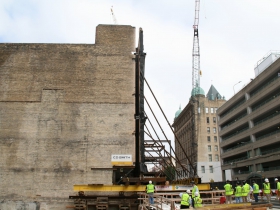 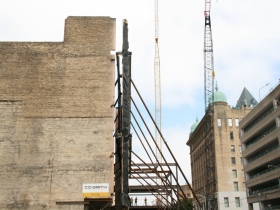 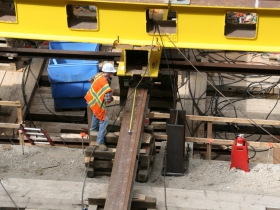