Full Speed Ahead on Symphony Project

Prep work for moving wall 35 feet into street is underway. 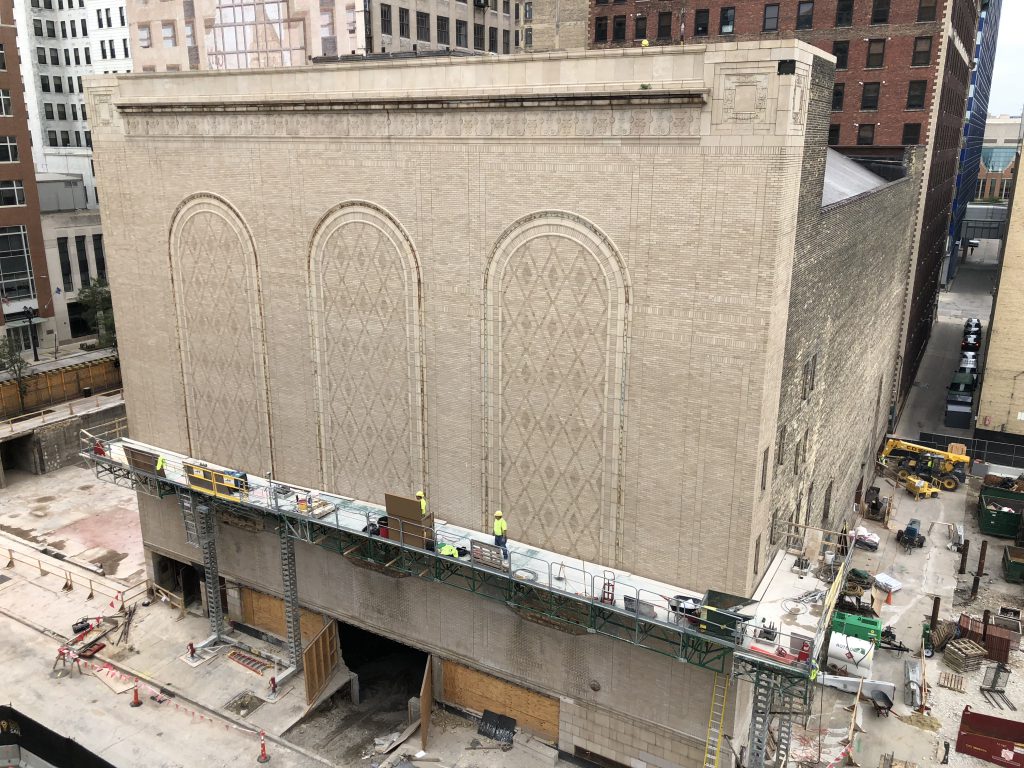 Preparation Work for Relocating The Wall at the Grand Warner Theatre. Photo by Jeramey Jannene.

The long-anticipated rebirth of the Grand Warner Theatre is quickly moving towards reality. The Milwaukee Symphony Orchestra is well underway on construction of its $89 million plan to convert the former theater and office building into a 1,750-seat music hall and modern offices.

The Symphony broke ground on the project on June 21st, although asbestos abatement was already well underway at that point. While work inside the theater is hard to gauge from the street, an adjoining building has been demolished and work is underway to relocate a wall to allow for an expanded stage.

The project, located at 212 W. Wisconsin Ave. in the heart of Westown, is being funded almost entirely with private, philanthropic support. Chief among the donors are David and Julia Uihlein, who gave to the project four separate times. The Uihlein-founded Bradley Foundation also chipped in $15 million.

The symphony sought the theater out not only for the impressive acoustics of the space, but also as a chance to control its own destiny. The MSO is currently just one of many tenants at the Marcus Center for the Performing Arts, and isn’t able to always schedule shows on marquee dates. Now it will not only be able to schedule shows as it sees fit, but the organization can rent out the space on off nights to other organizations. The move is expected to add significantly to the bottom line of the organization.

The demolished building, most recently home to Kiku Japanese Restaurant, was formerly Art Deco in design, although much of that ornamentation had been lost by countless remodeling jobs. A glassy lobby will be erected in its place, ironically using the foundation of a building that predates the two-story restaurant building. The Loan and Trust Building, a seven-story structure, was demolished nearly 100 years ago, but it’s foundation was reused by the 1930’s structure, and now will again be used by the symphony.

Adding to the complexity, the theater is part of a 104,955-square-foot, 12-story building. Five floors of the tower will be converted to offices, warm-up space and a reception space for the symphony, while more of the space will be marketed for sale to a developer for a future conversion to housing or redevelopment as office space.

The theater itself has been vacant since the 1990’s, but the Marcus Corp. maintained the building since shutting its theater in the complex. For those wondering what the interior of the building looks like, Tour de Force has posted a series of interactive, 360-degree images of the space. Visible among the Art Deco detail is the small stage and remanents of the structure that divided the theater horizontally into upper and lower theaters during the end of its run as a movie theater.

The symphony is led by its onetime trumpeter Mark Niehaus. Fundraising on the approximately $139 million campaign, which includes debt retirement and the creation of an endowment, is being led by board president Andy Nunemaker.

At a mid-May Greater Milwaukee Committee meeting, Nunemaker laid out the symphony’s strategy as “killing three birds with one stone,” and at a bargain price. The organization faced a $3.5 million annual structural deficit according to Nunemaker, and initiated the campaign to reinvent how the symphony operates. The dedicated building, allowing the symphony to control its schedule, its hall and its parking, is planned to yield the organization an additional $2 million in annual income. Creating a more substantial endowment is planned to yield $1 million annually. And the final piece of the puzzle is stabilizing the employee pension fund, which will save an estimated $700,000 annually.

Design work on the complex is being led by Kahler Slater, with CD Smith serving as the project’s general contractor.

Beyond philanthropic support, the project relies on $16 million in federal and state historic preservation tax credits to support the redevelopment. Strings, in the form of oversight from the National Parks Service, come with the valuable credits. The theater has effectively no backstage and only a 15-foot-deep stage, being that it borders N. 2nd St., something that just won’t work for symphony performances.

To address the issue, the city blessed a plan to relocate the theater’s rear wall 35 feet east into the street, even contributing $750,000 from a tax-incremental financing district to support the move. But under the guise of ensuring the historical accuracy of the project in exchange for the tax credits, the National Parks Service said the contractor can’t simply disassemble and later reassemble the wall in its new location.

Instead, come October, a highly-specialized national firm will begin the slow task of literally moving the wall, inch-by-inch, the whole 35 feet. Traffic will then be narrowed to two lanes and a new, historically accurate structure will reconnect the wall with the rest of the theater.

Mandel Group COO Robert Monnat, who is serving as a consultant on the project, recently tweeted a photo of the project team reviewing plans for the move alongside the caption “how to move a million pound wall.”

Why October for the move? Attorney Stephen Chernof, another consultant assisting on the project, told the Common Council’s Zoning, Neighborhoods & Development Committee in May that fall month was selected because it’s the least windy month. The consulting team didn’t have much of a choice for a contractor to do the move, Chernof said there are only two firms nationwide that do the work.

The theater portion of the building will be expanded to the north as well to accommodate new restrooms and dressing rooms. 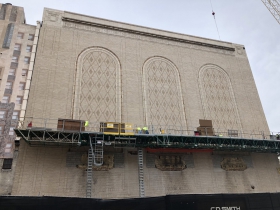 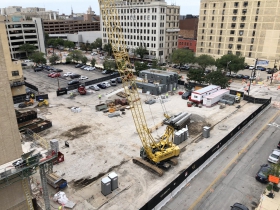 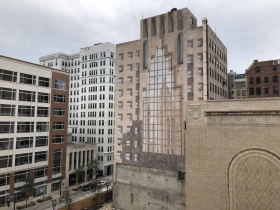 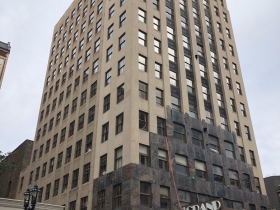 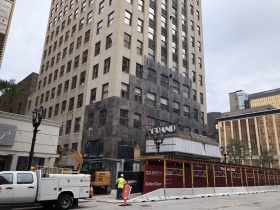 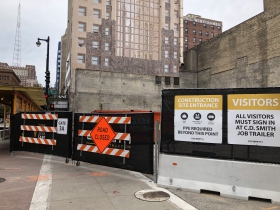 One thought on “Friday Photos: Full Speed Ahead on Symphony Project”