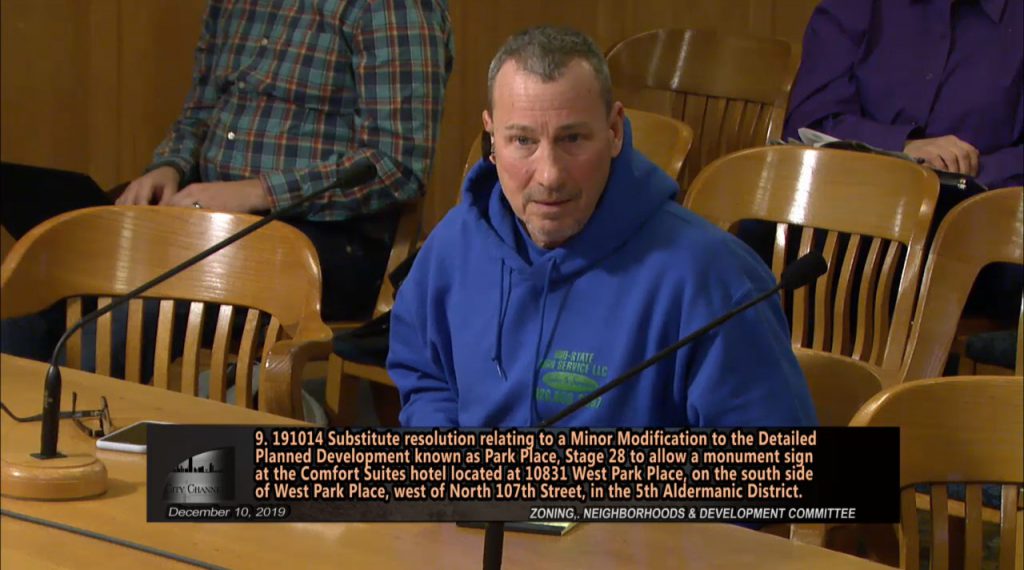 Greg Jens. Image from the City of Milwaukee/Channel 25.

The hotel merely wanted a zoning change so it could erect a new “monument” sign advertising its services to drivers passing by. But that simple request by a Milwaukee business soon became a much more complicated story.

Initially Common Council members had no issue with the proposed sign for the Comfort Suites at 10831 W. Park Pl.

“It was just a new sign,” said Alderman Russell W. Stamper, II when the measure was before the full council for adoption in November. It had been referred to the full council without objection. But when the proposal was again debated today, having been referred back to committee after a complaint by Alderwoman Chantia Lewis, Stamper had a different message: “Sorry we just can’t support such a racist policy.”

Concerns about racism arose after Lewis detailed her experience with the hotel. “I have first hand witnessed their lack of compassion, community involvement,” said Lewis on the council floor. She said she attempted to rent a room with her family after suffering a power outage at her house. “As I tried to check in, they turned me away immediately once I showed them my ID,” said the African-American alderwoman. And so the council, including area Alderwoman Nikiya Dodd, agreed to send the file back to committee for further review.

Then there was the fact that the hotel’s owners didn’t appear at today’s Zoning, Neighborhoods & Development Committee. Instead, Greg Jens of Oshkosh-based Mid-State Sign Service showed up to present the plan for the sign.

Where are they? asked Bauman. “They are not here sir.”

“There was some issue about a policy that the hotel has. The policy is that they don’t rent to residents of Milwaukee,” said Jens.

“I have family here in Milwaukee,” said Jens. “I travel to Milwaukee to do so sign work, to visit my family. I have to state that I spoke to several of the hotel employees on my recent stay here. They are very happy with this policy, in that it allows the people of Milwaukee, the residents of Milwaukee, to have their family come to this location and be free of any potential dangers that they believe happen at any other hotels such as drug use.”

“I can’t say what is their reasoning for this, but yes, they do have a policy,” said Jens. “It’s very similar to any restaurant that has a sign ‘we reserve a right to refuse service to anybody.'”

“Very good,” responded Rainey. “We’ll make sure that’s reflected in the record. But today we’re going to speak specifically to what is germane, the monument sign.”

Jens continued on to say that the no-rental policy applied to individuals residing within 30 miles of the hotel.

“I didn’t hear him say nothing,” said Stamper. “I would advise we say nothing and vote,” said Bauman.

Stamper, Bauman and Rainey voted no. Alderwoman Milele A. Coggs abstained without explanation. Perez also abstained, but said he was doing so because he was out of the room for part of the discussion.

“May I just have a moment to explain?” asked Jens.

“I think there will be opportunities in the future,” said Rainey.

But Jens insisted. “You ain’t hurting me, you’re just hurting your own people,” said Jens, who is white, to a committee where four out of the five members are not.

Reached by phone Wednesday, Jens told Urban Milwaukee that “I feel the zoning committee should deal with zoning. Issues of discrimination should be dealt with in the court system.”

Multiple calls to the hotel’s ownership group, Monona Lodging, went unanswered. The group is recognized as a “foreign business corporation” in state records with an Illinois address. It acquired the hotel in May for $3.9 million. State records indicate Anup Patel is the company’s registered agent.

A phone call to the hotel with an attempt to book a room as a Mequon resident resulted in a rejection and an explanation that the policy is to block all room reservations within 30 miles.

The northwest side Comfort Suites policy is posted on the hotel’s website. “This property does not rent to local area residents, you must live outside a 30-mile radius from the hotel,” reads the hotel alerts section.

The matter will again head to the full Common Council. Department of City Development planning manager Vanessa Koster, before Jens made his presentation, said the department recommended the zoning change to allow the new sign be approved.

Odds are that recommendation will provoke some lively discussion when the full council again takes up the issue.