By Alana Watson, Wisconsin Public Radio - Sep 20th, 2019 01:11 pm
Get a daily rundown of the top stories on Urban Milwaukee 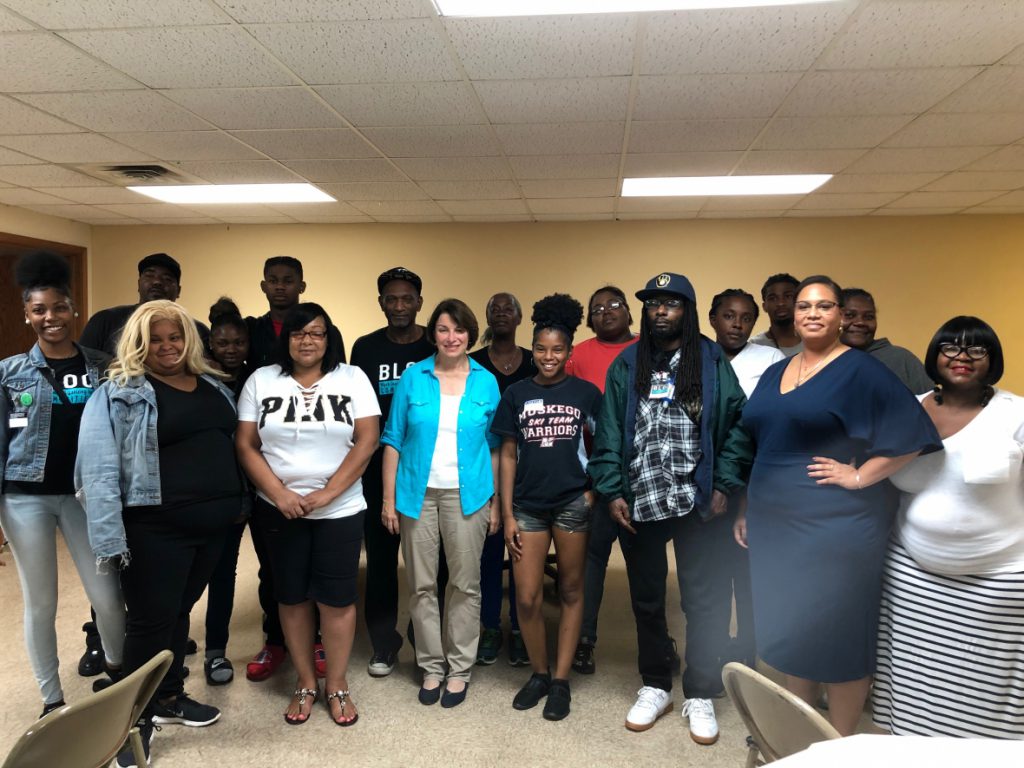 U.S. Sen. Amy Klobuchar met on Thursday with members of Black Leaders Organizing Communities (BLOC) at Redemption Fellowship Church on the north side of Milwaukee. Photo by Alana Watson/WPR.

Democratic presidential candidate and U.S. Sen. Amy Klobuchar made a campaign swing Thursday through Milwaukee, discussing democracy and voting rights with members of the community.

Klobuchar, who is seeking the party’s nomination among a crowded field of contenders, is making trips to traditional Democratic states that flipped in 2016 during the election of President Donald Trump.

The Minnesota senator said she seeks ways to bolster voting.

“Part of this is (organizing) people to vote and getting them out to vote,” Klobuchar said. “The other part is advocating for laws and pushing for laws that are fair so that all people can vote. Otherwise people don’t have an equal vote.”

Klobuchar, who won her third term and captured rural counties that Trump carried in 2016, made three different stops around the city, including Redemption Fellowship Church on the city’s north side. Klobuchar met with members of Black Leaders Organizing Communities, or BLOC, for her second stop. BLOC is an organization that coordinates political action within the black community.

She talked about ideas that she said she would implement if elected president, including same-day voter registration and automatically registering 18-year-olds to vote.

“We should be able to make it easier for people to vote,” Klobuchar said. “It should be one of the big priorities of our government. That’s just one idea of how we do it.”

Members of the organization focused on asking the senator about criminal justice reform, specifically about the controversial 1994 crime bill signed into law during President Bill Clinton‘s administration.

Angela Lang, executive director of BLOC, spoke for the organization and said they didn’t believe investing in the criminal justice system would actually stop crime. She said the bill has increased police presence in the black community.

A few members of BLOC weren’t pleased with Klobuchar’s visit.

Paris Randolph, who is a civic ambassador for the organization, said he wished the senator focused more on questions that concerned them.

“She didn’t get a chance to answer all of our questions,” Randolph said. “I wanted to ask her about reparations, what do you think about that? You talk about restoring stuff and helping the black community, but there are some people that can’t get jobs, that needs some help.”

As part of her campaigning, Klobuchar will also be making a stop in Detroit.

“Amy Klobuchar once had a carefully crafted façade as a Midwestern moderate, but her agenda would rob hard-working Wisconsinites out of money in their paychecks and jobs across the state,” Merritt said. “President Trump has continued to fight for higher wages and job growth, and Wisconsinites aren’t looking to end the ongoing success.”