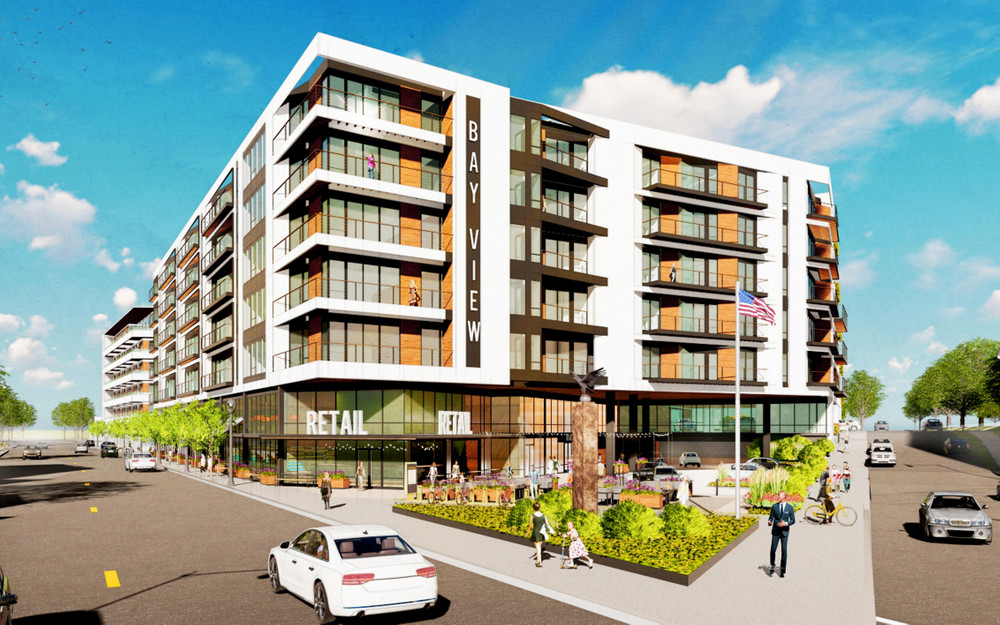 The proposal includes two six-story, V-shaped buildings that would contain five floors of housing above one floor of commercial space. The buildings would be the tallest along S. Kinnickinnic Ave. and then step down floor-by-floor towards the south. The terraced design is intended to better match the height of surrounding houses according to project architect Matt Rinka.

Rinka, the founder of Rinka Chung Architecture, led the presentation of the building’s design at a meeting lasting more than two hours at Bay View High School. Approximately 100 people were in attendance, with the majority indicating opposition to the project.

Lurie would form the site by purchasing ten properties from an investment group led by Tim Olson along the 2700 block of S. Kinnickinnic Ave. Lurie’s F Street Group would also acquire the BMO Harris Bank branch site. The bank would relocate to the first floor of building proposed for Bella’s Fat Cat site.

The second building, which Rinka says is years away at the earliest, would be built on a site at 2701-2729 S. Kinnickinnic Ave. Houses at 2713, 2717 and 2721 S. Herman St. would be demolished to form the site. The developer also intends to seek the vacation of the portion of the alley between S. Logan Ave and S. Herman St. that runs through the site.

A plaza at the northwest corner of the site is envisioned by Rinka that would be formed by vacating the segment of E. Russell Ave. that separates a plaza containing a World War II memorial from the BMO Harris Bank parking lot.

Rinka said no choice has been made regarding whether the buildings would contain apartments or condominiums. A condominium building of this size has not been built in Milwaukee since the Great Recession. He said the development assumes an investment of $110,000 to $120,000 per unit.

When Rinka first showed renderings of the project, people in the audience shouted “eww,” “yuck,” “don’t want it, turn it off” and “that’s too much.”

“This is fully open and transparent,” said area Alderman Tony Zielinski who convened the meeting. “There has been no decision that has been made on my part whatsoever.” The alderman, who is running for mayor, said he has routinely represented the interests of residents by driving development towards S. Kinnickinnic Ave. and away from residential side streets.

The project team said construction could begin in fall 2019 at the earliest. That was met with concern from many at the meeting. Area resident Kathleen Kirchoff shouted from her seat: “one year away from groundbreaking is ridiculous. It doesn’t give me a chance to move.”

Parking for the project was a big source of controversy. Rinka and Lurie both characterized the plan as “overparked” with 400 spaces being built into the buildings, including 70 for the commercial tenants. “We’re actually cutting into the site as much as possible,” said Rinka about hiding the parking underground as a result of the 12-foot grade change on the site.

Lurie, through his F Street Group firm, and Rinka have collaborated in the past on a number of projects, including the recently completed The Forty Two office building, brewery and restaurant at the former Pabst Brewery. Lurie’s company also owns the Pizza Man restaurant group, with Rinka having served as architect for the restaurants. Rinka is also leading the design of the Michels Corp. campus in the northwest corner of the neighborhood.

Multiple representatives from the Department of City Development confirmed in advance of the meeting that they have not had a discussion with anyone regarding the potential development of any of the affected properties.

Lurie has the properties under contract for purchase.

The project is one of many in the area, including a large apartment building at the north end of Bay View by New Land Enterprises, two projects by developer Scott Genke, the Stitchweld project and the recently completed Vue apartments. 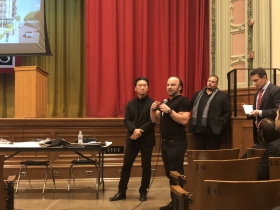 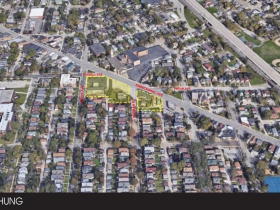 In an interview with Urban Milwaukee, Lurie and Rinka acknowledged that the feedback they received was that “the height and density is an issue.” Lurie said the project team would reconvene to explore solutions.

Zielinski told Urban Milwaukee: “The majority of people feel the project is too big for the neighborhood.” He said that he anticipates many more meetings on the project and hopes to create an “open and transparent dialogue.”

When asked about the lack of Department of City Development presence, Zielinski responded: “It didn’t come up in the discussion.” The alderman has publicly sparred with DCD Commissioner Rocky Marcoux for years. He said the department has routinely supported projects in the neighborhood, even ones he opposed, including the development of the Army Reserve site.

Starting on Monday people can submit comments on the building to the project team by emailing kk@rinkachung.com.

One thought on “Eyes on Milwaukee: Many Oppose Kinnickinnic Ave. Buildings”