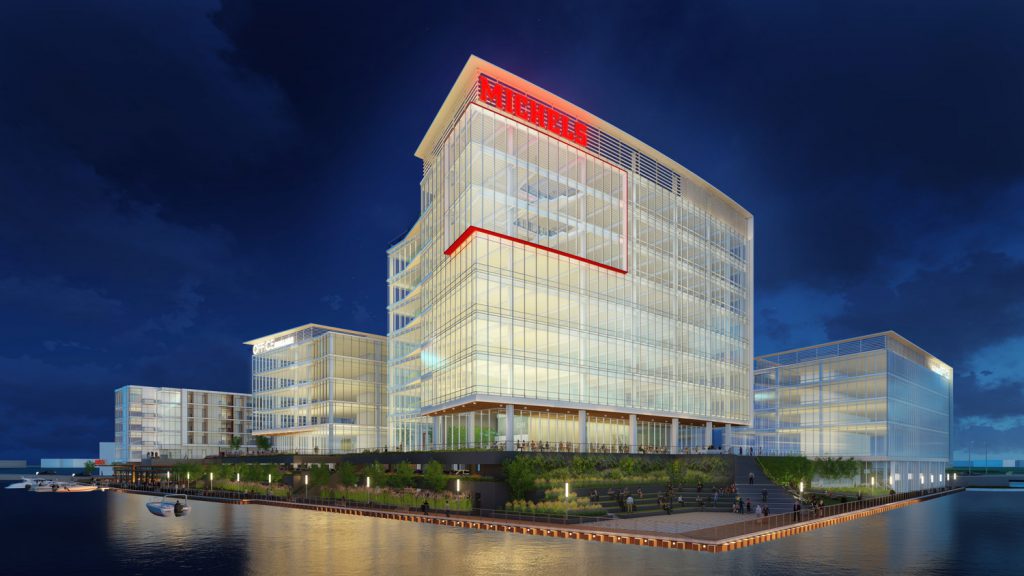 The Michels Corp.‘s $100 million redevelopment of the six-acre site at the northwest corner of S. 1st St. and W. Becher St. continues to move forward. The infrastructure and utility contractor announced the project, known as River 1, in early August. The phased project is intended to include a mix of office buildings, apartments, a hotel and commercial space.

Tuesday afternoon the Redevelopment Authority of the City of Milwaukee (RACM) board unanimously advanced a plan to provide $8.1 million in financing to the project’s $49 million first phase. The financing package includes $4.4 million from Michels itself, that would be repaid through future, incremental property taxes. The city would contribute $3.28 million from general purpose borrowing and $400,000 from a RACM revolving loan fund for brownfield cleanup.

The first phase of the project includes an eight-story, 130,000-square-foot office building at the northwest corner of the site, a 500-stall, below-grade parking garage and a new Milwaukee RiverWalk segment as well as other publicly-accessible areas. The company, based in Brownsville (near Fond du Lac) will initially occupy the top three floors of the new building, designed to be highly visible from nearby Interstate 43/94, and lease out the remaining floors. Four additional buildings are planned for future phases of the project, as well as additional parking.

The financing package includes $3.4 million to construct a 1,030-linear-feet segment of the Milwaukee RiverWalk, a $400,000 cash grant for brownfield cleanup, $2.5 million for the reconstruction of W. Becher St., a $1 million grant for the creation of 250 jobs and $750,000 for city administrative and contingency costs. The riverwalk costs follow a standard city formula where the city pays 70 percent of the construction costs in exchange for an easement guaranteeing public access. Department of City Development representative Alyssa Remington told the board the $400,000 cleanup represents 13 percent of the estimated cost to remediate the site, which is the percentage of the site that will be publicly accessible.

As is standard policy on TIF deals valued at $1 million or more, Michels and its subcontractors will be required to perform 40 percent of the work hours on the project’s construction by unemployed or underemployed city residents certified by the city’s Residents Preference Program. A 25 percent requirement is also in place for city-certified Small Business Enterprises led by minorities or women.

The whole project is made possible by a confluence of factors, most notably the growth of Michels and the desirability of Milwaukee. Michels, a privately-held company with over 6,000 employees spread across the country, is adding an infrastructure division and needs to hire a mix of project managers and engineers. “People that, quite frankly, are easier to recruit in Milwaukee than other places,” said Michels vice president and Chief Legal Officer David Stegeman.

The site today has an assessed value of $1.3 million. The city estimates that after Michels complete the first phase of the project, the site’s value, including the new structures, would rise to $23.3 million.

The city expects Michels’ $4.4 million financing component to be paid back by 2034, with the city funds being returned by 2037.

The proposal will next go before the Common Council’s Zoning, Neighborhoods & Development Committee.

The TIF funds only support the creation of the first building, but Michels remains committed to building the rest of the site said project architect Matt Rinka. “We have had five different hotel groups contact us since we made the announcement, so we think we are on to something,” said Stegeman.

Michels, who is soliciting development partners with the help of Blair Williams, is planning an apartment building for the northeast corner of the site and a hotel for the southest corner. The firm anticipates breaking ground on those projects as the market dictates.

Commercial space will be included in those first two buildings, including an “anchor restaurant” along the river at the project’s northeast corner” and a space built to the sidewalk at the project’s southeast corner. The buildings will be set back from S. 1st St., a choice Rinka defended by noting that the site slopes down towards the river, while the street doesn’t. “If we were to build right up to the street, the retail would be below grade,” said Rinka.

The sloping site allows for the parking garage to be hidden. A plaza, designed as a central green space, is planned for the center of the development atop the garage. “When you start looking at Google Maps of this neighborhood, the lack of green space is really evident,” said Rinka.

Two additional office buildings are planned, but Rinka said the building at the southwest corner of the site could change its use depending on demand. “That’s really up for debate right now,” said the Rinka Chung Architecture head.

Michels isn’t the only beneficiary in the deal. Beyond the substantial new riverwalk segment, the city will rebuild W. Becher St. in 2020. The rebuilt street will be narrowed, favoring people over vehicles. Remington told the board that the city intends to add bicycle lanes and LED street lighting to create a more welcoming environment for pedestrians and cyclists.

The $2.5 million set aside in the financing package will pay for rebuilding a half-mile segment of W. Becher St. from the freeway to S. Kinnickinnic Ave. “We want a nice gateway coming into Bay View off the freeway,” said DCD’s Lori Lutzka.

The S. 1st St. bridge is scheduled to open in November.

One thought on “Eyes on Milwaukee: City Advances $8.1 Million TIF for Michels”