What will the city pitch to Democratic Party? 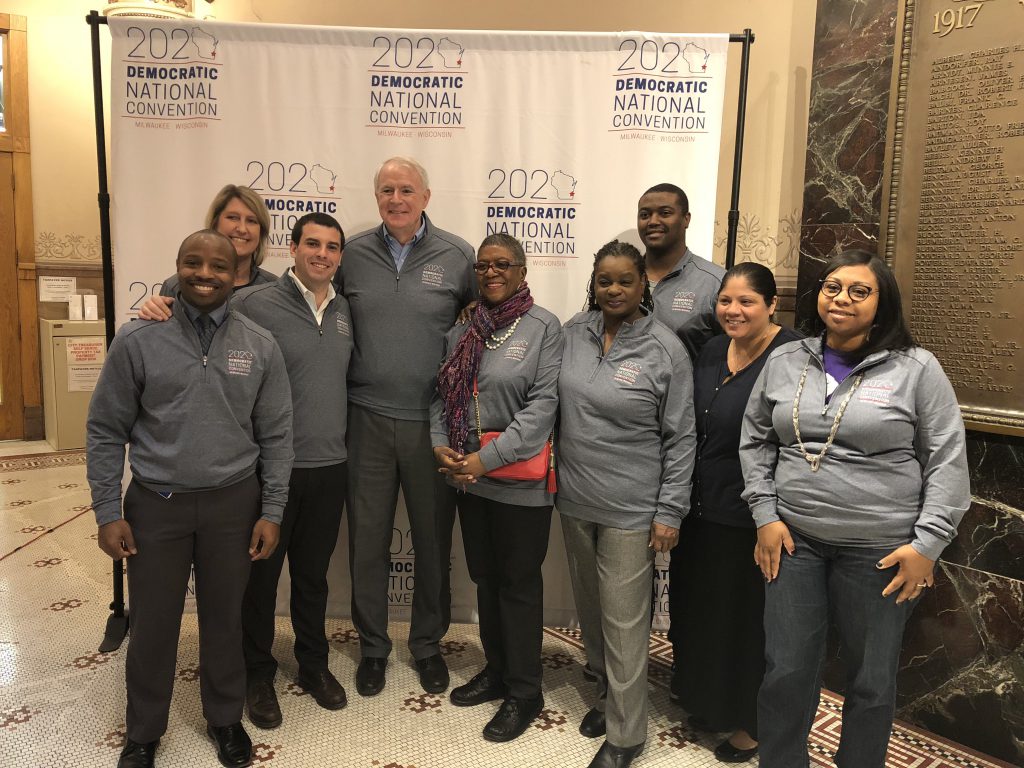 Those items will be at the core of Milwaukee’s pitch for the 2020 Democratic National Convention. The city, through a committee chaired by Milwaukee Bucks vice president Alex Lasry, is making the bid. Milwaukee is the first city to announce publicly their intent to land the convention.

“There is nothing that Milwaukee doesn’t have that any of the top tiers cities have. Yet we are consistently left out of the conversations when it comes to company relocations and best places to live. By winning this bid we think that we will show that Milwaukee is a place that needs to be talked about,” said Lasry at a press conference announcing the bid.

“I guess I’m old enough to have gone to a couple of these conventions,” said Congresswoman Gwen Moore. “So I know everything that went wrong in some of these cites. I can tell you that we have learned from those mistakes. We will have the transportation assets, the room assets and all of the human resources we need to make this the best convention the Democratic National Committee has ever had.”

Tim Sheehy, president of the Metropolitan Milwaukee Association of Commerce, said: “I am here representing the green party. That is the opportunity the convention presents to bring tens of thousands people to the city to spend money and create jobs.” An affiliate of the MMAC is serving as the fiscal agent for the effort.

“Whether we’re bidding for the Democratic convention or the Republican convention, I’m certainly going to make the argument that you want to be here,” said Mayor Tom Barrett. He said the city’s location in a swing state gives it extra importance to both parties.

Barrett, a Democrat, said in addition to the swing state status the city is well situated because of the growth Downtown and the growing number of hotels in the region. He said his experience at the 2016 Democratic convention in Philadelphia showed him that suburban hotels will be an asset because Milwaukee doesn’t have the traffic issues that other cities have. “We’re very, very confident that we have the hotel rooms and that was one of the stumbling blocks we have had in previous years,” said Barrett.

The committee will need to raise between $750,000 and $1 million to formally make the bid, and Lasry says they are well on the way there. He estimates the final cost will be between $50 million to $80 million, with the national party and other non-local organizations contributing millions to the effort.

The Milwaukee bid will be reviewed this summer by an eight to 10 person team from the national party according to Lasry. The convention is expected to make a $200 million economic impact.

The Philadelphia convention, held in late July 2016, attracted approximately 50,000 attendees, including 4,763 delegates. Among those delegates were Moore, Barrett and Lasry. The federal government allocated $43 million to the city for security purposes. The 2016 Republican National Convention was held in Cleveland.

Lasry’s father, hedge fund operator Marc Lasry, is co-owner of the Milwaukee Bucks and a prominent Democratic donor. His son, a Milwaukee resident since the acquisition of the Bucks, said “I don’t think any single person can swing the committee” and went on to note that there are bigger donors to the party than his father.

Absent from the list of necessities is an expanded convention center. While Lasry says it would be nice to have, the proposed $225 million expansion isn’t part of what the city will pitch.

In response to a question, Barrett said that the convention could serve as a catalyst for extending the streetcar to the arena. In 2016 the city approved a financing plan to extend the streetcar to the arena, but it relied on a federal grant that has not been awarded. The infrastructure proposal from President Donald Trump would eliminate the popular TIGER grant program that the project is budgeted to rely on.