He was informed of problem, did nothing, then misled public about it. 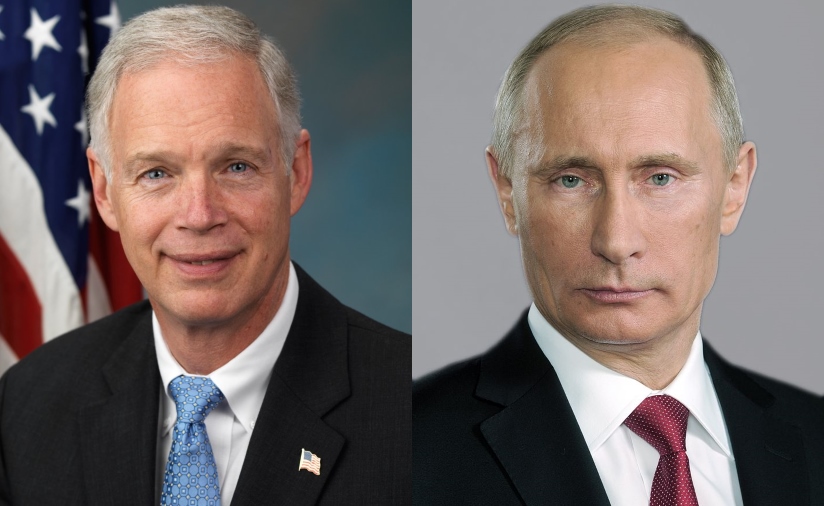 Yesterday, in an interview with Wisconsin Public Radio, Sen. Ron Johnson made it clear he takes a very tough stand on Russia and its leader Vladimir Putin.

“I’m very wary of Vladimir Putin,” Johnson said. “There have been close to 30 suspicious political assassinations since he has taken power.”

As for Putin and Russian using cyber hacking to interfere with America’s elections, he declared, “I take it very seriously. As chair of European Subcommittee on Foreign Relations, we’ve held a number of hearings on Russia’s disinformation campaign and how they are trying to de-stabilize certainly Eastern European countries, but just their destabilization efforts around the world.”

Indeed, Johnson had “heard firsthand of Russia’s efforts to destabilize and interfere in the internal affairs of its neighbors,” he told the Wisconsin State Journal.

And yet back in mid-September when Johnson was informed by intelligence leaders of Russian hacking and was asked to join a bipartisan effort to warn Russia to desist, Johnson did nothing.

To date no one in the Wisconsin media has even reported that Johnson attended this intelligence briefing, much less that he had no response to the information.

The details of the mid-September meeting are in a story by the Washington Post, which reported that President Barack Obama had dispatched his counterterrorism and homeland security adviser, Lisa Monaco, FBI Director James B. Comey and Homeland Security Secretary Jeh Johnson “to make the pitch for a ‘show of solidarity and bipartisan unity’ against Russian interference in the election,” as a senior administration official told the Post.

As chairman of the Homeland Security and Governmental Affairs Committee, Johnson was one the so-called “Gang of 12,” the top 12 congressional leaders, who were invited to the meeting. (House Speaker Paul Ryan also attended the meeting.) Johnson later confirmed to Politico that he participated in the briefing.

“In a secure room in the Capitol used for briefings involving classified information, administration officials broadly laid out the evidence U.S. spy agencies had collected, showing Russia’s role in cyber-intrusions in at least two states and in hacking the emails of the Democratic organizations and individuals,” the Post reported.

“And they made a case for a united, bipartisan front in response to what one official described as ‘the threat posed by unprecedented meddling by a foreign power in our election process.’”

But Republican leaders declined to join a bipartisan response to the information. Senate Majority Leader Mitch McConnell “raised doubts about the underlying intelligence and made clear to the administration that he would consider any effort by the White House to challenge the Russians publicly an act of partisan politics,” the Post reports.

Russia’s interference with the American elections fit the pattern of a country engaged in disinformation and destabilization efforts across the globe, as Johnson has described it. And Russia’s leader was someone Johnson already suspected of nefarious acts. Johnson had previously sponsored resolutions calling for a full investigation into the murder of a Russian political opposition leader and for an investigation of Russia’s attacks on the Ukraine.

Johnson, in short, had an opportunity to be a patriot and condemn the fact that Russia was now engaged in such activities in the United States. But he issued no resolutions — in fact, not one word — on Russian’s cyber attacks on America.

Worse, he has engaged in his own pattern of misinformation on the subject. After the CIA publicly released a report in January concluding that Russia meddled in the presidential election to help Republican presidential candidate Donald Trump win the election, Johnson issued a statement to the Wisconsin State Journal saying he would “would need more definitive information before drawing further conclusions.” Johnson did not reveal that he had been informed back in September this was happening.

Johnson went on to complain to CNBC that the CIA refused to brief him on Russian hacking, saying “I have not seen the evidence that it actually was Russia,” while failing to note the CIA report’s echoed the briefing he’d received from other intelligence leaders in September.

Johnson also complained that Obama had failed to confront the Russia government with strength, even though the Obama administration had proposed a strong stand on cyber hacking which Johnson declined to join.

So things stood until this week, when Johnson did an about face and declared his concern about Russia’s cyber hacking of his country. Why the sudden shift of position?

Perhaps because Trump’s election was certified last week so Russia’s efforts to help elect him can’t be used to pry away any electoral votes. Or perhaps because of the Senate hearing last Thursday, where senators on both sides of the aisle expressed concern about testimony by intelligence leaders on Russian hacking. As GOP Sen. Lindsay Graham noted, Republicans could be the next target of cyberattacks. “Could it be Republicans next election?” he said. “It’s not like we’re so much better at cybersecurity than Democrats.”

Indeed, all Americans are threatened when a hostile nation targets us for cyber attacks. That’s true now, and was true back in mid-September when Ron Johnson failed to take any action. Perhaps it’s time for him to explain why.