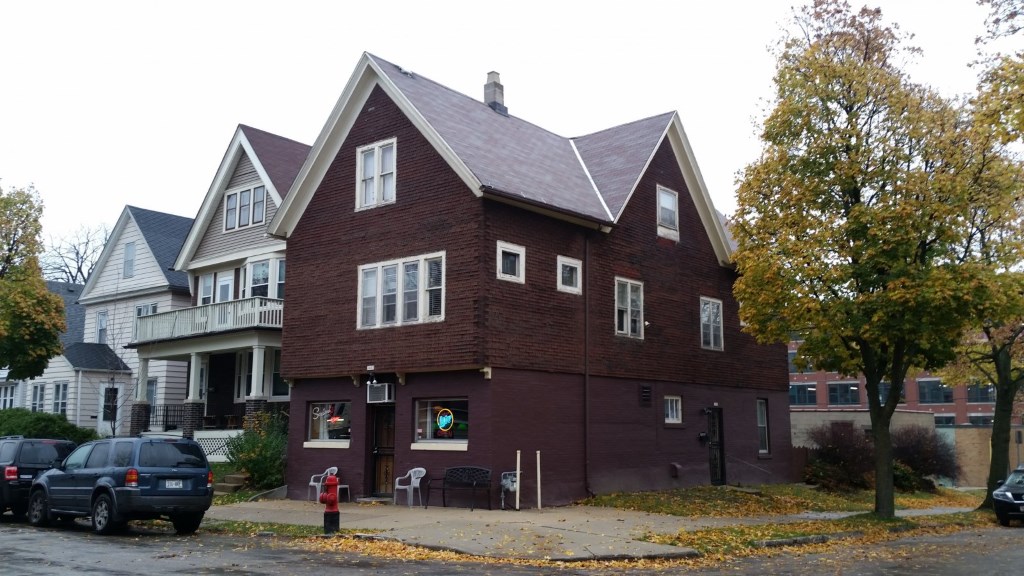 This has been a busy year for your Bar Examiner, who issued a verdict on 31 taverns in 2016. Happily, 30 of these bars remain in business for you to visit in 2017. One other bar, which is on our Top 10 list, had been closed for years by the time we reviewed it as a historical artifact.

As has been the custom here, most of the taverns reviewed have been operating for many years. Bar Exam has always taken a particular interest in pre-Prohibition taverns, and the licensed Soft Drink Parlors of the Prohibition era. Many of these old places were constructed over a century ago specifically as drinking spots, and remain so to this day, the effects of the Great Experiment notwithstanding.

They are scattered throughout the city, and have done much to provide the unique tavern culture of this city for decades.

Many of these old taverns are clustered in working class neighborhoods and commercial districts of places like Bay View, Brady Street and Riverwest, which have seen the majority of the reviews here. Few of these bars advertise or promote themselves, and it is likely that a number of their operators are not familiar with the internet and social media, and may never read these words. But their story, as a tale of this city’s culture, is one worth sharing, no matter how modest the establishment.

How We Do It

Each Bar Exam begins with a visit to City Hall, followed by a site visit, by bicycle, just to make sure that the Bar Exam story does not end with a sentence in the County Jail.

Much like its cousin column, House Confidential, the Bar Exam relies on microfilm, microfiche and paper records held by the city as a starting point for the review. This trip is made to establish a historical record about the tavern and the building it occupies. Since taverns are licensed by the city, they are subject to scrutiny by the police and the Common Council. Many priceless nuggets can come from these old reports, especially names of long-dead operators. (Here’s to you, Bozo Latinovich!)

Some of these historic documents offer a window into tavern life of an earlier era. Many of the older taverns were surveyed by W.P.A. architects during the Great Depression, and exhaustive studies of these buildings in city files help to bring the past to life. Taverns, more so than most retail businesses, had a history of fire damage, and those reports can provide light, if not heat.

The reason to gather all of this old stuff is to provide a framework upon which to build a tavern review that can last even if the bar management doesn’t. Very often bar reviews have a brief shelf life since the reporter presents only a moment of a slice in time. Once the favorite bartender is gone, or the place changes hands, the review loses its value.

Accordingly, the Bar Exam also includes detail about the owner of the business, the owner of the building, the estimated rent, the legal capacity and other items from the public record, including the number of “amusement devices” and jukeboxes For fun, we throw in the date of birth of the Registered Agent. Showing up at a tavern on the owner’s birthday is often a good way to get yourself a free shot.

After the City Hall preliminaries, the next step is to actually visit the bar in question. This is usually done, unannounced, as soon to opening time as possible, when the bar is likely to be quiet, and with enough ambient light to sneak in some photographs without having a camera flash alarm patrons.

To the extent possible, the purpose of the visit is not announced to the staff during the visit. The only hint that a bar review might be forthcoming is that the author friends the bar on Facebook, when such an account exists.

The bar inspection process is a simple one. The reviewer arrives sober, orders one beer and a glass of water, pays, and then goes about his business counting the number of stools, the quantity and quality of the decor, the remodeling or lack thereof, and the general tenor of the place, all the while surreptitiously taking pictures of the place. Of particular interest in old bars are old bar urinals. Pool tables are always subject to scrutiny, and usually are put to the test. A crooked bar stick is a certain demerit. The hardest part of the site visit is to document the beers on tap, which can run into the dozens. The camera comes in handy for that.

With the beer and the water consumed, the bar examiner is soon on his way, often not to return for some months, if ever.

Interestingly, some of the most popular bars, as judged by the number of readers, are those that are among the least-known in the city. This just goes to show that there is a great interest in the history of tavern culture in Milwaukee, which the Bar Exam looks forward to continuing in 2017 and beyond.

One gratifying result of the Bar Exams in 2016 was found in the many comments that readers made to the stories, often recounting old times in the tavern, or a family connection from years past.

Thanks is due to Dylan Deprey and Jordan Garcia for their assistance in assembling the Verdicts for many of the Bar Exams. The kindness of the staffs at City Hall, The Milwaukee Public Library and the Milwaukee County Historical Society is deeply appreciated. 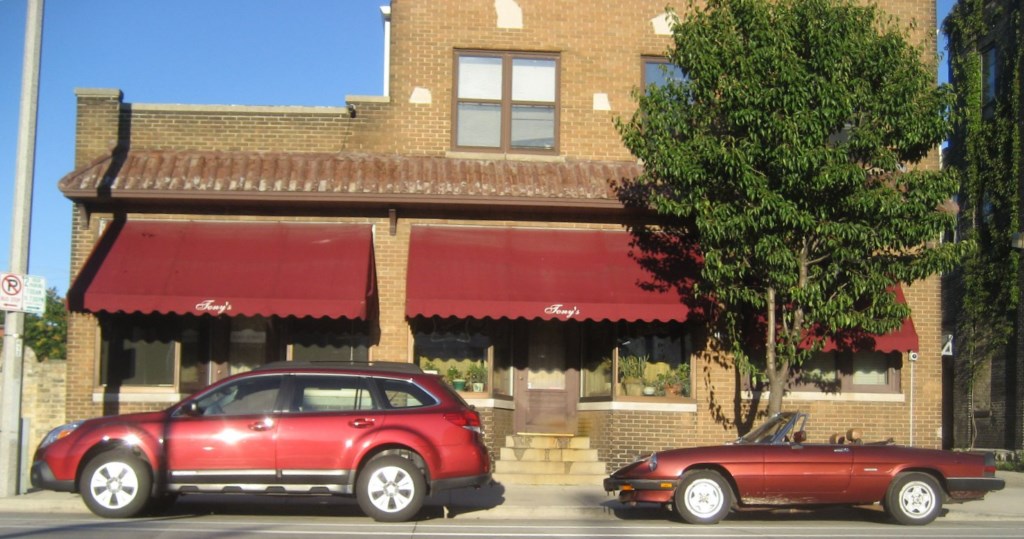 Tony’s Tavern is an outlier among bar reviews, since the establishment has been closed for years, and its namesake owner is no longer alive. However, this old place on S. 2nd St. remains virtually as it was on the last day it was open, with the bar intact, the liquor bottles still on the shelf, the furnishings in place, and the operator’s widow still in residence in the room in which she was born over 80 years ago. 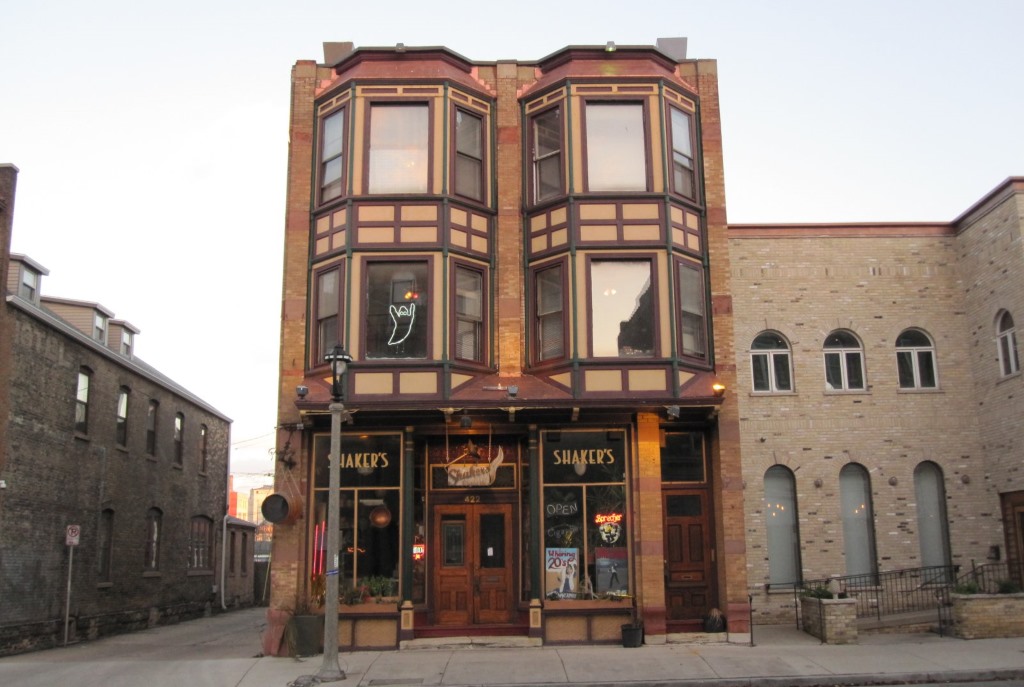 Four months after reviewing Tony’s, the Bar Exam headed down to Shaker’s Cigar Bar, which is located right next door in Walker’s Point. Shaker’s, too, is an outlier, as it is the only tavern in the city of Milwaukee to permit smoking of cigars due to a quirk in the state law that generally outlawed smoking in public places. Although it is located in an 1894 building, and has a period-appropriate interior of salvaged bar equipment, the location has only served as a bar for about 40 years, with 30 of them under the current management. That’s a newbie by Bar Exam standards.

8. Eastsider, Scene of the Crime? 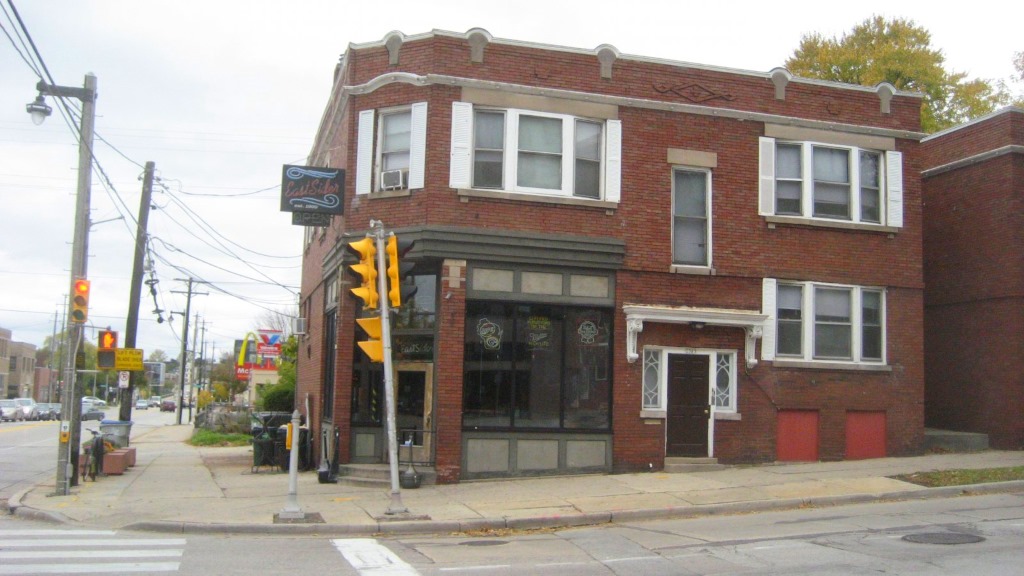 The Eastsider. Photo by Michael Horne.

A wee bit of notoriety propelled this tavern among the readers’ favorites for 2016. A venerable establishment at a major intersection, the Eastsider made news last fall when it was reported that a Milwaukee police officer, after shooting and killing a suspect, came to this place to drink and then allegedly sexually assaulted a fellow customer. The officer has been fired and charged with homicide, in addition to the charges in this case. A very odd and isolated event in an intimate tavern. Things happen. 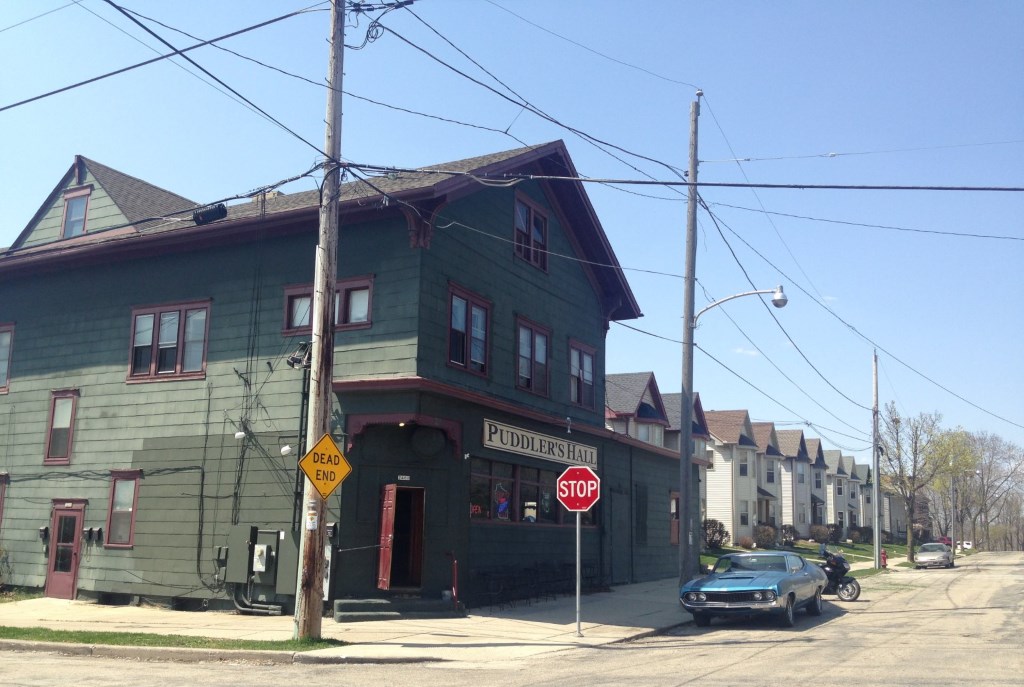 The history of Bay View is pretty much coterminous with the history of this old Union Hall and bar. The building is hung with historic photographs and has a floor plan that is good for wandering around. The bar has adapted to the 21st century with an active and discerning list of beers and specials. Neighborly, with a heavy dose of history.

6. The Bottle Is An Architectural Find 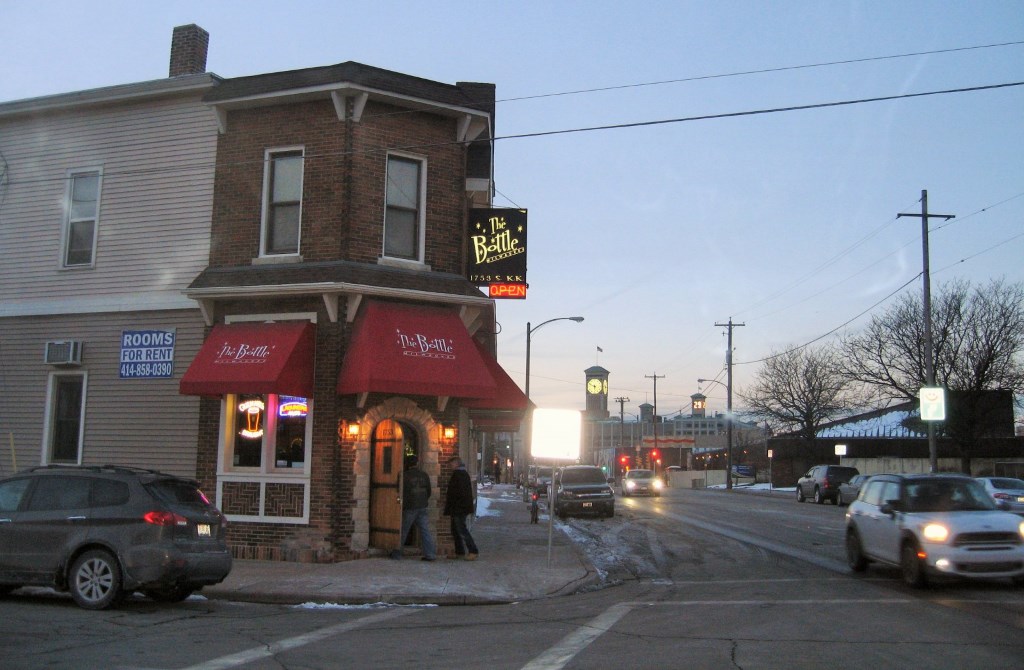 The Bottle. Photo by Michael Horne.

The Bottle is an old bar with a bowling alley, rooming house and fraternal organization history. Although the bowling lanes and the Odd Fellows are gone, there are still furnished sleeping rooms to let upstairs of this working class palace at the southern gateway to Walker’s Point.

5. Woody’s Is a Ramshackle Gay Bar 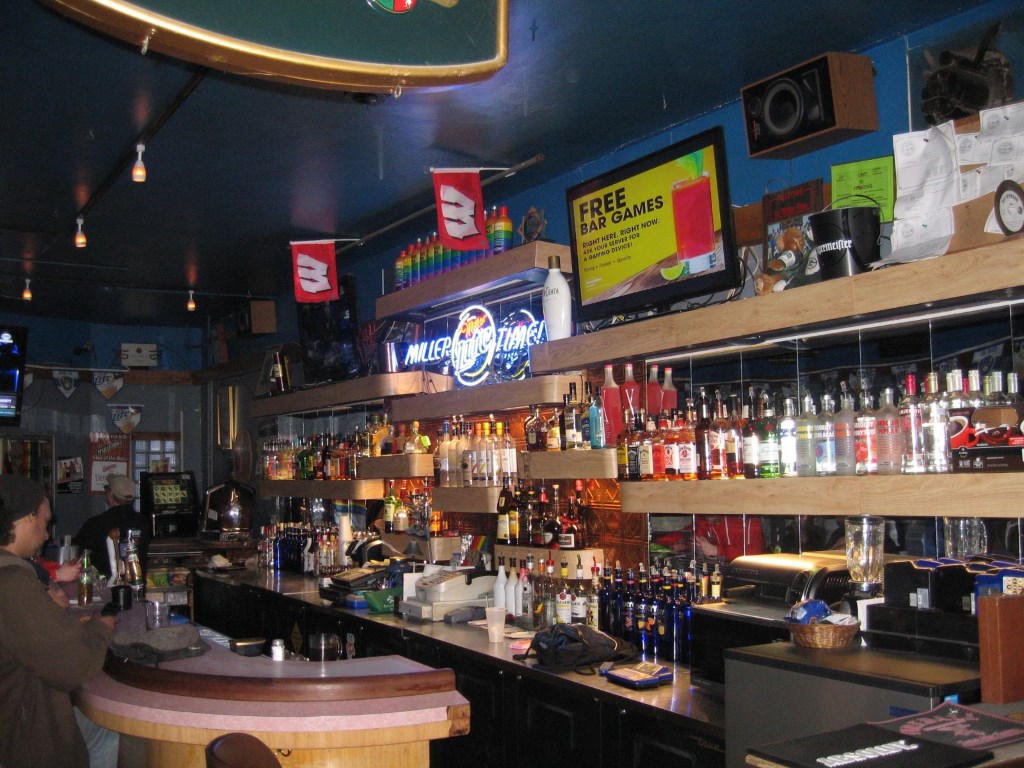 Gay bars have always been popular with Bar Exam readers, and a concerted effort was begun some years ago to document as many of these places as possible before they disappeared from the scene. Woody’s was one of the gay bars visited in 2016, and its lively and varied history included a number of surprises, like a tunnel and a connection with a Prohibition whiskey ring. Its service as The Balkan Inn, later as Lupe’s and for the past two decades as a gay bar is a testimony to the cultural shifts that an 1880 building has seen from its spot on the South Side.

4. Klinger’s East Is a Time Warp 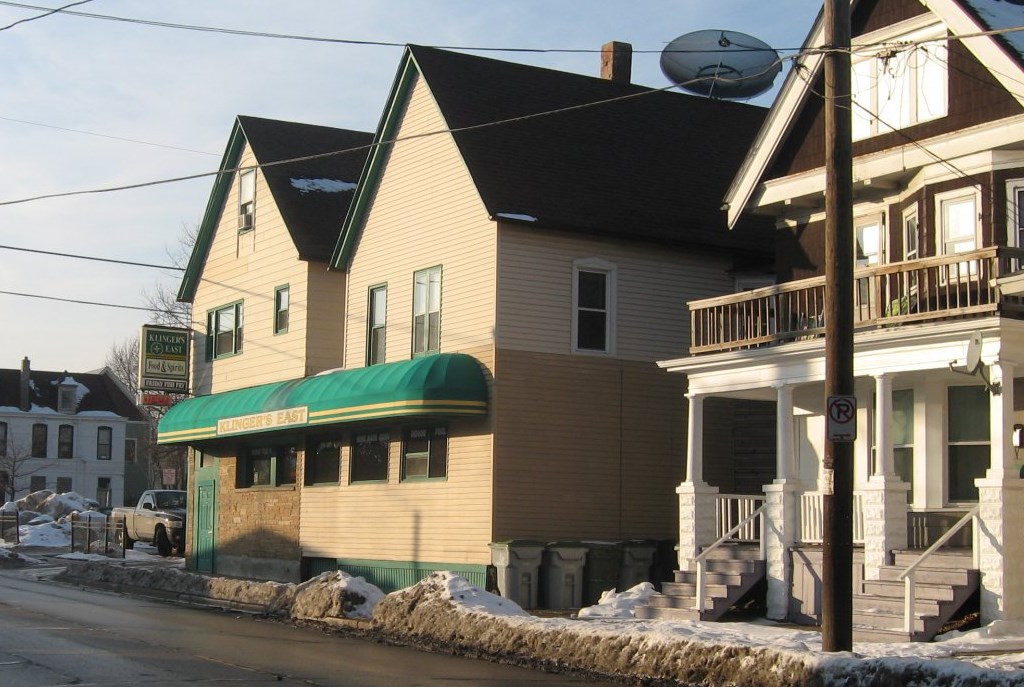 Readers were also drawn to this Riverwest bar that has been in the same hands for decades. Klinger’s has retained its pre-hipster vibe, and unlike many neighborhood joints, the folks here tend to have jobs, and union ones at that. The review looks into the history of Milwaukee tavern sports leagues, and the phenomenon of eating home-cooked meals in a saloon — with the kids in tow. True Milwaukee culture here.

Just as with House Confidential, Bar Exam readers are fascinated by the obscure gems of this city. The tiny Squirrel Cage is hidden in plain sight just a block away from a major intersection, yet is in a world removed. This is a small place that has been able to exist for decades almost entirely on the patronage of folks who walk not much further than around the corner (or down the stairs) to get there. It has a nice pool table, with an often essential shorty stick.

Bar Exam ignored its usual strictures against reviewing newly opened taverns in this instance. For one thing, the location had a long history as a tavern, including a lengthy spell as a lesbian and gay bar. (In those days the only action in Walkers Point was people driving through or cruising by.)

A brief respite as a fancy restaurant did little to draw business to the greatly remodeled tavern which opened in February with a strong marketing campaign emphasizing its Wisconsin identity. Never before had a Milwaukee bar so self-consciously express itself as a Milwaukee bar. A metaphysical experience.

The most popular bar of 2016 is a saloon, dance hall and bowling alley that just happens to be owned by, and named for, a Polish fraternal society. Now, that’s true Milwaukee, and it is easy to see why the Falcon Bowl captured the fancy of the readers.