Plan would build addition atop historic building, but will preservation advocates block it? 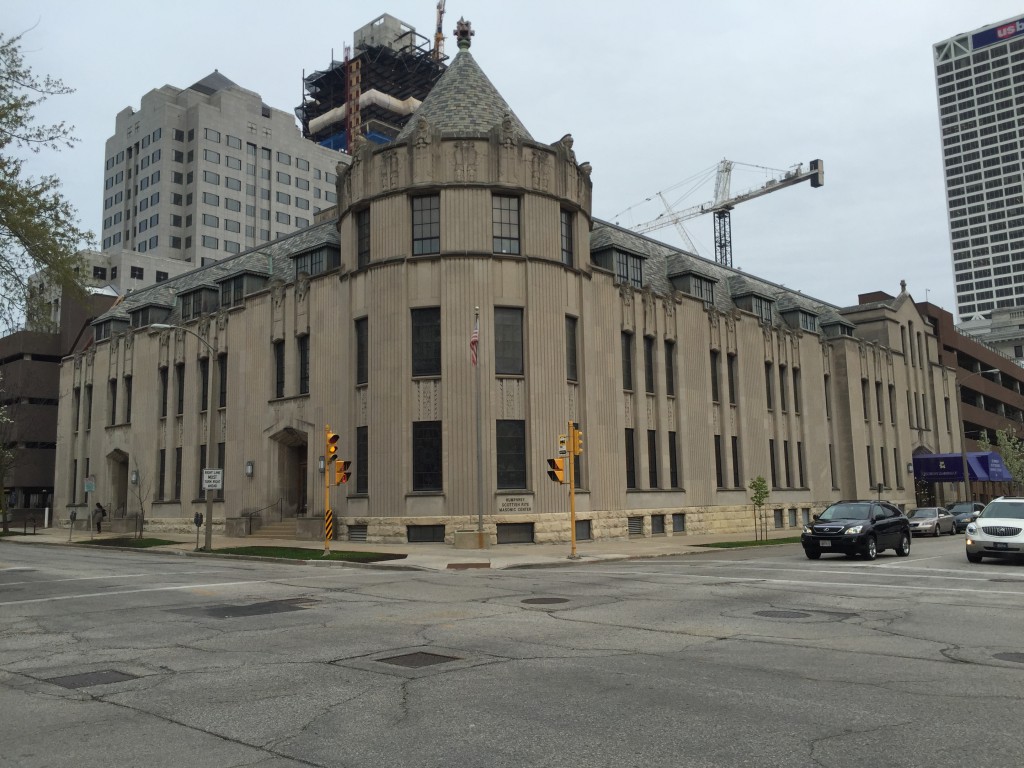 Get ready for a political fight.

The Humphrey Scottish Rite Masonic Center, built in 1889, could become a hotel with additional floors under a plan by Ascendant Holdings, but not before the historic preservation community has a chance to weigh in. The city’s Historic Preservation Commission approved a nomination yesterday to historically designate the building at 790 N. Van Buren St. That designation will force any future changes to the building to be subject to Historic Preservation Commission approval, but also allows for the Common Council to override the decision. Similar to the controversial 2010 process that created the Milwaukee Marriott Downtown hotel, this project seems headed for some legal wrangling.

Bruce Block, an attorney with Reinhart Boener Van Deuren representing the building’s owner, noted the building owners weren’t at the hearing to “discuss the merits of this listing, but what we would like to talk about is holding off for the time being.” Block noted that the building is a “difficult building to reuse” with “a lot of spaces inside that would be very difficult to re-adapt for a commercial use, either as offices or residential.” The powerful real estate attorney noted that Ascendant’s proposal could preserve much of the building, but they would like to be able “to do so with a little more liberty.”

Bob Hagerty is chairman of the trustees of the Scottish Rite Valley of Milwaukee, the local branch of the world-wide fraternal organization of Freemasons, which has been in charge of the building.  At its peak in the 1960’s, he notes, the group had 8,000 members in the Valley of Milwaukee, but today has “just under 700 members, of which less than 100 are active,” with the average member being 73 years old. According to Hagerty, the building today is “far beyond our financial ability” to maintain and the building’s maintenance costs continue to climb. The organization voted to sell the building in December in order to maintain the organization.

Eric Nordeen of Ascendant Holdings spoke of the his firm’s interest in completing an adaptive reuse of the building. He noted that the building today is “functionally obsolete” and short of another fraternal order moving in, has only one possible future use, as a hotel. The firm has recently signed a letter of interest to purchase the building, and will spend the next 90 days in a due diligence period. The building wouldn’t be the firm’s first purchase Downtown; they also purchased the nearby Wells Building in 2011.

Despite the request for delay by the building owners, the Historic Preservation Commission moved forward unanimously to approve what alderman and commission member Robert Bauman said was a “good faith application” for historic designation by Peter Zanghi of the Milwaukee Preservation Alliance. UW-Milwaukee professer and commission member Matt Jarosz said: “I’m trying to look for a reason that this is more complicated than it is. This is a great building.” Referencing the ultimately demolished Sydney HIH, Jarosz said “we’ve had a lot of buildings that we’ve struggled with [to find a reason for a historic designation]; this is not a hard one, this is really a great building and it’s done by great architects.”

The project will proceed down two paths simultaneously following the vote for designation by the Historic Preservation Commission. Nordeen and his team at Ascendant Holdings will continue to study their options on converting the building to a hotel. Nordeen didn’t really disagree with the commission’s vote, conceding that “it does meet a lot of the criteria” and adding that his firm “tends to agree” with the petition for designation. A statement that was transparent and honest, but probably an attorney’s nightmare. Block and the Scottish Rite will also almost certainly appeal the designation to the Common Council, which would first go to the council’s Zoning, Neighborhoods & Development Committee, which is chaired by Ald. Jim Bohl.

Block said he suspects a decision may ultimately need to be made outside of the purview of the Historic Preservation Commission, with the developer having to “get the density they need,” but that he “thinks the facades will be protected.” Dawn McCarthy, president of the Milwaukee Preservation Alliance, responded that “protecting only the facades would not, in my mind, be historic preservation.”

The Common Council has a much wider purview when it comes to designation. The commission is not chartered to make judgments on economic viability, but the council can. Expect that to be a big part of any argument to avoid designation.

Will this end in an acrimonious battle? It doesn’t look like it. The closing words at the hearing were commission chair Patti Keating Kahn telling the development team “it’s a great idea.” Commission member Blair Williams suggested that a well-designed plan for the building would probably be positively received by the Common Council. Nordeen needs to come up with a good looking rendering of his likely plan — a glassy, setback tower emerging from a preserved building — and he may get all the approvals he needs.

The building was originally built as the Plymouth Congregational Church in 1889, but designed in a way to emphasize its “social justice mission” and avoid a traditional church design. It was built in the Richardsonian Romanesque style by congregation member and prominent architect Edward Townsend Mix. According to the city’s historic designation study, those design decisions drew criticism from as far away as New York, Texas and Missouri. Mix, whose health was failing at the time of the building’s construction, would die in 1890.

By 1912 the church decamped for 2717 E. Hampshire St. near UW-Milwaukee, where it still resides today. The church turned to another prominent Milwaukee architect, Alexander C. Eschweiler, to design that recently rehabilitated building in a much more traditional style.

The Scottish Rite Masons, a branch of Freemasonry, bought the building from the Congregationalists in 1912 and built an addition to the south of the building shortly thereafter. At that point in time it was renamed the Wisconsin Consistory Building. In 1936 another prominent Milwaukee architect, consistory member Herbert Tullgren, completed an addition to the building. Tullgren also guided a substantial rehabilitation of the building which included erasing much of the Richardsonian Romanesque features in favor of a more Art Deco design. The brick facade was covered with Bedford Limestone, the arched windows were made rectangular and a horizontal design came to sport a more vertical orientation.

According to the recently completed study, “particular attention was paid by the press at the time of construction to the striking life-sized stylized figures on the exterior… Nineteen windows show leaded art glass depicting everything from masonic symbols to individuals important to masonry such as George Washington.”

In 1994 ownership of the Wisconsin Consistory Building was transferred to the group’s charitable and educational foundation, the Wisconsin Scottish Rite Foundation, Inc. This coincided with the rebranding of the building as Humphrey Scottish Rite Masonic Center. This changeover and $5 million update facilitated opening the building for public events, including weddings, and was intended as a financially prudent way to support the upkeep of the facility.

The site has been listed on the National Register of Historic Places since 1994. Locally it’s been up for designation twice before, once in 1986 when it was denied, and another time in 1992 when a two-year agreement was put in place to avoid any demolition.

5 thoughts on “Eyes on Milwaukee: Masonic Lodge Could Become Hotel”