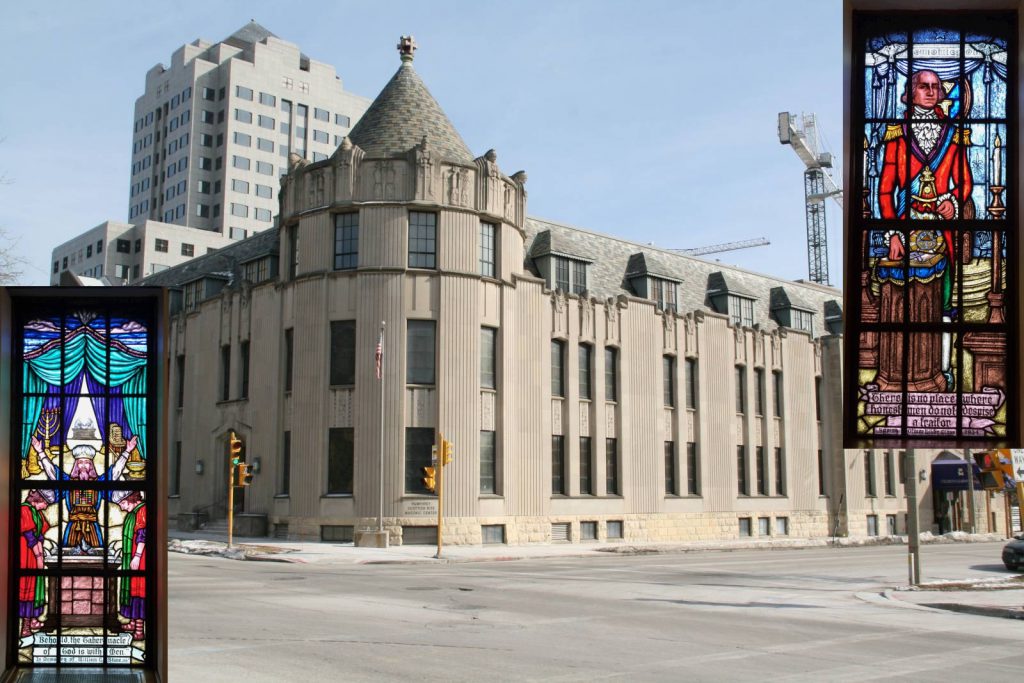 No one seems to believe they are of high quality or essential to the building’s historic integrity, but the city’s historic preservation ordinance calls for their preservation in some form. Unfortunately, few seem to want to take them.

A 2017 plan to turn the historically-protected, three-story building into a hotel, with a 14-story addition, was approved with the caveat that three of the stained glass windows remain in place and the other 17 be displayed in the hotel’s common areas. That plan never advanced to construction, but Ascendant Holdings acquired the property, 790 N. Van Buren St., for $3.5 million.

The firm is now proposing, with a new, unnamed majority partner from Chicago, to convert the building to 22 apartments (less the new tower), but first is seeking approval to remove all of the stained glass windows as a condition of making the building viable for redevelopment.

Many of the proposed apartments would have no unfiltered natural light as the windows are currently configured. Project architect Scott Ramlow said that’s a particular problem given how deep the building is and how dark the windows are.

“So in essence you would be building apartments that people couldn’t see out the window of,” said Historic Preservation Commission chair Alderman Robert Bauman when the proposal was considered on March 1st. The hotel plan would have used the lower floors for common spaces instead of residential units, avoiding the need for a large amount of natural light.

When Ascendant acquired the building, the masons took a number of their possessions with them. But not the windows.

“The local Wisconsin masons have expressed no interest in them,” said Ascendant’s Eric Nordeen. He said interest has come from out of state and others could potentially reuse them in a future building. “We can’t say we have a specific group that has made any formal commitment to take them.”

“They really are extremely esoteric,” said Historic Preservation Commission staffer Tim Askin as he showed commissioners photos of some of the windows. They include quotations, which reference the Bible, the Scottish Rite or historic Scottish authors, Askin said. “The quote under George Washington here, he didn’t say that, and as far as Google says, no one else did either,” Askin noted.

Nordeen said the requirement could hamper the marketability of the units. “They are rather thematic and churchlike,” he said.

Bauman said the fact that the units would be rented as apartments, not sold as condos, negated that concern. “If you don’t like George Washington standing there every morning when you get your coffee, move,” said the alderman, while laughing. “Don’t you think having a George Washington stained glass window in your unit would be one hell of a novelty?”

Ascendant could appeal the commission’s decision to the full Common Council if it chooses.

The commission did grant a much more straightforward request. Brick-covered window openings on the east side of the building, which faces the Northwestern Mutual parking structure, would be restored to translucent, metal-framed windows.

The building was originally built as the Plymouth Congregational Church in 1889. It was built in the Richardsonian Romanesque style by congregation member and prominent architect Edward Townsend Mix.

Nordeen said he still wishes the hotel redevelopment could have been completed by Ascendant. “It is very disappointing personally for me not to move forward with that project and the market has dictated that,” he said. “I’m excited about the opportunity to [develop the apartments], but it does come at a pretty significant financial loss for me personally and our partners.”

One thought on “Eyes on Milwaukee: Masonic Apartments Move Forward, But…”