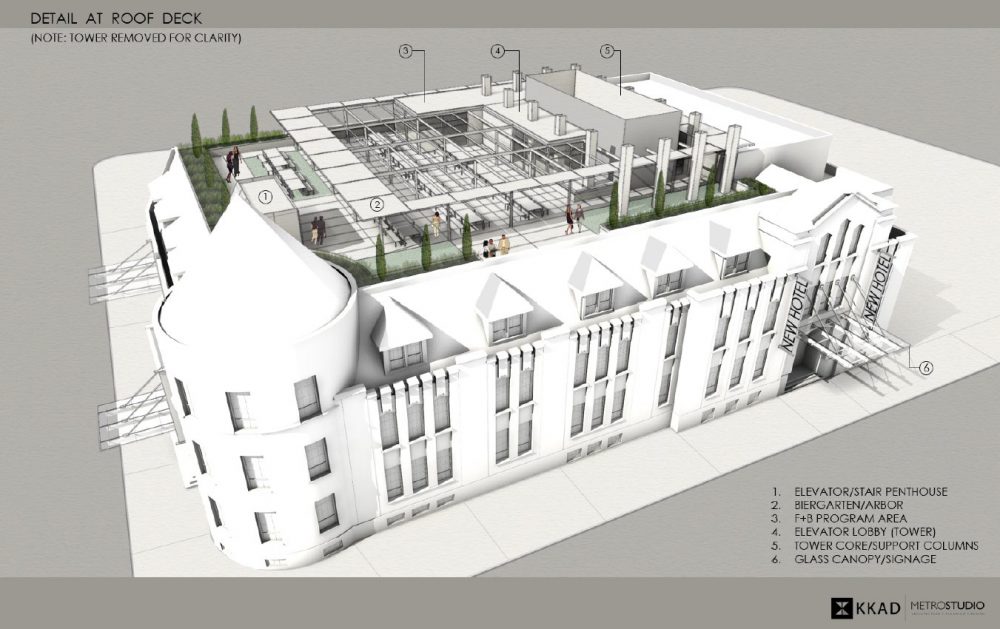 Roof Deck at the Masonic Center

Additional design details on the proposed hotel for the Humphrey Scottish Rite Masonic Center have become available as the project begins making its way through a potentially lengthy city approval process. Under a proposal by developer Ascendant Holdings, the firm would acquire the historic building at 790 N. Van Buren St. and add a 14-floor, 220-room tower to the southeast corner of the building.

Last week we shared a rendering of the building, which showed the original facade being virtually untouched and a glassy tower being erected as a distinct building. Additional drawings now show the rooftop “biergarten,” a space that is sure to draw substantial public interest. The proposed beer garden comes as part of a trend of hotels including rooftop bars. The Kimpton Journeyman Hotel in the Historic Third Ward frequently drew capacity crowds this summer following its June opening. The rooftop bar at Hotel Metro also draws large crowds when it’s open to the public.

The hotel would be managed by Portland-based boutique operator Provenance Hotels. Design of the hotel is being led by a partnership of New Jersey-based Kraig Kalashian Architecture & Design and New Orleans-based Metro Studio.

The bulk of the current building would be converted to the hotel’s common areas, including a lobby, restaurant, ballrooms and meeting spaces. The 350-seat theater in the building today would be preserved. Plans also call for preserving a substantial amount of the historic interior elements of the building. Ascendant’s Eric Nordeen told Urban Milwaukee in early January “the good news is that HPC staff has been really great to work with and very thoughtful in their approach,” but added that Ascendant is “pushing as much as we can to keep it moving.”

The project should be scheduled for a hearing before the Historic Preservation Commission on the issuance of a Certificate of Appropriateness in the coming months. The commission’s next scheduled meeting is on February 13th. It will also head to the Common Council’s Zoning, Neighborhoods & Development Committee before meeting the full council. The council has the ability to override the decision of the Historic Preservation Commission, and has done so in the past, including a 2010 decision on the Milwaukee Marriott Downtown hotel.

The building was originally built as the Plymouth Congregational Church in 1889, but designed in a way to emphasize its “social justice mission” and avoid a traditional church design. It was built in the Richardsonian Romanesque style by congregation member and prominent architect Edward Townsend Mix. According to city’s historic designation study report, those design decisions drew criticism from as far away as New York, Texas and Missouri. Mix, whose health was failing at the time of the building’s construction, would die in 1890.

By 1912 the church decamped for 2717 E. Hampshire St. near UW-Milwaukee, where it still resides today. The Scottish Rite Masons, a branch of Freemasonry, bought the building from the Congregationalists and then built an addition to the south of the building. It was soon renamed the Wisconsin Consistory Building. In 1936 another prominent Milwaukee architect, consistory member Herbert Tullgren, completed another addition to the building. Tullgren also guided a substantial rehabilitation of the building which included erasing many of the Richardsonian Romanesque features in favor of a more Art Deco design. The brick facade was covered with Bedford Limestone, the arched windows were made recantagular and a horizontal design came to sport a more vertical orientation.

According to the 2016 study of the building “particular attention was paid by the press at the time of construction to the striking life-sized stylized figures on the exterior… Nineteen windows show leaded art glass depicting everything from masonic symbols to individuals important to masonry such as George Washington.”

In 1994 ownership of the Wisconsin Consistory Building was transferred to the group’s charitable and educational foundation, the Wisconsin Scottish Rite Foundation, Inc. This coincided with the building’s rebranding as the Humphrey Scottish Rite Masonic Center. This changeover and a $5 million update made the building more attractive for public events, including weddings, and was intended as a financially prudent way to support the facility’s upkeep.

The site has been listed on the National Register of Historic Places since 1994. Locally it’s been up for designation twice before, once in 1986 when it was denied, and another time in 1992 when a two-year agreement was put in place to avoid any demolition.

The city’s Historic Preservation Commission approved a historic designation for the building in May 2016 following a petition by Peter Zanghi of the Milwaukee Preservation Alliance that area alderman and commission member Robert Bauman said was made “in good faith.” That designation, which has been held in the city’s Zoning, Neighborhoods & Development Committee since May 17th, would limit the developer’s ability to make changes to the building. The desire by Ascendant to have the hotel approved before the historic designation leaves this prior decision in an awkward position.

Bob Hagerty, chairman of the trustees of the Scottish Rite Valley of Milwaukee, the local branch of the world-wide fraternal organization of Freemasons, told the Historic Preservation Commission in May that his group is in no position to operate the building long term. At the group’s peak in the 1960s, it had 8,000 members, but today has “just under 700 members, of which less than 100 are active,” he noted, and the average member is 73 years old. The building is “far beyond our financial ability” to maintain and its maintenance costs continue to climb, Hagerty added. The organization voted to sell the building in December 2015. Ascendant has a purchase option on the property.

3 thoughts on “Eyes on Milwaukee: More Views of Masonic Hotel”