The anti-streetcar folks shot themselves in the foot once again in their quixotic attempt to assure Milwaukee remains the densest city without a rail system. Ald. Joe Davis hastily scheduled a Monday news conference to “discuss reports that $54.9 million in federal money that makes up the funding base for a proposed downtown streetcar could be used for a bus rapid transit system,” as he put it.

“The public may have been misled by city leaders who claimed this money absolutely had to be used for a streetcar,” Alderman Davis declared. “The Common Council should have a chance to weigh all relevant proposals for this funding to decide which will provide the most benefit to city residents.”

Reports? What reports? According to Davis, the “report” was an article in the Daily Reporter claiming “that federal funds could be reallocated to build a bus rapid transit (BRT) system. BRTs utilize rubber-tire buses and exclusive high-occupancy vehicle lanes to quickly move passengers between destinations.”

But, less than hour before the scheduled 2:30 p.m. press conference, it was canceled by its organizer.

Why? “In light of a need to verify critical information that appeared in the recent Daily Reporter article,” Davis wrote.

That’s a dignified way of saying “because the story got the facts wrong, and I don’t know what I am talking about.”

Matt Taub, the author of the Daily Reporter article wrote, “some proponents of the proposed Milwaukee streetcar have argued that the $54.9 million the federal government has offered for the project can go to no other purpose. But a closer review of federal requirements, detractors say, reveals that a bus rapid transit system is within the realm of possible uses.” Wrong.

Taub’s article is correct in saying this: “According to a 2011 letter from the U.S. Department of Transportation’s Federal Transit Administration, the federal money allocated to Milwaukee is exclusively for a ‘Downtown Connector Streetcar’ and cannot be used for a different transit project or other city needs.” But he then goes on to say that unnamed “federal officials reached for this story… used different language,” saying that “If a bus rapid transit system traveled through downtown along a ‘fixed guideway’ that prohibits other sorts of vehicles from sharing the same route, federal officials could consider the proposal.”

Davis seized on this language from an unnamed source to call his press conference, which he then cancelled, presumably after Taub let him know the story was incorrect. (Taub tells Urban Milwaukee the Daily Reporter intends to run a correction.)

Prior to the cancellation of Davis’ press conference, Mayor Tom Barrett was asked for a comment on the Davis/Taub theory and his office responded with the release of two critical documents. One was the 2011 letter quoted in the Daily Reporter article that, indeed made it explicitly clear that the funds must be allocated to a fixed-rail project, that the Secretary of Transportation has no power to alter the terms of the appropriation, and that any change would require an amendment to the bill.

The mayor also released a 2009 congressional document that codified the appropriation. The budget document [p. 2041] specifically states that “the disposition of these funds has been proposed allotting forty per-cent of the funds for Milwaukee County to purchase energy efficient buses and sixty percent for the downtown Milwaukee fixed rail circulator.”

Notice the words, “fixed rail.” There is no mention of a “fixed guideway” in this document. As far as the bus money, that has been long ago spent by Milwaukee County.

In February, Steve Miner was named Assessment Commissioner for the City of Milwaukee. He replaces Mary Reavey, who retired. Miner had served as the chief assessor for the City of Milwaukee since January 2014 until winning this promotion. Previously he served as the City Assessor in Wauwatosa from August 2007 to January 2014. Before that he was the assessor in Cudahy from 1992 – 2007. As a consultant he has reassessed and defended his reassessments of communities like Bayside. Miner got his start as a manager of an athletic footwear store (just like Sen. Chris Larson) before finding himself in the assessment business. Professionally, the Eagle Scout is on the board of directors of Habitat for Humanity and the Southshore credit union.

He is also the webmaster and former president of the Wisconsin Association of Assessment Officers. This is yet another professional organization that was blindsided by budget changes offered by Gov. Scott Walker, who proposes to completely restructure the assessment practices of the state by requiring, for example, Milwaukee County to assess most properties outside of Milwaukee City and its largest suburbs. The county, however, does not have an assessment office.

It has been suggested by this writer that perhaps the City Assessor could undertake the assessment functions as a contractor for the county.

Richard Pfaff is the new Deputy City Clerk for the City of Milwaukee. The department veteran replaces Rebecca Grill, who left in November to become Administrator of the City of West Allis. City Clerk Jim Owczarski, who is appointed to his job for a four year term by the Common Council members, selected Pfaff as his deputy. Owczarski makes $92,376 in his job, while his new number two will be paid $89,479. The office coordinates the activities of the Common Council, including information, tavern licensing, record keeping and other responsibilities. Grill, as administrator, will serve as the Chief Operating Officer of West Allis. She was recommended for the position last October by Mayor Dan Devine, who walked in Milwaukee’s St. Patrick’s Day Parade Saturday.

A reception at the Potawatomi Hotel welcomed Peter J. Holbrook, PhD. as the new Executive Director of the Cream City Foundation Wednesday, March 11th. The foundation focuses on Gay and Lesbian issues in the area. Dan Sawall, Chair of the board, said the group expected about 150 reservations for the event, but “we got 260,” he noted with pleasure. He also introduced outgoing Chair Jim Schleif. Among those in attendance were Bill Zaferos, Raquel Filmanowicz, Martin “Boris” Hintz, Pam “Doris” Percy, Paul Mathews, Michael Johnston, Mary Nelson, Terry Coffman, House Confidential Honoree Will Radler, Matthew Neu and others too numerous to mention including Dr. Robert Starshak.

Daniel Petry, now with the UWM Peck School of the Arts, presenter of the local LGBT film festival, posed for a photo with Raejean Kanter. Holbrook was dressed with a checkered pocket square in his suitcoat, along with a colorful striped tie. His name tag was adorned with an orange ribbon that announced him as a “Participating Sponsor” of the soiree. He posed for photos with Jen Murray. Tom Hoffman was there as were Chuck Kahn and Patti Keating Kahn. The couple are the landlords of the foundation which, like Urban Milwaukee, is located in the historic Colby-Abbot building. Raina Johnson was there with a winning smile, while Tonya Mantilla reacted with glee on learning she had a winning raffle ticket. 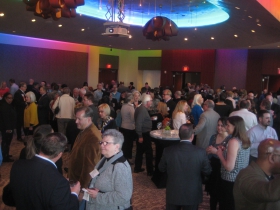 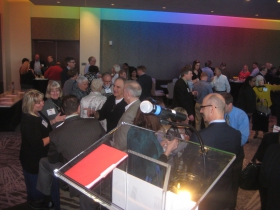 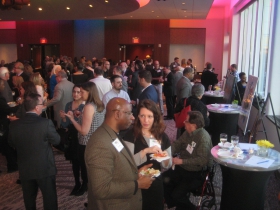 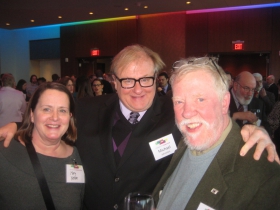 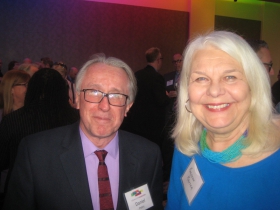 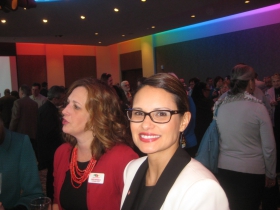 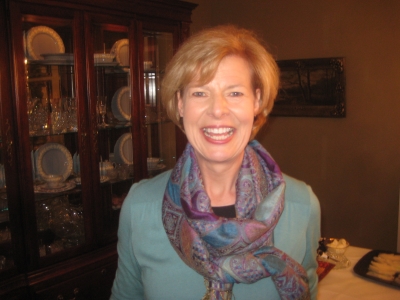 Even though she won’t have to face the voters for another three years, Tammy Baldwin is keeping up with her fundraising duties. Sunday afternoon, March 15th, she appeared at a welcome reception at the residence of real estate agent Jack Smith on the Lower East Side, where a group of well-wishers showed their support. Among the attendees was Chris Ahmuty, Dave Sartori (former State Treasurer Candidate), Julilly Kohler, and others who were invited to donate $53 for the senator’s 53rd birthday. Smith, the host, said the real estate market is picking up around here. A home down the street from his sold within a week, he said. He was assisted by Enrique Torres and other friends as they served berries, cheese and other goodies, including wine and soft drinks.

Senator Baldwin expressed hope for bipartisan solutions to the nation’s problems, so she must know something about the inner workings of the United States Senate that has escaped the rest of us. By virtue of her position on the Senate Health, Education, Labor and Pensions, or HELP committee, she has taken some lumps in the press for what is said to be overprescription of pain pills by doctors at the Tomah Veteran’s Center, and her office’s tardy response to the questions that cost one staffer her job.

But Baldwin said mental health issues, especially those involving veterans remains a pressing concern. She cited alarming statistics on the problem of Veterans mental health, substance abuse and suicide issues. Having been a soldier may be more hazardous to one’s health than being on active duty in a combat zone when these factors are considered. 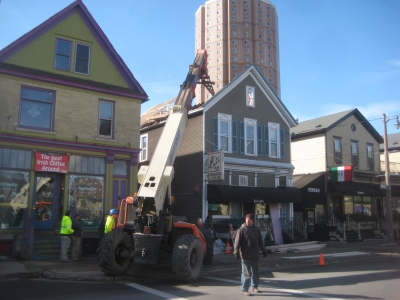 Raising the roof at Jo-Cat’s Pub. Photo by Michael Horne.

They really raised the roof at Jo-Cat’s Pub on Brady Street last week. Make that razed. Yes, the tavern is undergoing a considerable renovation. Dumpsters have been hauling away interior debris for over  a month. Last week it was time for the roof to be hauled away. Crews disassembled the old roof, right down to the rafters — removed them, too, for that matter. Within a day new trusses, sheathing and shingles were installed on the old place.

A block away, Brady Street has its own Bublr station. This one is painted grey, and is located along the south wall of St. Hedwig’s Church [1886], at the intersection of two bus lines.

And at the west end of the street, a huge pile of gravel has been deposited at the former site of the Habhegger auto repair building (Habhegger relocated to 102 W. Capitol Dr.), and the former Honeymead Warehouse, both of which have been demolished for a planned development. Wangard Partners, Inc. had hoped for a TIF district to redevelop the site, while the city contends that redevelopment of such a vital location on the river should not require city support. Nobody at this time (including the developer) seems to know what this project will look like. A planned commercial component, which shows in the original plans, is said to have been dropped, according to an individual who had considered the location for his business. Since then, there are reports that a commercial portion (which seems essential) is again being considered.