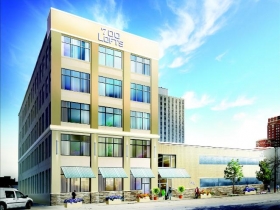 Two new apartment buildings have been proposed for the Downtown area, though not in spots you would expect. The northernmost of the two is proposed for 1300 N. 4th St. in the Haymarket neighborhood just north of the Park East corridor. The other proposal, 700 Lofts, is for 50 units at 700 W. Michigan St., in a pair of buildings most Milwaukeeans currently overlook (I admittedly couldn’t picture what was at the address when Bear bought the property a few months back). The two projects would be welcome additions, not just to bring more residents in the city, but to help eliminate some obvious dead zones.

Milwaukee’s Downtown has a handful of very active areas (Jefferson St. and Wells St., Milwaukee St. and Mason St., Juneau Ave. between Van Buren St. and Prospect Ave. to name a few), a number of areas that are a building or tenant away from being very active (i.e. Wells St. and Plankinton Ave. or W. Wisconsin Ave), and unfortunately a few dead zones. You can identify these by how easy it is to find on-street parking.

The two apartment proposals are definitely in dead zones. When was the last time you set foot in either of those areas? What are the odds if you were there over lunch hour that you’d encounter another pedestrian?

I give the developers credit for even proposing the projects. They’re undoubtedly difficult sites to develop. The Michigan St. proposal seems more likely to happen out of the two; it’s further along in the process and the developer, Bear Development, owns the property. The investment group has already signaled their intention to apply for affordable housing tax credits, while the developer on the 4th Street has yet to publicly commit to a financing option (all signs point to tax credits, though).

Will the two developments eliminate their respective dead zones by themselves? Likely not, but they’ll at the very least eliminate areas for critics to point to and claim that nothing is happening Downtown. One building at a time we’re getting a better core for Milwaukee.

It’s ba-a-ack.  Despite concerns from Ald. Bob Bauman and Ald. Nik Kovac, who represent parts of the impacted area, the Two Parks Neighborhood Improvement District, which has been championed by Gary Grunau, is coming back to the Common Council.  The creation of the NID would create a new tax on both residential and commercial properties in East Town to fund improvements and maintenance for Cathedral Square Park and Juneau Park.

In October, the file to create the NID was put on hold by the Community and Economic Development Committee to allow Milwaukee County to provide written support for the plan.  At the time it was thought the plan would be brought up at a special meeting of the CED committee in short order. It wasn’t.

Grunau had indicated at various meetings that getting the NID approved before the city budget was finalized was key to the effort moving forward and that any delays could lead to the effort being dropped. Apparently not. It will once again be before CED on Monday, December 10th, at 9am.

As a side note, at the beginning of the previous CED meeting regarding this file Bauman raised concerns that there was a lack of notice for such a significant policy change.  In response it seems the City Clerk’s Office is going the extra mile this time.  Some 50 people, including yours truly, received a hearing notice directly from Staff Assistant Chris Lee for this one. – Dave Reid 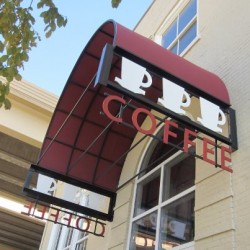 Stone Creek Coffee Roasters will be holding a grand opening event on Saturday December 1st, from 7am to 7pm to show off their new Stone Creek Coffee Factory Cafe and Kitchen.  Located at 422 N. 5th Street, the Factory is just steps from the Intermodal Station and Downtown.  During the grand opening event there will be free espresso drinks in the morning, tours of the kitchen and roasting facility, and to wrap up the night from 6 to 7 pm,  live music and munchies.

The project design work was done by Mark Lefebvre of The Kubala Washatko Architects, Inc.  Lefebvre has been involved in multiple area projects from Alterra’s Riverwest location to the Milwaukee Public Market.  The building’s new awning and signage were fabricated and installed by Ryan Foat, Oxbow Studio. Foat is also responsible for fabricating Alterra’s bike corral on Prospect Ave. and the custom bike racks at the Clock Shadow building. 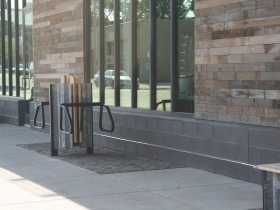 In addition to Stone Creek’s new opening, Tom Daykin recently reported that Anodyne Coffee Roasting Co. plans to move their roasting operations from Bay View to a new Walker’s Point location.  The new facility will house the roasting operations as well as a new a cafe.  More on this in the future. – Dave Reid

One thought on “Eyes on Milwaukee: The Dead Zones”