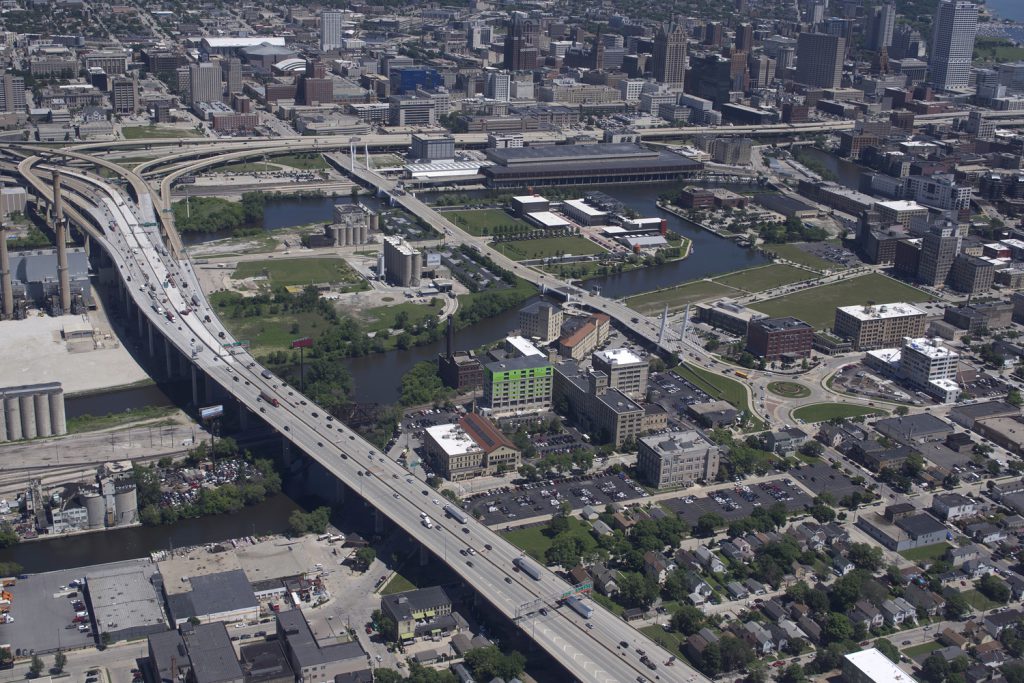 The Tannery in 2018. Photo courtesy of Founders 3.

Two historic buildings in The Tannery complex are being renovated in an effort to lure new tenants.

Much of the former Pfister & Vogel complex was first converted to office space in the 1990s by Peter Moede and changed hands twice before being acquired in 2018 by Chicago-based R2 Companies for $25 million.

R2, led by Matt Garrison, is now redeveloping two of the largest buildings in the Walker’s Point complex. The plans were finalized in 2019, but put on hold in 2020 after initial demolition work because of the pandemic.

Now the company is again moving forward on the project. It involves a “full-scale” renovation of the Timbers and Atlas buildings.

Get a daily rundown of the top stories on Urban Milwaukee
The Timbers Building, 700 W. Virginia St., is a six-story, Cream City brick building. Built in 1891, it contains 122,000 square feet of space according to a listing brochure from Founders 3. A variety of tenants occupy space within the building.

The Atlas Building, 600 W. Virginia St., is a seven-story, warehouse-style office building. Originally completed in 1913, it contains 67,760 square feet of space according to a listing brochure. Built for the tannery, it was later known as the Atlas Industrial Center. The brochure touts a fitness center, locker rooms, bike room, tenant lounge, kitchen, cafe and conference facility, many of which are part of the renovation project.

“It’s exciting to see this project come to life, along with an uptick in leasing activity in the Milwaukee market. The addition of a state-of-the-art tenant amenity package completes the R2 vision for The Tannery as an innovation hub in Milwaukee,” said Jason Trailov, a principal at R2, in a statement.

On-site surface parking is included in any lease at a rate of three spaces per 1,000 square feet leased.

Founders 3 brokers Ned Purtell and Jenna Maguire are the listing agents on the property. The Kubala Washatko Architects is leading the design work on the renovation.

Other office buildings at the complex include The Trade Center on the south side of W. Virginia St. and The Bottling House, anchored by Advocate Aurora Health. The bottling house is a leftover from the complex’s pre-tannery days when it was Pabst Brewing Company‘s southside brewery.

R2 has also sold off at least one piece of the complex. Braden and Brianna Just are redeveloping the former Schlitz tied house and attached row house at 605-609 W. Virginia St. into four apartments and commercial space. A limited liability company affiliated with the couple acquired the property from R2 for $500,000 in February.

Much of The Tannery complex’s northern half, now accessed by W. Freshwater Way and separated by Canadian Pacific railroad tracks, was redeveloped in phases into apartments known as River Place Lofts by Peter Moede and his firm Atlas Development. A new building, the final phase, is under construction on the site of the former complex power plant.

LCM Funds, one of the former owners of the office complex, converted a former tannery building used as a warehouse into an apartment building, The Granary Lofts, in 2019. It is located between the Timbers and Bottling House buildings. 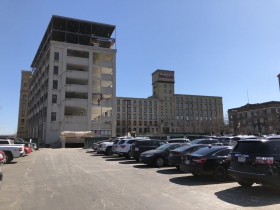 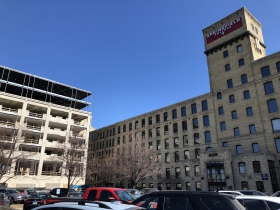 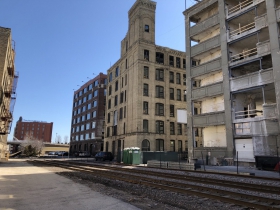 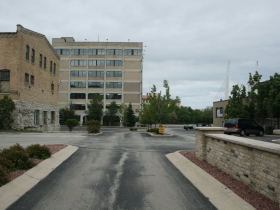 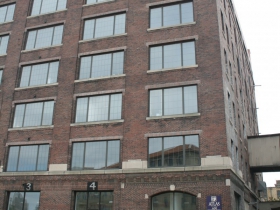 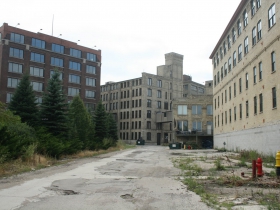 The Community Takes Shape Within the Corridor

A former Briggs & Stratton factory campus will soon see new life as a home for more than 200 people.

Much of the six-building complex, the oldest of which dates back to 1906, has been vacant since the 1980s, according to a city report. But not for long.

The Edison Will Add Restaurant, Commercial Space to Riverwalk

The board of the Redevelopment Authority of the City of Milwaukee (RACM) unanimously approved a partial lease of the authority-owned parcel at 1027 N. Edison St. The grass-covered site serves as the eastern landing of the Highland Avenue pedestrian bridge.

The 194-unit The Edison would replace a one-story floral warehouse owned by Rojahn & Malaney Company. But in order to accommodate the riverwalk, publicly-owned parcels on each side would be modified.

The Clarke Square Neighborhood Initiative will relocate its offices to an Italianate house at 1636 W. National Ave.

The home was built with the profits from the very bricks it was constructed from. It was the personal residence of George Burnham, the brick manufacturer who with his brother pioneered the creation of bricks made from Menomonee Valley clay.

Burnham, along with his sons, built one of the largest brickworks in the world.

The newest addition to Milwaukee School of Engineering‘s campus is open, but former students may find something familiar about it.

The facility is the university’s first “living-learning community” with two classrooms and a series of meeting spaces on the first floor and space for 552 residents above. A ribbon cutting was held Friday morning and the first students will arrive in the coming weeks.

When the Common Council and Mayor Tom Barrett approved a subsidy in 2019 to develop the IKON Hotel at W. Fond du Lac Ave. and W. North Ave., everyone knew it was a challenging project.

In fact, a City Comptroller report called it a “significant risk” and said the city could end up owning the former Sears department store.

But developer Kalan Haywood reports progress was made and that the Haywood Group is committed to moving the project forward. “We still feel good about it,” said Haywood to the board of the Redevelopment Authority of the City of Milwaukee (RACM) on Thursday afternoon.

There’s a worn bungalow next to an empty lot on an otherwise crowded street on Milwaukee’s North Side. The house, with its peeling gray paint, has been vacant for about a decade. Its windows are broken. The roof is completely shot.

But on a hot summer day in early August, the house is bursting with activity. Inside, demolition crews are gutting the home to its bones.

Reginald Reed says when his crew is finished, a family that would usually be blocked from the housing market will move in, paying on a rent-to-own basis.

A real estate firm led by Milwaukee Bucks guard Pat Connaughton is substantially scaling up the size of a proposed apartment building.

Three Leaf Development is now seeking to build a six-story, 50-unit building on the 1700 block of N. Palmer St.  In 2020 it revealed plans to build a four-story building with 13 units on a smaller site at 1737 N. Palmer St., but the expanded project now includes a surface parking lot at 1751 N. Palmer St. according to plans filed with the Historic Preservation Commission.

The campaign to build a downtown dog park is now appealing directly to all the dog moms and dads for support.

A public fundraising campaign is underway to fund the park, which would be built on a vacant lot under Interstate 794.

With Viets Tower near completion, the Milwaukee School of Engineering is kicking off two new campus improvement projects.

“As an urban campus in the heart of downtown Milwaukee, the MSOE Board of Regents and I wanted to not only strengthen our identity and footprint in the city but also ensure our students had ample green space to enjoy,” said university president John Y. Walz in a statement. “The green space and Welcome Center will announce to visitors that they are on the campus of one of the nation’s top technical universities.”

A campus green is being created from the surface parking lot that runs between N. Milwaukee St. and N. Broadway. Located atop the former footprint of E. Highland Ave., the 1.13-acre pocket park will include 62 trees, a hammock grove, wi-fi and a fully accessible path. A wall for projecting movies or games is included in the plans, as is a monument sign. An archway will be constructed near the entrance to the green at N. Broadway and E. Highland Ave., across the street from the campus center at 1025 N. Broadway. A small parking lot will remain in the southwest corner of the site, with an accessway to the underground garage along N. Milwaukee St.

Known as Westown Green, the 83-unit complex opened to its first residents this week. The $29.1 million project includes 195 student bedrooms. Thirty-nine of the units are being offered at below-market rates. The development, which occupies the complex’s 1962 addition, is one of at least four projects at the former newspaper site.

The project, which mixes an affordable housing component targeted at nontraditional students with apartments set up like modern residence halls, is the first of its kind in Milwaukee.

The Department of City Development is soliciting proposals to redevelop a vacant lot on King Drive.

In 2017,  Que El-Amin and the company he co-owns, Scott Crawford Inc. was the lone respondent to a request for proposals (RFP) and secured approval to build a three-story, mixed-use building. The building would have included a medical office on the first floor and four apartments above. But in 2020 El-Amin and his tenant, podiatrist Dr. Mexton Deacon, ultimately found another home for the Milwaukee Advanced Foot and Ankle Clinic in a one-story building at 1626 W. Fond du Lac Ave.

A Home for Gay, Trans, Black and Non-Binary People

In the spring of 2020, Annia Leonard was on the verge of being evicted.

But Leonard’s friends stepped in to help, and that lead to the creation of the Brave Green Wave Trybe, a group that has purchased a home that will be centered around and owned by queer, trans, Black and non-binary people.

“We saw a need that wasn’t being addressed directly by any of the existing organizations focused on housing or the community groups that were focused on queer folx,” Leonard said.

The Trybe partnered with the 21st Street Community Cooperative, which aims to build a safe and encouraging community of co-ops by purchasing multiple houses within a small radius around the 1100 block of North 21st Street.

One thought on “Plats and Parcels: Two Tannery Office Buildings Being Renovated”