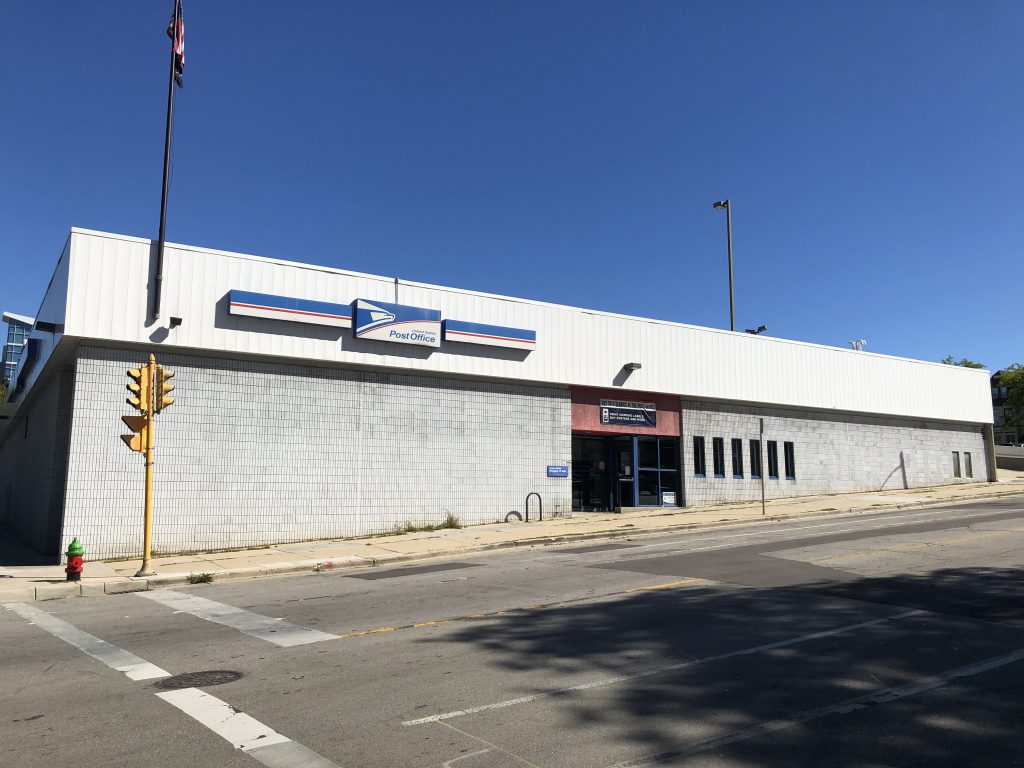 Illinois-based investors now own a key property on a busy downtown intersection, but what comes next is unclear.

On Tuesday, Mbogo Properties and an affiliate of Location Finders International jointly acquired the 38,193-square-foot, one-story building at 606 E. Juneau Ave. for $3.74 million.

The building is leased to the United States Postal Service, which operates its Juneau Station post office in the facility. USPS has a lease on the property through 2025.

“This is an opportunity to get what we think is a marquee asset with a lease term on it, and we’re going to play it by ear with what happens when the lease comes to term,” said Dan Rose, Location Finders’ director of retail development, in an interview with Sean Ryan.

The neighborhood around the post office is going to change while they wait.

New Land Enterprises is set to begin construction in the coming weeks on Nova, a nine-story, 231-unit apartment complex that will wrap the post office property. New Land is developing the building on an L-shaped site most recently occupied by a gym and Buca di Beppo restaurant. The upper floors of Nova will be set back from the shared lot lines with the post office property to allow sunlight in should a taller building replace Juneau Station.

The Marcus family owned the post office structure for decades and attempted to delay Nova’s approval.

“We are asking for just a little bit of time here for what could be a mutually beneficial development going forward decades,” said Marcus Corp. attorney Joshua Welsh in March to the City Plan Commission.

But New Land managing director Tim Gokhman said his firm had previously shared its plans with Marcus representatives and reached out other times. “We have been in contact with [Marcus] since August of last year,” he said. The commission, nor the Common Council, delayed the project.

Get a daily rundown of the top stories on Urban Milwaukee
The current post office facility is a one-story building with a rooftop parking deck. It’s built into the side of a hill that slopes upward to the east. Trucks enter and exit the building on its N. Jackson St. side, near a streetcar station that opened in 2018.

Juneau Station was constructed in 1973 to the designs of Rasche, Schroeder, Holt & Associates according to the Wisconsin Historical Society. The property is assessed for $2.4 million.

The other buildings at the intersection have a mishmash of styles owing to the post-World War II urban renewal program that leveled a traditional, urban neighborhood. Across N. Jackson St. to the west is the L’Hermitage condominium complex, three-story buildings set back from the street behind a fence. Across E. Juneau Ave. to the south is a multi-story commercial center anchored by the Metro Market grocery store. Kitty-corner from the post office is the Juneau Village Towers apartment complex, set back several dozen yards from the intersection.

A six-story apartment building will replace a vacant lot at the northeast corner of S. 5th St. and W. Mineral St.

New Land Enterprises is developing Element, a 66-unit, market-rate apartment building. It is scheduled to be completed by summer 2022.

General contractor Catalyst Construction completed the two-story concrete podium at the base of the building and now four, wood-framed floors are rising above.

The CDC extended its eviction moratorium another 60 days in counties with high or substantial transmission rates of COVID-19, giving vulnerable tenants a chance to avoid eviction and aid agencies more time to disburse millions of dollars in federal rental assistance.

All but 16 Wisconsin counties are covered under the moratorium extension, according to CDC data. COVID-19 infections have been increasing in Wisconsin as the highly transmissible delta variant of the virus spreads through the state and eviction filings in Wisconsin reached their highest point of the year in June, according to the Wisconsin Eviction Data Project.

“We have been working hard with our partners and with landlords to spread the word that rent assistance dollars are available and help is a simple call or click away,” Mike Bare, research and program coordinator at Milwaukee-based Community Advocates, says. “So at a time when COVID transmission rates are high, and tenants are still struggling to pay rent, extending the eviction moratorium was prudent.”

Real estate development firm Irgens could redevelop the former M&I Bank Building, now known as 770 North, into 231 apartments. A mix of market-rate and affordable housing, the building would include turning the former executive suite into a tenant lounge with a library, coworking space and bar area.

The firm first publicly discussed the plans at a Monday meeting of the Historic Preservation Commission. It marks a departure from the firm’s earlier plans to renovate the 20-story building as class A office space.

Built in 1968, the International Style building served as the headquarters for Marshall & Ilsley Bank before the bank was acquired in 2011 by BMO Harris Bank. In 2016 BMO announced that Irgens would build a new tower for the bank on the site of the former M&I parking structure. Irgens completed that building, the 25-story BMO Tower, in 2020. The two buildings are now attached at the base through a connector building.

Developer Anthony Kazee is pursuing the development of a new apartment building, Granville Commons, on the far northwest side of Milwaukee.

Kazee’s KG Development would partner with Impact Seven on the building, planned for a vacant lot at 7940 N. 66th St., just south of W. Bradley Rd.

“Our number one priority is to make sure the community and minority businesses are part of this development,” said Kazee at a July 1st meeting of the Granville Advisory Committee. The project would be located in the city’s Bradley Estates neighborhood.

The Mandel Group is moving forward on a 144-unit apartment building in Walker’s Point that will reshape the northern end of S. 5th St.

Catalyst Construction, with subcontractor HM Brandt, is demolishing a series of buildings between W. Bruce St. and W. Pierce St.

The structures being demolished include every building on the west side of the street, the former La Fuente building, 625-645 S. 5th St., the one-story warehouse at 607 S. 5th St. and the three-story apartment building at 603 S. 5th St.

In place of those buildings, Mandel is developing a six-story apartment building that will fill the half-block site. The market-rate apartment complex will include a fitness center with yoga, spin and fitness rooms, game room, dog wash room and rooftop deck and club room. Units layouts a mix of studio, one, two and three-bedroom options, most of which would have balconies.

Want to help chart the future of Bay View?

If you’re an urban design consultant, you can get paid to do so. As part of creating a new comprehensive area plan for the Bay View neighborhood, the Department of City Development (DCD) is seeking a consultant.

Without getting off your couch, you can help make a proposed downtown dog park a reality.

The park, to be built on a vacant lot under Interstate 794, is one of 30 finalists for PetSafe’s Bark for Your Park contest. The five proposals receiving the most online votes will receive $25,000 each while five runner-ups will receive $5,000 each.

“This much-needed community amenity will enhance downtown’s quality of life, as well as beautify one of downtown’s busiest gateways. I encourage the community to log on and vote,” said Milwaukee Downtown, Business Improvement District #21 economic development director Matt Dorner in a statement.

You can vote for the park once a day through August 31 on the PetSafe website. An email address is the only information required and an opt-in to PetSafe’s marketing email is not required.

The water is long gone, but the effects of a May 2020 storm are still being felt. An overnight rainstorm on May 17 and 18 dropped approximately three inches of rain on downtown Milwaukee in a short period of time and resulted in more than $65 million in damage.

The steam tunnel system flooded, resulting in boiling water shooting up to 35 feet in the air at one Westown intersection and We Energies‘ Public Service Building, 231 W. Michigan St., being heavily damaged as steam permeated every floor and surface. The cost to repair the utility’s headquarters was estimated at $60 million in January and work is still ongoing today.

A block north, the storm was wreaking havoc on another building. The 14-story, 578,000-square-foot 310W office building sustained approximately $5 million in damage as a sewer backed up into its basement. The building was closed for a number of days as a result.

Building owner Time Equities, via law firm Denenberg Tuffley, is now in the process of suing the city to recover its costs.

Construction work is underway on Verdigris, the second new apartment building to be carved out of the former Milwaukee Journal Sentinel complex.

Verdigis will fill the signature Journal Building, 333 W. State St., with 141 market-rate apartments. The six-story building was originally built in 1924 and is listed on the National Register of Historic Places as well as being locally historically protected.

The first project, known as Westtown Green, includes 77 units targeted at Milwaukee Area Technical College in the Journal Building’s 1962 addition to the east and will open this fall.

The Avenue, the mixed-use complex created from the former Shops of Grand Avenue Mall, has landed another office tenant.

The nonprofit will occupy the space currently utilized by Josh Krsnak‘s Hempel Cos., the co-developer of the space with Tony Janowiec.

A new book store and wine bar is planned for Bronzeville.

Cetonia Weston-Roy will open Niche Book Bar at 1937-1939 N. Martin Luther King Jr. Dr. It will be the first permanent home for the business, which Weston-Roy founded in 2019 as a mobile business using a display cart atop a bicycle.

Weston-Roy was selected as the winning respondent Monday afternoon by the Bronzeville Advisory Committee to a request for proposals from the Department of City Development.

A project to improve the perimeter of one of Downtown’s most popular parks is getting underway.

The project will replace matted grass, gravel and a deteriorating sidewalk with large, smooth pavers. The intent is to create a wider, durable surface to accommodate the variety of events and high pedestrian traffic the park hosts.