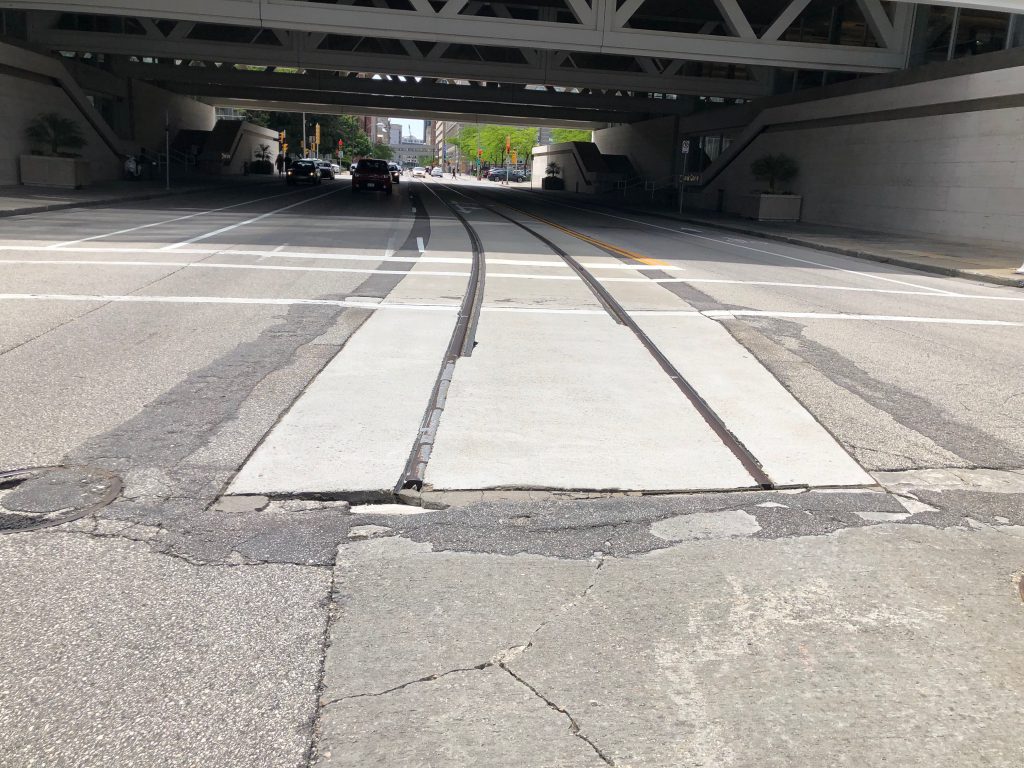 An extension of Milwaukee’s streetcar system, The Hop, is scheduled to open in June 2022, four years after much of it was completed.

The Common Council approved the lakefront line extension as part of approving the system’s 2.1-mile initial line in 2015. The federal government provided a $14.2 million grant to partially fund the extension and required the city to open the system by December 31st, 2020.

And for many years, that year-end 2020 deadline didn’t seem like it would be an issue. Much of the trackwork and all but one of the stations on the 0.4-mile extension was completed by the system’s November 2018 opening.

The day the system opened, developer Rick Barrett, no relation to the mayor, celebrated landing a key loan guarantee to advance The Couture, an apartment tower for 909 E. Michigan St. that would contain a signature station for the lakefront extension.

But then the delays began.

In the shadow of the Hoan Bridge, once derided as the bridge to nowhere, the streetcar to nowhere sat idle. Track abruptly terminates in the middle of the street on E. Michigan St. and E. Clybourn St.

Barrett Lo Visionary Development needed to raise additional equity to access the guarantee and experienced repeated delays. Common Council members started pushing for an alternative plan to route around the tower. And by mid-2020 it became clear the city wouldn’t make its deadline.

But Barrett Lo announced in June it had raised the necessary equity to start construction on the project it first proposed in 2012. The Federal Transit Administration gave the city an extension until July 31st, 2022 to submit expenses for reimbursement.

Construction is to begin on the $188-million tower in January. The city is to provide $19.5 million to the tower to offset the cost of the transit concourse, which will also be used by the East-West bus rapid transit line and other utility work.

Get a daily rundown of the top stories on Urban Milwaukee
A revised agreement between the city and Barrett Lo is pending before the Common Council and will be subject to a public hearing on Tuesday. It would require the developer, and its general contractor J.H. Findorff & Son Inc., to complete all the work necessary for the city to open the line to “revenue service” (passengers) by June 30th, 2022.

The tower itself is not expected to be completed by that point. A new estimate has the building being finished in early 2023, but that wouldn’t impede the ability to use the transit concourse.

We’ll have more coverage of the new tower and its complicated financing agreement following the meeting on Tuesday.

According to city maps, the lakefront extension or L Line, will run on an abbreviated version of the existing streetcar route (M Line).

The Milwaukee School of Engineering‘s project to expand an existing student housing complex is moving right along. A new structure is rising alongside the university’s 13-story Roy W. Johnson Hall at 1121 N. Milwaukee St.

The university is redeveloping the residence hall, its largest and oldest, into Viets Tower. Beyond increasing student capacity from 450 to 546, the redevelopment will add a number of collaboration spaces as part of a focus on creating a “living-learning community.” The $37 million project will develop space on the first floor for both residents and non-resident students alike. It will also transform the upper floors of the tower, which was built in 1965.

A glassy tower is being added to the building’s southern facade that overlooks the recently completed Dwight and Dian Diercks Computational Science Hall. A new plaza, built atop what is currently a surface parking lot, is planned to link the two buildings.

WoodSpring Suites Planned for Northwest Side

Kansas-based New Era Development Group plans to acquire a state-owned parcel of land on Milwaukee’s far northwest side and develop a 122-room hotel.

The firm would construct and operate a WoodSpring Suites extended-stay hotel on the 2.89-acre site adjacent to Interstate 41.

In September we reported that the Wisconsin Department of Transportation had a pending sale for the surplus property, most recently listed for $399,900. WisDOT declined to identify the buyer, but city records indicated the property was slated to become a hotel.

The program, backed by a $3.5 million grant from Chase, is focused on small business development and commercial property revitalization in the city’s historic commercial corridors. LISC Milwaukee administers the program.

Twenty-four businesses, 100 percent of which are owned by entrepreneurs of color, were announced as winners. In addition, nine property owners will receive grants to improve properties in targeted areas.

Looking for property in the city to develop? The Department of City Development could soon have 10 new options to market to you.

The Department of Public Works determined 10 city-owned parking lots are underutilized and plans to transfer them to DCD to be sold. The Common Council is set to review the transfers later this month.

“[DPW] has reviewed its inventory of parking lots and determined that the following lots are underutilized and are no longer of service to the residents and businesses in the areas where they are located,” says a city report.

The commission had previously used its authority to grant the building a 180-day temporary historic designation.

Completed in 1966, the building was one of many libraries the city built from the late 1950s to early 1970s. As the city has sought to replace or redevelop the aging properties in the past decade, it’s the only one to have drawn interest in preservation.

The latest report from the Wisconsin Realtors Association shows more than 9,447 home sales last month, up 24.9 percent from October 2019.

Economist David Clark of Marquette University said mortgage rates have made the already-strong demand for homes even stronger.