Is A Couture Deal Finally Coming?

City officials say it is, while Ald. Bauman pushes city to separate streetcar from project.

The Couture Rendering. Rendering by RINKA.

The Couture, a proposed 44-story, $122 million apartment tower, has been on the drawing boards since 2012. And while developer Barrett Lo Visionary Development continues to work to secure financing, a planned streetcar station in its base has been on hold.

But city officials say an announcement on the real estate project is coming next month. “We believe late June we will have an announcement,” said Lori Lutzka, Department of City Development special projects manager, during a Wednesday morning meeting of the Public Works Committee.

The project is key to the city’s plan to open an extension of The Hop.  The tracks and stations, without the planned loop through the project site at 909 E. Michigan St., have sat idle since 2018 and members of the Common Council have asked city officials to consider other options to complete the transit line.

“The concern I have had for two years is we tied this streetcar to the completion of a private real estate project,” said Alderman Robert Bauman . “We all hope The Couture gets built, it’s a beautiful building, outstanding architecture, the problem is that we married that project to a public infrastructure project.” 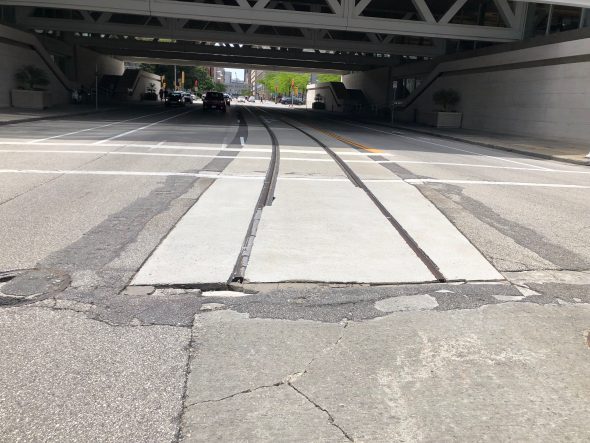 The project currently has a cost of approximately $30 million with a $14.7 million federal grant paying for almost half the work. Polenske said the funding remains available. But that grant requires the city put the line into operation by the end of 2020, a date for which the city will need to apply for an extension. Lutzka’s boss, DCD Commissioner Rocky Marcoux, committed in September 2019 to making a decision on the viability of The Couture by June 30th, 2020.

Bauman would prefer the city pursue crossing Lincoln Memorial because he views it as a superior station location. “Separate the projects, come up with the extra $10 million and get things finished,” he said, asking for DCD to identify a tax-incremental financing district. The alderman said avoiding the need to cross the busy street on foot would be a boon to riders.

But Polenske echoed Lutzka’s comments. “We do think there will be very positive news at the end of June to share,” said the commissioner. Representatives of the Department of Public Works, Milwaukee County and DCD have a weekly conference on Friday mornings with project representatives, including individuals from Robert W. Baird and Co. which was engaged to help find financing. Lutzka said they have been positive meetings.

“This is an opportunity for a 44-story, $100 million building to be built when we need it most,” she said.

Bauman isn’t buying it. “This is exactly the same kind of happy talk the Wisconsin Center engaged in,” he said. The alderman, a member of the convention center’s board, was critical of its plan to advance a $419 million expansion project during a pandemic. “So please stop with the propaganda.”

Lutzka said new Milwaukee County Executive David Crowley has yet to be briefed on the project.

“Could anyone suggest to the new county executive to take the land back and put out a new [request for proposals]?” asked Bauman. Milwaukee County maintains a clawback provision on the two-acre site, which it sold for $500,000, if the project does not advance.

“No developer in Milwaukee thinks this building will be built and they have very specific reasons for that,” said Bauman, citing rentable space and the building’s design. Multiple members of the development community have also expressed skepticism to Urban Milwaukee on similar grounds.

Developer Rick Barrett (no relation to the mayor) said in May 2019 he was working to raise the remaining $15 million in equity needed to fulfill a federal requirement to access a loan guarantee.

The city has already agreed to contribute $17.5 million to the project through a tax-incremental financing district to support the construction of a streetcar and bus terminal in the building’s base as well as a three-story public atrium. An additional $2 million was added to the public financing package to pay for relocation of a previously undocumented 48-inch-wide sewer that runs through the site.

The committee held the matter Wednesday, just as it has over the past year, but Bauman promised to force the issue at an upcoming meeting.

Conservative radio host Mark Belling tweeted in December that the final financing for the project had been raised, but the developer said they had nothing new to share at the time.

The tower is being designed by architecture firm RINKA and J.H. Findorff & Son is slated to serve as the general contractor and oversaw the demolition of the Downtown Transit Center on the two-acre project site.