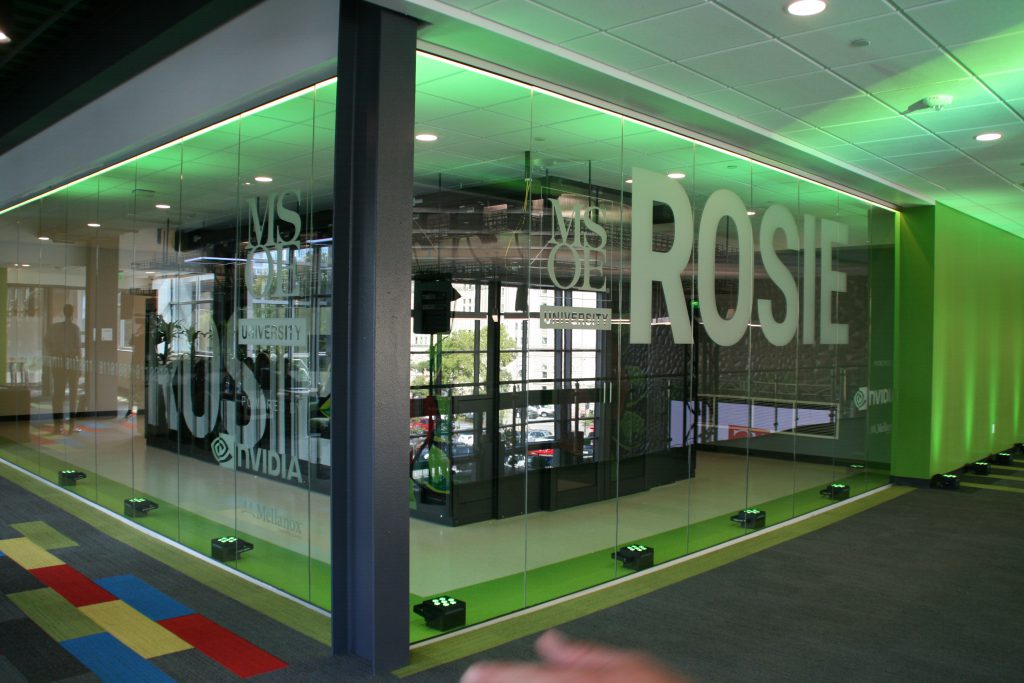 Rosie the supercomputer at MSOE. Photo by Jeramey Jannene.

Dwight and Dian Diercks‘ dream is now a reality.

The Milwaukee School of Engineering celebrated the opening of its new artificial intelligence focused academic hall on Friday morning, the centerpiece of a new computer science degree program. Hundreds gathered, including the Diercks, school leaders, dozens of local industry leaders, a few politicians and one NBA player, to watch the couple cut a ceremonial ribbon and boot up the building’s supercomputer. Students, in their first week back on campus, lined the second story of the building’s large atrium and gathered before a large screen on Milwaukee Street to follow along.

“Artifical intelligence will generate more jobs over the next 50 years than any other technology plant,” said Dwight Diercks, a 1990 graduate of MSOE, in his speech. He praised his alma matter’s efforts to embrace the explosion of computer processing power. “We are nimble, we are fast, we are efficient, we are MSOE,” said the NVIDIA vice president. The Diercks’ gift of $34.3 million, which covered the cost of the building, is the largest from an alum in the university’s history.

The building’s design includes a number of intentional, and unintentional nods, to its focus on computer science. A change in the location of a staircase pushed the building’s size from 64,000 square feet to just over 65,536 square feet, a significant number in computer programming not lost on Diercks. “The computer science building being a true 64k, we have got to change the marketing on the literature,” proclaimed Dwight to laughter from the many engineers in the room. The data center, housing the new supercomputer, measures in at approximately 1,024 square feet. The auditorium has 256 seats. The first three floors are colored red, green and blue respectively, a nod to the RGB computer color system.

But the building isn’t just for computer science students. “This is one of the things I like most about the building, it will serve all of our students,” said MSOE president Dr. John Y. Walz. He told the audience the university is on track to soon have as many companies recruiting talent from it as it has students looking for jobs.

The new computer science program, now in its second year, welcomed 75 freshmen this year, the second-largest new class of any degree program on campus.

MSOE, the Diercks, and the new hall also drew praise from politicians in attendance. “This is probably the most significant day in the history of this school,” said Mayor Tom Barrett about the 116-year-old institution. “But it’s also incredibly important to the city of Milwaukee.” He said the facility and university show that Milwaukee is on the cutting edge of education and technology.

Department of Administration Secretary Joel Brennan, representing Governor Tony Evers, who is on an economic development trip in Japan, offered effusive praise of the university. “Because it is so integrated into the city, the changes to MSOE’s campus seem subtle, but the reimagining of this campus has been remarkable for those of us who live and work in this city” said the Milwaukee resident. Brennan said MSOE is “humble and capable,” just like Milwaukee. “But Diercks Hall and what it means for the region is worth shouting from the rooftops about,” concluded the former Discovery World leader.

The Diercks had a number of guests in the audience, including a former high school teacher who taught Dwight the importance of always learning and the family of a former MSOE professor who pushed Diercks and others to their limits. Diercks’ boss, NVIDIA founder Jensen Huang, was also in the audience. Collectively, he said, the three are cornerstones of what the building is built on.

The MSOE Regent also had one very tall friend in the audience, Golden State Warriors center and Milwaukee native Kevon Looney. The Diercks, who reside in the San Francisco Bay Area, are nine-year Warriors season ticket holders and Dwight met Looney at a fundraiser. “Sometimes people, when I say I went to university in Milwaukee, ‘say did you go to Marquette?’ And I say ‘no, no, no, real engineering,'” said Diercks. He said when he met Looney and learned he was from Milwaukee, Looney asked if he went to MSOE. The 23-year-old knew to ask about MSOE given his time spent playing at MSOE’s Kern Center athletic facility. 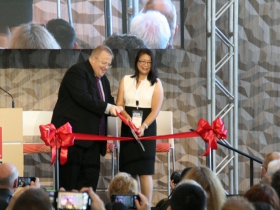 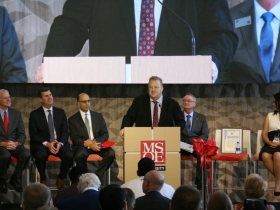 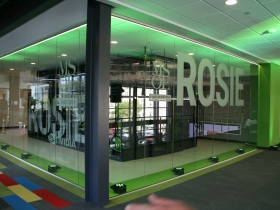 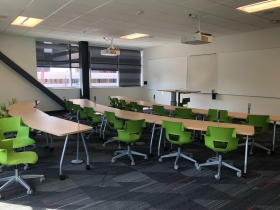 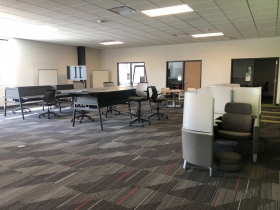 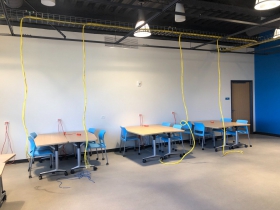 The building’s centerpiece is something almost no one at MSOE will ever touch directly with their hands, a supercomputer. Located in a glass-wrapped room, the computer is built from NVIDIA equipment donated by Diercks and the company as well as networking equipment from Mellanox. Dwight said the goal is to make calculations that would normally take days take only seconds.

It also has a name, “Rosie.” Dwight said the name is a reference to the women that programmed the first computer, the ENIAC. The name has a double-meaning for the Diercks, though: Dwight’s late mother was named Rosie.

The data center was moved from what Dwight said was a “closet” to a primary position. Recalling a conversation with the design team, Dwight said “Can’t we put the data center right there on the atrium where we can view it and worship it?” So they did.

In addition to the Diercks’ contribution, the university has raised $4.5 million to support the building’s ongoing maintenance needs and upgrades to the supercomputer.

Dwight joked that Dian was okay with the ever growing cost of the building so long as he gave the speech at the opening. Planning on the facility goes back to 2015, he added.

Next up for the university? Construction of Hermann Viets Tower from the shell of its oldest residence hall.