By Megan Hart, Wisconsin Public Radio - Dec 3rd, 2020 03:15 pm
Get a daily rundown of the top stories on Urban Milwaukee 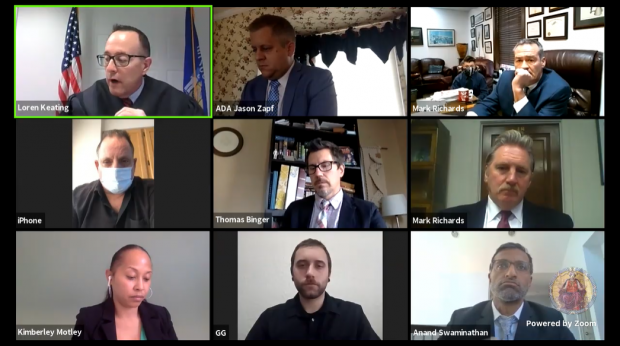 A preliminary hearing for Illinois teen Kyle Rittenhouse was held Thursday, Dec. 3, 2020. Rittenhouse is accused of killing two men at a protest in August. Megan Hart/WPR

An Illinois teen accused of killing two men and wounding a third at an August protest in Kenosha will face trial.

Rittenhouse is charged with five felonies, including first-degree intentional homicide. On Thursday, Keating declined the defense’s request to drop counts related to possession of a dangerous weapon by a minor and recklessly endangering safety.

Rittenhouse was charged with the latter count after police said he fired his weapon near a journalist during the Aug. 25 protest. His attorney argued the journalist wasn’t in danger, but Keating wasn’t so sure.

“In this case, when you discharge, or it’s alleged that this defendant discharged the firearm in a crowded urban environment, one could argue that’s inherently dangerous nonetheless,” Keating said.

But he says the issue of whether it was done in self-defense is a matter for trial.

The Antioch, Illinois, teenager is currently free on $2 million bail.

Rittenhouse appeared Thursday from the office of his attorney Mark Richards. During the proceedings, Richards indicated through his line of questioning that self-defense is likely to play a central role in his argument at Rittenhouse’s trial.

The August protest took place in the wake of the police shooting of Jacob Blake in Kenosha. Anthony Huber, 26, and Joseph Rosenbaum, 36, were killed, while Gaige Grosskreutz was shot in the arm. Grosskreutz survived.

Rittenhouse Will Stand Trial After Judge Finds Probable Cause In Kenosha Shooting Case was originally published by Wisconsin Public Radio.

One thought on “Rittenhouse Will Stand Trial on All Charges”