Should Milwaukee Stop The Hop?

Alderman proposes this, but suspending the service might cost more than it saves. 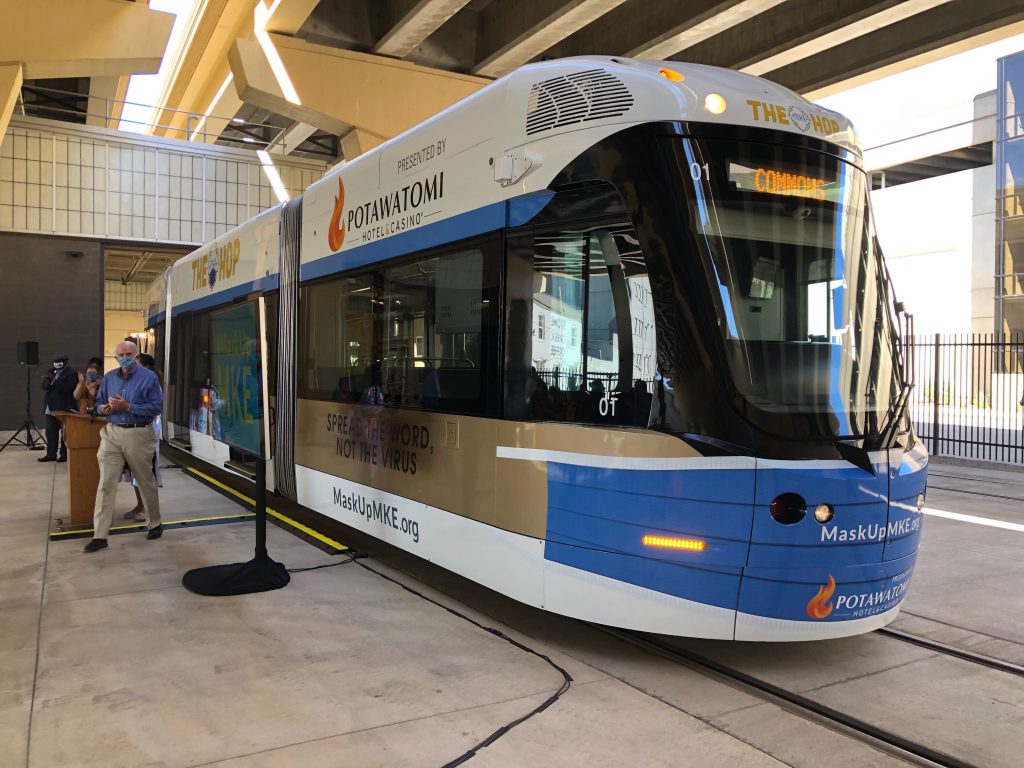 The Hop sports a Mask Up MKE wrap. Photo by Jeramey Jannene.

The City of Milwaukee is facing a budget crisis and a federal grant that funds startup operations of The Hop, Milwaukee’s streetcar system, will soon run out.

So why not simply suspend the service until the crisis is over?

Alderman Michael Murphy asked the question, given to him by a constituent, at a budget hearing Friday morning.

But Department of Public Works Commissioner Jeff Polenske said it’s not that simple. Halting operations would trigger a bill totaling tens of millions of dollars.

“When we decided to make this improvement we did it in significant part with federal money and as part of that we entered into kind of a contractual agreement or project agreement with the federal government,” said Polenske. “We do have an obligation to operate this for the life of the improvement.”

The federal government contributed $69.1 million to the $128.1 million system, including the partially-completed lakefront line.

“I have had written conversations with the Federal Transit Administration and they certainly have concurred that we do have a legal obligation as part of that contractual agreement to continue to operate,” said Polenske. The commissioner said the contract includes benchmarks for frequency and hours of service.

But even if the city could halt operations temporarily, Polenske said there would be costs to that. “There really isn’t a shutting down option. There still is this underlying operation that needs to take place to maintain the infrastructure and maintain the vehicles,” he said. “There is also a cost of having to retrain the workforce that operates the system.”

Cincinnati took the highly unusual step with its system, similar in length to Milwaukee’s, of operating with no passengers from late March through early September instead of suspending operations. The move avoided restart costs estimated to run from $325,000 to $1 million.

Get a daily rundown of the top stories on Urban Milwaukee
The Hop, similar to the Milwaukee County Transit System, has not shut down during the pandemic. But ridership did fall. It has now recovered to 30 percent of estimated levels according to a DPW report, a level that Polenske said is consistent with other streetcar systems.

The commissioner said the service has become an “essential” part of the city’s transportation network. “Well it is a single route, we are part of a system,” said Polenske. MCTS rerouted routes 15 and 30 as part of the system’s construction to avoid duplicating service.

Murphy, who voted for the system, said he would be submitting a formal letter to DPW asking for a written opinion.

Ald. Scott Spiker, who hasn’t been in office long enough to vote on the system, said he was concerned about the costs. “One might think people can be reasoned with in these extraordinary times,” said the far southside alderman.

Polenske said the streetcar did receive federal aid via an allocation to transit systems through the CARES Act and he anticipated a second bailout would also include The Hop. The Milwaukee area received approximately $62 million from a formula-based $25 billion transit bailout. Over $50 million went to MCTS.

City budget director Dennis Yaccarino said having to use parking revenue to fund the streetcar was expected. “Back when we talked about the streetcar in 2010 we did anticipate the transportation fund would have to provide funding for this,” he said.

The Hop is budgeted to cost $4.5 million in 2021 according to Mayor Tom Barrett‘s budget proposal. A total of $1.2 million would come from Potawatomi Hotel & Casino’s sponsorship, a delayed-but-not-canceled kiosk system and other sponsorship deals. A city reports says $110,000 would come from a Section 5307 FTA grant.

There is a precedent for the federal government seeking its funds back. The Downtown Transit Center, the now-demolished bus facility at 909 E. Michigan St., had not reached the end of its life when it was sold. In order to avoid having to repay a couple million dollars in unamortized costs to the federal government, a transit concourse for The Hop and East-West bus rapid transit line will be constructed in the base of The Couture tower.

3 thoughts on “Transportation: Should Milwaukee Stop The Hop?”