Streetcar Kiosks Could Bring In $500,000 Annually

System of 35 interactive kiosks could be online as early as May. 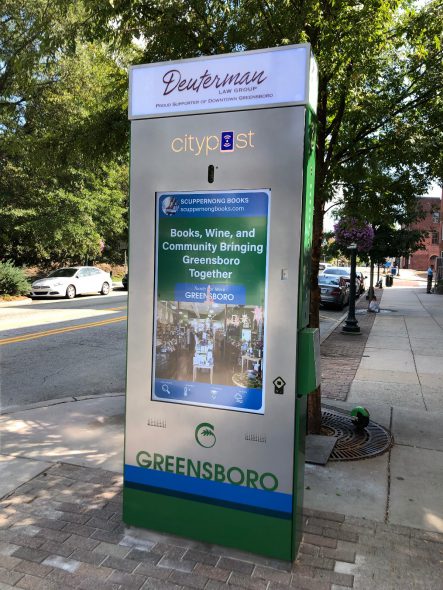 CityPost Smart Kiosk in Greensboro, NC. Photo courtesy of the City of Milwaukee.

Milwaukee’s streetcar system will soon be more visible, as will a lot of advertisements.

A public-private partnership between the City and Smart City Media will enable the construction of 35 eight-and-a-half-feet-tall “smart kiosks” at the 17 streetcar stops on the 2.1-mile-long first phase and additional nearby locations.

Smart City Media is a privately-owned company that partners with transit systems and other entities to install and operate interactive, digital kiosks providing information and advertisements.

The city anticipates hundreds of thousands of dollars annually from the privately-owned system. “We’re being a little bit conservative, but it’s probably in that $300,000 to $500,000 range,” said Department of Public Works Commissioner Jeff Polenske on Thursday morning before the Public Works Committee. “It could be more.”

Beyond providing streetcar operations funding as part of a revenue-sharing agreement, Polenske said the system will provide valuable information on upcoming vehicle arrivals, including a countdown timer, and other wayfinding information. Directions to nearby bus routes and Bublr Bikes stations will be available. “We always intended to fulfill those gaps in communications,” said Polenske.

The 41-inch-wide and 11.6-inch-deep kiosks, known as CityPosts, include a 55-inch touchscreen. Users will see ads approximately half the time and touch the screen to access information. Smart City will sell those ads.

Additional kiosks will be installed at locations intended to help increase the visibility of The Hop and vice versa. “For example, the stops on [E. Ogden St.], trying to make that connection to Brady Street,” said Polenske, noting only four blocks separate the streetcar from the Lower East Side commercial corridor. All of the locations will be located in the public right of way. “Right now we are working on the locations.”

An interactive “selfie” camera will be included to allow those using the kiosks to snap photos said Rosenberg.

Alderman Robert Bauman asked about public safety benefits. The locations will include 360-degree cameras accessible by the Milwaukee Police Department said Rosenberg. They will also have cameras and microphones for users to interact with in the event of emergencies.

The kiosks would have the capability to make noise on their own through the ads, even without interaction, but Polenske said the contract prevents that from happening without city approval. “Short of that, especially not on a regular basis, we should not be making noise on a public street,” said Ald. Nik Kovac.

The first kiosks could be installed as early as May, with the full system online by July in time for the Democratic National Convention.

5 thoughts on “Transportation: Streetcar Kiosks Could Bring In $500,000 Annually”