By Isiah Holmes, Wisconsin Examiner - Jun 19th, 2020 03:38 pm
Get a daily rundown of the top stories on Urban Milwaukee 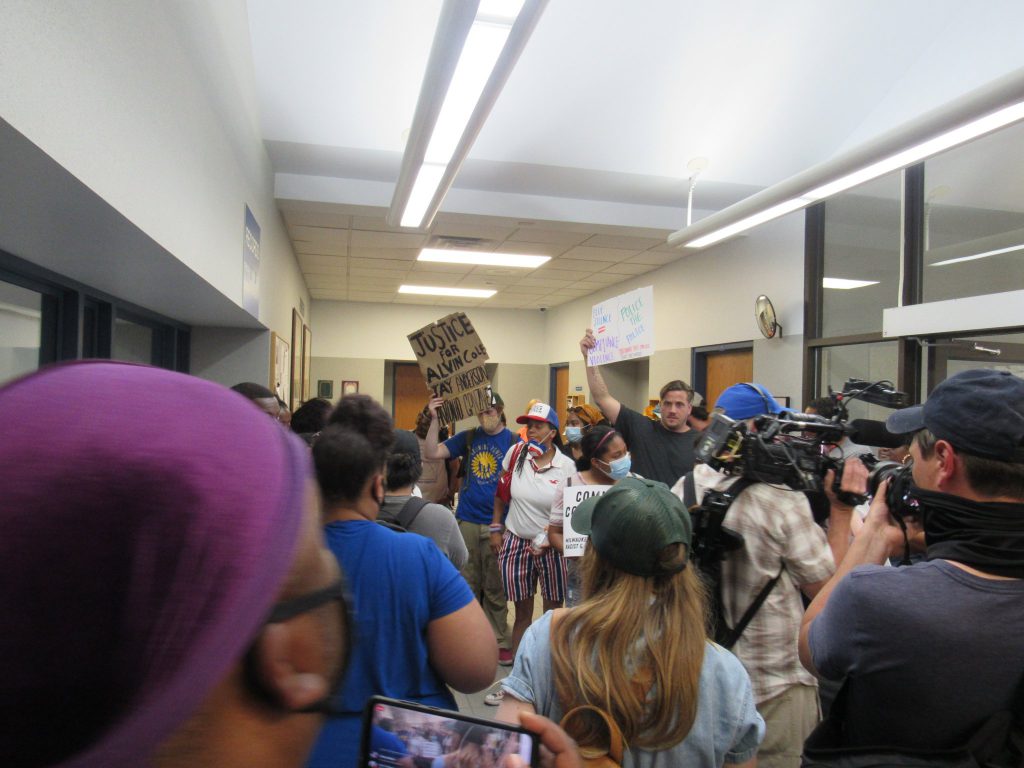 One by one, an ever-growing caravan of cars streamed down 116th street in Wauwatosa, often shortened to “Tosa.” The quiet suburban neighborhood where the Wauwatosa Police Department (WPD) is located, never sees this kind of traffic. But on Thursday, protest chants filled the air as marchers gathered in front of the police station, before invading and occupying the WPD’s small lobby area.

They had come to demand that Chief Barry Weber come out and face them. Less than an hour before Kimberley Motley, a lawyer representing the families of three people killed by Tosa officer Joseph Mensah since 2015, filed a formal complaint against Mensah at Tosa’s city hall.

“It’s specifically calling for the termination of Officer Mensah, as well as body cameras, and that he [Mensah] should be criminally prosecuted,” Motley told Wisconsin Examiner. “The complaint was on the behalf of the Anderson family, and so we focused on Jay Anderson’s death on June 23, 2016.”

“The Wauwatosa Fire and Police Commission is entrusted with the responsibility of firing police officers when circumstances call for their termination,” the complaint reads. “We believe that Officer Mensah’s actions under the leadership of Chief Weber has shown that he is a threat to public safety in Wauwatosa.” The complaint, addressed to the office of newly elected Tosa Mayor Dennis McBride, calls on the city’s Fire and Police Commission to exercise its authority to fire Mensah.

Anderson’s father Jay Sr. said seeing the demonstration inside the station, “it feels like justice.” Anderson’s mother Linda added, “it’s just a shame that Weber didn’t come out.” The couple was not surprised though. Despite their attempts over four years, they said they have never been able to confront Weber face-to-face. “Chief Weber needs to go,” Jay Sr. told Wisconsin Examiner.

“We need to get him [Weber] out,” said Linda. “For him to allow Joseph Mensah to still be on the force, after three killings? He got to go.”

Mensah shot the 25-year-old Anderson several times after, he says, Anderson reached for a gun. But police officers removed the gun from the car before taking pictures for evidence. Video of the incident was also limited to less than 30 seconds of mute dash footage from Mensah’s vehicle. Jay Anderson Jr.’s family has maintained he was sleeping in his car when Mensah arrived, and that footage shows him passing out from intoxication, not reaching for a gun.

A separate June 11 letter to Milwaukee District Attorney John Chisholm, issued by Motley Legal, makes note of the lack of video evidence in Anderson’s case. “We understand that you previously advised Weber that his department should obtain and mandate the use of body-worn cameras, and that the lack of such equipment hampered your efforts to fully investigate Jay Anderson’s death.” Though Weber downplayed the necessity of body cameras in 2014, he has recently made more supportive comments.

After filing the complaint at Tosa city hall, Motley met dozens of protesters at WPD in an attempt to draw out Weber. Instead of the chief, a captain exited from the back area, where a few staff worked behind thick protective glass. Though parts of the department’s parking lot is under construction, concrete blockades had also been placed right outside the main doors, presumably to protect the building’s main entrance.

The captain said that the chief was in the building but wasn’t available, and is willing to set up an appointment to meet with the families. Many were incredulous, and openly pointed out Weber’s increasingly frequent appearances on local news. “But he doesn’t have time for us,” Tracy Cole, the mother of 17-year-old Alvin Cole, shot by Mensah in February, responded in frustration. Regardless, Weber wasn’t coming out. And when the captain retreated back behind the locked door, the protesters got loud.

They chanted, even using handheld loud speakers inside the cramped space. Marchers said the names of 28-year-old Antonio Gonzales, Anderson and the younger Cole. Familiar slogans of the Black Lives Matter movement rang, with some modified on the fly into catchier rap-like styles. Protesters called out Weber and Mensah by name, chanting that they be fired. “No Justice, no peace!” It went on, and on. Meanwhile, protesters outside kept pace with their own chants, essentially creating two distinct demonstrations.

“There have been no other deaths of citizens at the hands of Wauwatosa police other than those that Mensah is responsible for at least within the last seven years,” reads the letter to Chisholm. Gonzales — who was holding a sword when officers arrived at his home following a call —and Anderson were shot by Mensah’s within his first 11 months at the department.

Motley has also filed open records requests regarding a series of incidents which involved Wauwatosa officers over 30 years ago. Weber was still a new chief, and had to contend with a Tosa Police and Fire Commission investigation into 13 of his officers.

The men had been holding derogatory Martin Luther King Day parties at their homes for several years. Officers showed up in stereotypical clothing and black face, serving watermelon and engaging in other overtly racist activities. After the investigation, one of the officers was promoted to lieutenant by Weber. The chief said at the time that he didn’t believe there were any “lingering effects” from the man’s participation at the parties, some of which he had hosted in his home.

She feels this history sets the officer apart from other Tosa police. “The longer he remains on the police force,” she said, “the less credibility the Wauwatosa Police Department is able to maintain.” The demonstrations didn’t disperse. They reorganized into a march on Mayfair mall, where Cole was shot in the parking lot, as the marchers’ voices continued to echo within WPD’s muted walls.