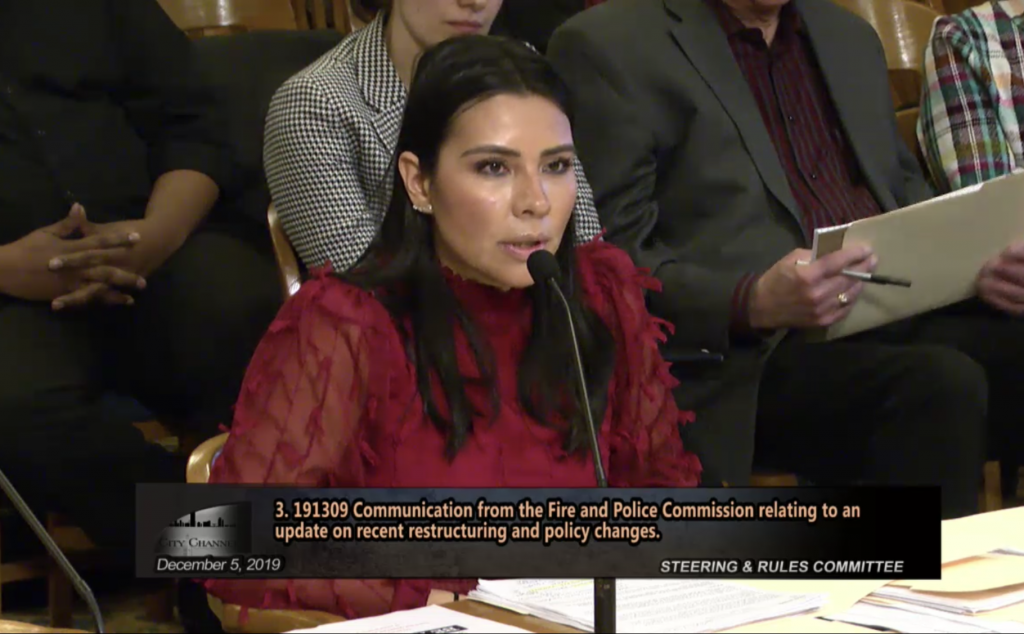 FPC Executive Director Griselda Aldrete speaks before the Common Council. Image from the City of Milwaukee.

The hearing comes after Aldrete, on the job since August, changed the organizational structure of the 28-member department and multiple employees publicly resigned or were terminated.

“Only one other time have I ever received written correspondence from employees having problems with the job, and that was from the health department ironically,” said Alderman Robert Bauman of the troubled department that is still under criminal investigation. He said current FPC employees have approached him asking for help.

During the public portion of the hearing, the committee would hear of trespassing by former employees, the department’s workload, a defense of Aldrete from fire and police department officials and criticism of past directors by Fire Chief Mark Rohlfing. The committee also spent almost two hours in closed session.

“I will stay true to what I said during my confirmation process, I am a transparent individual that has integrity,” said Aldrete in her opening remarks. She told the council she loves the job and the challenge it offers.

The commission staff serves a nine-member board that is in charge of overseeing the operations, procedures and hiring for the Milwaukee Police Department and Milwaukee Fire Department.

Aldrete told the committee that 14 out of 28 positions on the commission staff are currently vacant. Since starting fulltime on September 10th, Aldrete has seen four employees resign and fired three others. She said she’s hired four people.

When would she fill the other vacancies? That she wouldn’t say. “I see it as an opportunity to build a department,” said Aldrete, who noted that she needed to assess needs and other challenges the department faces.

Of the 14 vacancies, six are in the department’s testing unit, including for the staffing services manager. Multiple sources told Urban Milwaukee that Robin Joseph was recently terminated from the managerial position.

Aldrete said the organizational changes, which created a more hierarchical structure, were warranted after the staffing changes.

Aldrete said that she started a security audit after noticing issues with how two citizens were able to access much of the commission’s City Hall offices while visiting to file complaints. “The audit found that there entrances into the FPC offices at odd hours of the night,” said Aldrete, including by former employees with badges. The results of the audit came in on November 4th.

“So you’re telling us that former city employees were in City Hall after City Hall was closed to the public?” asked Bauman. “And while City Hall was open,” responded Aldrete.

“That is a crime,” said Bauman. “For over a month you have not contacted the Milwaukee Police Department?” Aldrete said she hadn’t directly contacted the police, instead reporting the issue to the Department of Employee Relations whose offices are connected to the FPC office.

“I’ve only been here three months,” said Aldrete in response to a long line of questioning from Bauman.

“Let’s just put a pin in that one so we don’t get stuck on it and deal with it in closed session,” said council president Ashanti Hamilton.

Alderwoman Milele A. Coggs told the committee before the meeting was over that she had requested a council file be created during the meeting to standardize the badge deactivation process.

How Productive is Aldrete?

A central issue in the meeting became Aldrete’s productivity.

“If that’s the case how come you never said nothing during the budget,” responded Alderman Russell W. Stamper, II. “It’s not my job,” said Rohlfing. The departments brief the council’s finance committee on their needs and challenges annually.

The two entered into a back-and-forth that resulted in Bauman throwing his hands in the air, many council members expressing disbelief and eventually Hamilton slamming his gavel.

“We are not going to devolve into a shouting match,” said Hamilton.

“I am sorry that my frustration got the best of me,” said Rohlfing.

“As finance chair for the last few years,” Coggs said, “both the fire chief and police chief have not made it a secret of their concerns with their timing of testing and their ability to do promotions.” But Coggs said other concerns the chief raised with responsiveness and accountability weren’t previously mentioned.

Howard said Aldrete was able to push through hiring for 29 emergency communication officers that the department had been short on since Alfonso Morales became chief. “We waited almost two years to get those promotions filled,” said Howard. The officers handle 911 calls to the city.

“Speaking truth to power, it’s something we all struggle with,” said Lipcki. “When you speak against power in this city you’re not around for long.” He also added that the city is writhing in pain.

Multiple council members objected to the entire line of reasoning.

“The point I’m making, ‘by god she came in and 29 people were hired,’ bull crap,” said Donovan. “The council has been screaming about this for years and you all know it here.”

“We have heard some of the most astounding testimony I have ever heard from the Milwaukee Fire Department,” said Bauman.

“Let’s say the wheels did fall off the bus and the Fire and Police Commission was in total free fall for past three years. Did you tell the mayor that?”

“She came in and got it done,” said Banks. Howard and Banks said that during Barrett’s accountability in management (AIM) meetings the issue had been brought up. The positions were authorized in March, but still weren’t filled until Aldrete started. “Those are the facts,” said Banks. Rohlfing said the department has also brought the issues up during AIM meetings.

Coggs said department heads need to let the council know when these issues exist. “If you don’t want to do it in a public forum, at least let us know privately,” said the Finance & Personnel Committee chair.

“It all doesn’t add up,” said Ald. Nik Kovac, who pointed out that Aldrete faces staffing challenges, has lost a top employee shortly after she started and is still able to get things done. Why wasn’t Crump, praised by Banks, able to make anything happen?

“You’re doing twice the work with half the staff,” said Bauman, backing Kovac’s statement. He suggested if that’s true the budget should be cut. But Bauman also said he was concerned with complaints in the two resignation letters.

“If half of what they say is true, it’s very disturbing,” said Bauman. Investigator Cheryl Patane said in her four-page letter that Aldrete has: “frightening ignorance of FPC operations, shown no apparent knowledge of industry norms for public safety oversight investigations, and worse, fostered an environment of mistrust and cronyism.”

Ald. Mark Borkowski came to Aldrete’s defense. “Remember that she has only been with us three full months,” said Borkowski. “Most importantly, I would like to know what she inherited. Everything is getting dumped on our executive director and it’s not fair.”

While in closed session, city officials are able to freely discuss personnel matters and potential lawsuits.

Hamilton said the session was informative and that what appears as a connected issue is a series of individual personnel issues. “There was a lot of information that helped clarify that decision making. It will be coming out soon after their personnel issues are settled,” said the council president.

“There is no blanket ‘oh this major thing happened’,” said Hamilton.

Should the public be concerned? “No,” said Hamilton. He said the struggles were a result of “growing pains” and that the executive director position is in a “pressure cooker” with the attention and demands placed on public safety officials in Milwaukee.

He said many council members would still welcome an investigation, but added: “I think by and large that there is a commitment to continue to support [Aldrete].”

“I don’t think that there is anything happening right now that would cause us to change directions at this point in time,” said the council president. “We are encouraging stronger community relationships. We are encouraging communication and transparency. We believe that she can achieve those things with the support of the community.”

Barrett’s office issued a brief statement defending Aldrete, who faced criticism from not only the committee, but mayoral candidate Lena Taylor in a mid-day press conference. “Under the leadership of Fire and Police Commission Director Griselda Aldrete, the department is undergoing changes to increase accountability and transparency. The Mayor is very supportive of these efforts,” wrote Barrett.

Aldrete in her testimony said the department was dealing with a number of appeals of disciplinary decisions, 42 open records requests and 19 proposed changes to standard operating procedures.

She said the commission was dealing with a heavy workload when factoring those issues in, along with the need to review vendor contracts, performing testing for hiring and promotions and weigh the reappointment of Morales.

Aldrete told the committee she regularly talks with former executive director La Keisha Butler, who left the job after only a few months and moved to Alabama with her husband, and Bohl for guidance.

Coggs asked Aldrete a series of questions relating to technical issues with core board functions, many of which have been recently raised by activist and watchdog Paul Mozina. Had public comments been restricted at meetings? Were files in Legistar, the city’s record system, not being updated? Were records not being forwarded?

Aldrete said she considered the video recordings of meetings to be public record, which drew raised eyebrows from Bauman and others. She said she has one dedicated staff member who will be taking verbatim notes. “I cannot do it alone,” said Aldrete, who operates as secretary to the FPC board during meetings.

“So how does a citizen get access to the files?” asked Coggs.

“But if it’s not in there?” responded Coggs.

Aldrete said she was focused on the files for prior years that weren’t in the system. “If you go back to 2018, none of those files are in Legistar,” said Aldrete. The FPC has only recently begun inputting its public files into Legistar similar to how the Common Council does.

Mozina and others have raised the issue with Urban Milwaukee that records are not being updated following meetings where the commission acts.

A review of the Legistar file for Standard Operating Procedure 130, which deals with the city’s cooperation with Immigration and Customs Enforcement (ICE), shows attachments containing the proposed change. Direct links to video footage from meetings is not available.