The Western That Wanted Oscars

‘Hostiles” was touted as “best western since ‘Unforgiven.’” Dead wrong. 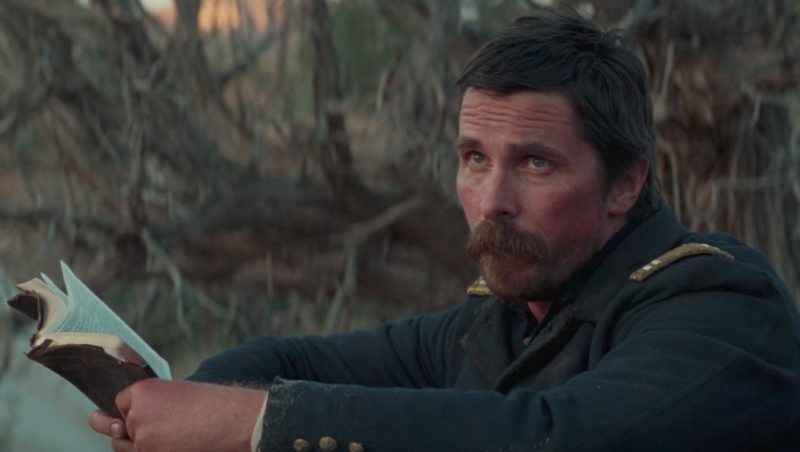 If you were near a TV screen in December and then again January, you saw it hailed in its own ads as “the best western since Unforgiven” and star Christian Bale touted as “the new Marlon Brando.”

It’s a movie that tried mightily to be part of the Oscars (ceremony March 4) and failed.

It played many prestigious film festivals last fall and kept delaying its national opening hoping for some deeper praise from the awards givers, while picking up its TV advertising pace.

Finally it went national January 26 of this year – a delay that is also part of the awards game but in this case weeks after first planned. Several noted films delayed national openings – notably The Post and Phantom Thread – in hope of standing out from the Christmas crowd. This one was a delay in search of a spark.

Strangely there wasn’t a heavy hostile reaction to Hostiles among the reviewers, which ranged from good to tepid, but there sure has been indifference among the public despite the high regard Bale is held in. As a connoisseur of westerns – which often serve as an open range war for film-makers exploring good and evil, violence and redemption — I think it is the film’s fault not the genre’s. I would like to see more good westerns but not so obviously trudging ponderously over established paths.

Also I have been fascinated by Bale’s career and growth since he was a child actor in Steven Spielberg’s Empire of the Sun (1987) through Batman movies and into several recent standouts such as The Big Short and American Hustle.

But this is straight-on two hours of Bale as suffering stoic, the retiring, brutal but infinitely polite Army captain in the Old West forced to gather up an ever-growing and sometimes slaughtered caravan of soldiers, Indians, pioneer widow and random horseback enemies in 1892.

His special mission involves a hated member of this caravan, Chief Yellow Hawk, whom he watched kill close friends even as he was equally vicious killing the chief’s clan – both sides adept at massacres. Now he must safely deliver the dying chief to holy ground in Montana. That actor, Wes Studi, a Cherokee Indian famous for playing all manner of Indians with chiseled face and honest simple delivery, is one of the few plusses of the film.

Bale is certainly a convincing one-note conflicted soldier – I doubt there are many actors who could keep us watching every twitch to see if anything important will crop up. It doesn’t. 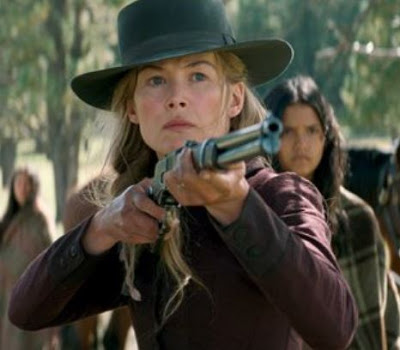 The film also has a convincing hysterical extended fit by Rosamund Pike as a pioneer wife who has seen her husband and three children brutally murdered by wildly painted renegades and attempts to bury them with her own hands as she screams the theater into silence. And after accomplishing those extremes, she subdues into typical western ingénue willing to grab a rifle to help her savior, in this case Bale of course.

Director and screenwriter Scott Cooper clearly wanted to grab the mantle of western as soul redemption – a theme that sticks its head up not just in Unforgiven but also Stagecoach and The Searchers, films this plot strangely emulates.

But those films had a lot more hooks, variety and human connections going for them despite their old-fashioned lack of blood and accurate wardrobe. Making up with blood and accurate hairbraids is not the road forward. The redemption message, subdued or complicated in the others, juts out of every scene in Hostiles. The values of tight editing seem lost on Cooper. He relishes every diversion as if in love with the terrain.

Interestingly there is a bit part as an unskilled trooper for Timothee Chalamet, who was also a passing love interest in Lady Bird but got an early dismissal in these films while being Oscar front and center in Call Me By Your Name.

The film expects focusing on Bale will make meaningful a parade of extended farewell scenes. Even those who like westerns may find this parade stupefying.

Hostiles received funding and publicity efforts from a variety of outfits credited in introductory logos (I counted six), so the film can never claim they didn’t try. But they didn’t succeed, and in this field of competition they shouldn’t.