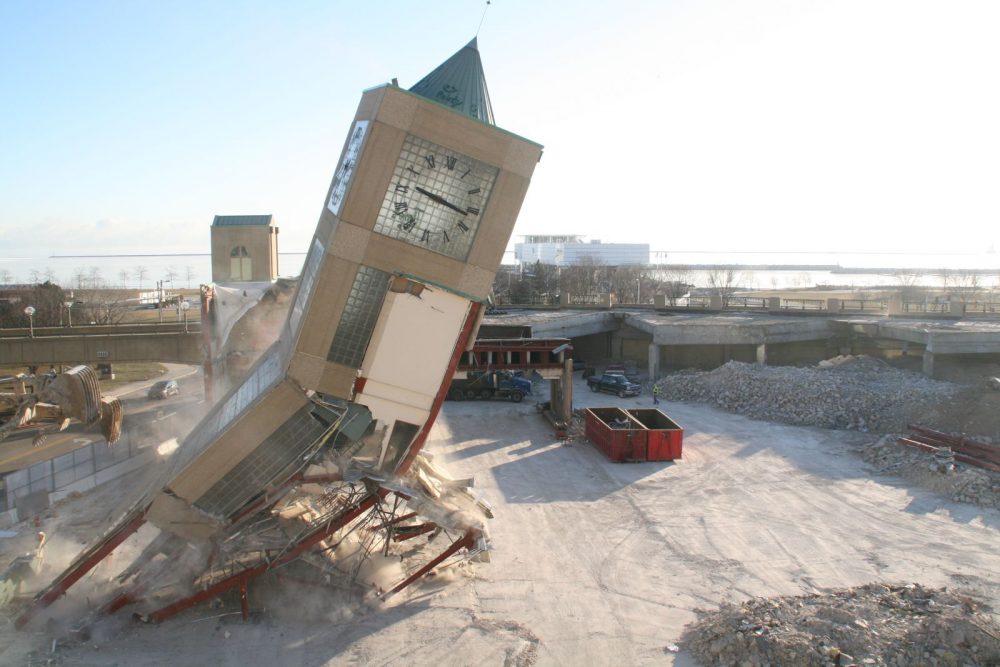 Crews from Veit and J.H. Findorff & Son braved the freezing temperatures as the sun rose Saturday morning to complete a milestone in redeveloping Milwaukee’s lakefront. A small team worked with blowtorches and excavators to knock off the five-story clock tower at the Downtown Transit Center.

Our photos capture the process, including the tower crashing to the ground and wall of dust rising up. Unlike a recent knockdown on N. Farwell Ave. that was described by some as a “mini earthquake,” the transit center’s obliteration went off without a hitch.

The Downtown Transit Center, located at the eastern end of E. Michigan St. on Milwaukee’s lakefront, had a brief run as a true transit center. When completed in 1992 the facility served as the downtown hub for an express line that connected the northwest side of the city via N. Fond du Lac Ave. to Downtown. That service never caught on and was eventually eliminated. The building lived on as the terminus of a number of routes, serving more as a operator rest stop than as a passenger boarding facility. The facility’s design and location were certainly contributing factors in its lack of use: it had very few windows, felt similar to a cavern on the inside and was located well off the key service corridor of Wisconsin Ave.

The now-demolished clock tower was designed in-part as an homage to the iconic Chicago & North Western Lakefront Railway Depot. That building, a far more attractive and high-usage transit facility, was located roughly a block north. Opened in 1890, it was demolished in 1968. Its demolition helped launch a movement towards historic preservation in Milwaukee.

Construction of the $122 million The Couture, a proposed 44-story, 302-unit apartment tower, is expected to begin as soon as demolition is completed. Developer Barrett Lo Visionary Development acquired the roughly two-acre site from the county in August for $500,000, but as part of the deal is also required to pay the demolition costs as well as incorporating a streetcar and bus rapid transit stop in the base of the building. A significant public access component, which will connect O’Donnell Park and Downtown to the lakefront and a new, yet-to-be-completed park will be incorporated into the building with a series of bridges. Design of the tower and new park are both being led by Milwaukee-firm Rinka Chung Architecture. The city is involved in financing a portion of the development, particularly the streetcar component, with a tax-incremental financing district.

The streetcar’s lakefront line and proposed east-west bus-rapid transit line are expected to begin operating through The Couture in 2019 at the earliest. 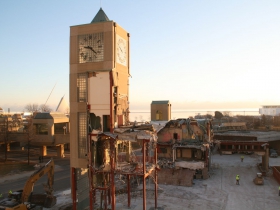 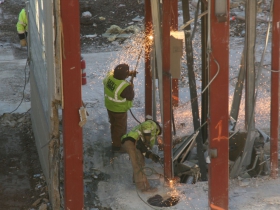 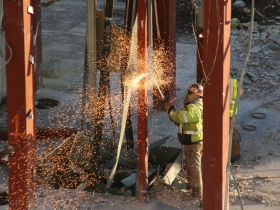 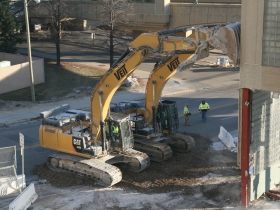 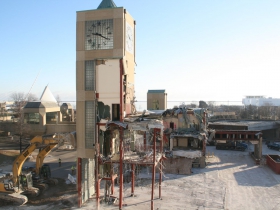 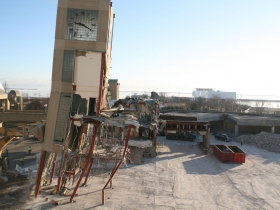 For more on the project see our coverage from December 30th “Goodbye Downtown Transit Center” or our August article “The Couture is Finally Happening,” which includes photos of the inside of the transit center.