Inside the Aperture Apartments

Mandel Group's latest building in The North End may be the last word in amenities. 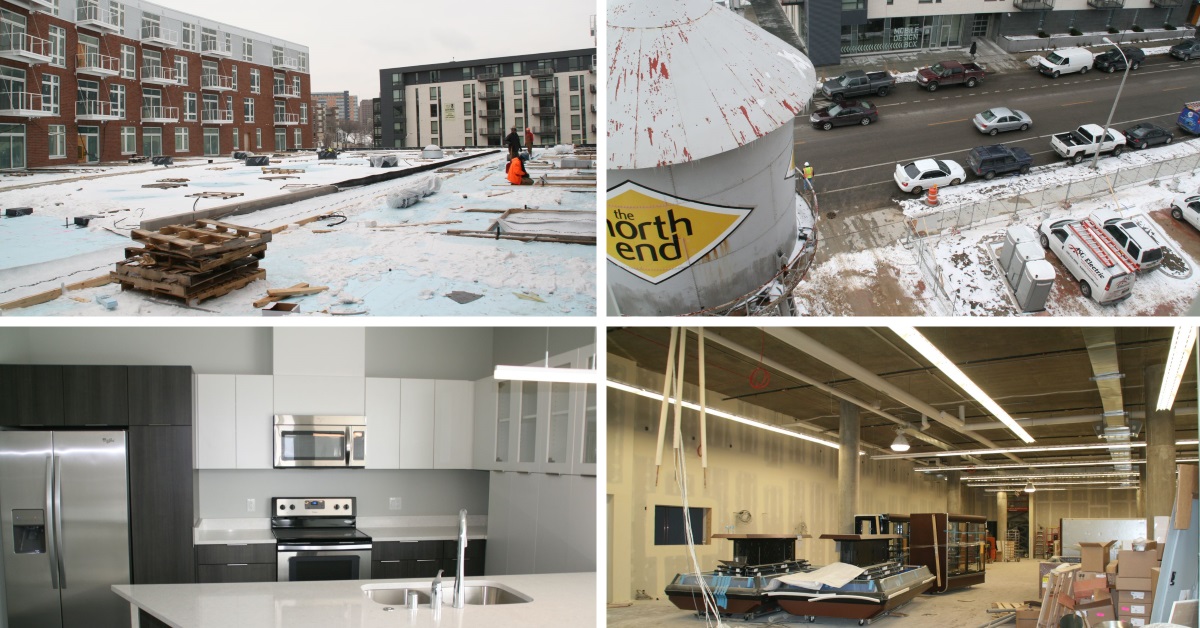 Aperture at The North End

The Aperture apartments are nearly ready for occupancy. The project, which represents the third phase of the Mandel Group‘s The North End, brings an additional 168 apartments to Milwaukee’s Lower East Side and helps fill the hole in development between Downtown and the vibrant Brady Street corridor. In addition, the project includes the first Fresh Thyme Farmers Market grocery store in Wisconsin.

Apartments start on the third floor of the building, and depending on the location, feature views of the river or skyline. Rents for the large studios start at $1,275, with one- and two-bedroom units coming in incrementally higher depending on layout and location.

The first residents will be able to move into the east side of the building at the end of March, with the rest of the building coming online by June. Tenants will find quartz countertops, cultured marble vanities and in-unit laundry in every unit. In addition, virtually every apartment includes built-in shelving units and a balcony.

Every unit will include USB charging outlets. In another concession to electronics and comfort, a central wiring location is included in every unit to allow tenants to hide all of the equipment powering their televisions. Should they ever take a break from all those amenities, residents will find unique murals by local artists on every floor.

While indoor access to a grocery store is likely an attractive part of the sales pitch, the building’s features also include a fitness center, yoga studio, bicycle repair space, lounge, coffee bar and club room. According to Mandel, the free coffee bar will feature an “electronic barrista” dishing out different local coffee brands. The club room will include six large televisions, perfect for watching multiple sporting events simultaneously.

The high ceilings required by the grocery store mean that all of these first-floor amenities have equally high ceilings, nice for residents. The ceilings are perhaps most notable in the lobby, which features a welcoming staircase and fireplace. An ornamental, three-piece light is planned for the space, but wasn’t installed when I toured the building in mid-February.

A number of environmentally-friendly features are included in the building. Most notable is the green roof atop the grocery store. Tenants will be able to access the space, which includes a grilling area, patio space and walking pathways. Units directly on the roof each have their own private balconies. Each floor features its own centralized hot water system for efficiency, with each unit having a York high-efficiency furnace. All of the windows are Anderson fiberglass composite windows.

Parking is provided in the building, with one level underground. The underground parking will include roughly 100 stalls for the grocery store, and includes an escalator system for people and carts. Approximately 60 stalls are provided underground for tenants, with two more levels stacked above. Tenants will find an car-charging station on every level, something likely to be more popular as electric cars continue to decline in price. A Bublr Bikes station will also accompany the development, to be located near the southeast corner of the site.

See our photo gallery for more details on the building. 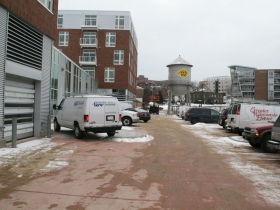 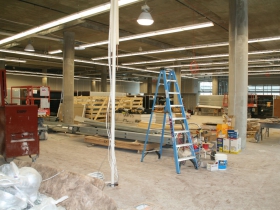 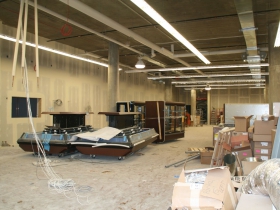 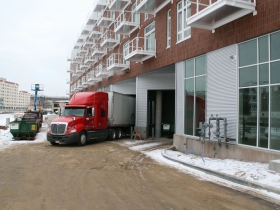 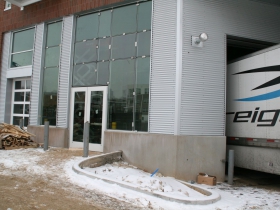 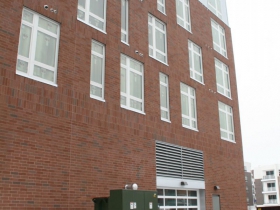 Fresh Thyme is a new, Midwest-based chain that is already planning additional stores in the Milwaukee area. Visitors will find the 29,500 square-feet store includes the everyday needs, but not the overwhelming selection that can create a paradox of too-much choice at some stores. Their inventory is instead focused on fresh and organic foods, with a number of options ready for those on the run. For those that can linger, they’ll find ample dining areas provided indoors and out, with seating along the riverwalk and along E. Pleasant St. The Fresh Thyme Farmers Market is targeting a May opening.

Designed by Jim Shields and his team at HGA Architects, the six-story building is shaped like a horseshoe. The site is fraught with a number of design challenges, but generally responds quite well. The south side of the site includes an unbuildable swath of land caused by below-ground infrastructure belonging to the Milwaukee Metropolitan Sewerage District that therefore features a 17-stall surface parking lot and the former Pfister & Vogel water tower anchoring the south end. The east side of the site curves to match N. Water St., but the building responds in turn, bending to follow the road and creating unique views for future residents.

The grocery store presents a number of challenges itself. Unlike the typical suburban style design, this grocery store is shoehorned into a mixed-use building. Its heating, ventilating and air conditioning equipment is tucked away into all sorts of clever places. Deliveries for the grocery store will be made at a loading dock described by the Mandel Group’s Andy Wiegman as “the nicest loading dock of all time.” And that’s good, because it’s along the riverwalk. The dock features an extensive number of windows.

Ray Hintz Inc. led the general contracting on this project, as the firm has for all but one of The North End buildings.

Aperture wasn’t easily financed. The $53-million project was brought together with what developer Barry Mandel called “extremely complex financing” at the project’s groundbreaking. That included $10.5 million in federal New Market Tax Credits from the Wisconsin Housing and Economic Development Authority to help finance the grocery store portion, owing to the “food desert” status of the area to the west. As part of receiving those credits, Mandel was required to make a minimum $100,000 donation to the Walnut Way Conservation Corp.

Want To Go Inside?

The Mandel Group is hosting an event on Friday, March 11th from 6 p.m. until 9 p.m. to show off the new model unit. The event is free and open to the public. Learn more on the event’s Facebook page.

Aperture is the fourth building in The North End, an entirely new neighborhood replacing the former Pfister & Vogel Tannery. The new building joins the ONE, Portrait and Silhouette apartment buildings located to the south across E. Pleasant St. For more on the project and other activity in the area, see my January story on construction of the next phase starting.

3 thoughts on “Eyes on Milwaukee: Inside the Aperture Apartments”