By this time next year, the Mandel Group‘s new complex, The North End, will contain 406 apartments and 45,000 square-feet of retail space. Located between N. Water St. and the Milwaukee River, the “neighborhood by design” is undergoing its third phase of construction.  The latest phase is a $53 million project that will add a six-story, 168-unit apartment building with a first-floor, 29,5000 sq-ft Fresh Thyme grocery store.

The new building was designed by HGA Architects & Engineers (whose Milwaukee office is next door to Mandel’s in the Marine Terminal Lofts) and is being constructed by Ray Hintz General Contractors and a number of sub-contractors. As our photos capture, a number of people were on-site today putting in the foundation for the building and an underground parking garage. The market rate building is scheduled to open in late 2015 at the northwest corner of N. Water St. and E. Pleasant St.

According to Barry Mandel, it was former Mayor John Norquist that convinced him to buy the former Pfister & Vogel tannery in 2001, but current Mayor Tom Barrett is a big Mandel supporter as well. Barrett called Mandel “the Michael Jordan of development” at the ground breaking for the third phase in October. Mandel says the project replaces the doughnut hole in Downtown with a project that weaves together the urban fabric, creates jobs and an on-going tax-base for the city.

The project has $36 million in what the developer calls “extremely complex financing” including $10.5 million in New Market Tax Credits that support the grocery store. The Park East tax incremental financing district also is providing $8 million to cover partial construction costs of a new 420 feet long Milwaukee RiverWalk segment as well as environmental remediation of the site and other infrastructure needs.

The iconic water tower will stay on the site in its current location (it was formerly on the roof of the tannery), but will be accented by a Bublr Bikes bike sharing station that Mandel is sponsoring.

If you want to know what the site looked like just a few short months ago, see my colleague Michael Horne‘s coverage of the groundbreaking. We’ve also extensively covered the development of the other three project buildings, ONE, Portrait and Silhouette.

When the fourth and final phase is completed (with a target groundbreaking in 2015), the project will consist of 675 apartments, numerous commercial spaces, a grocery store, and a combined $175 million investment.

The investment in The North End is drawing others to the neighborhood, much of which was blighted for years by the now-demolished Park East Freeway. Just across N. Water St., demolition work on The Curve tavern is underway as it will be replaced by Tim Gokhman‘s The Rhythm, a 140-unit apartment building. Just up the hill from The Curve and The North End lies three new apartment buildings that have opened (SAGE on Jackson, East Terrace Apartments, Avante Apartments). In the footprint of the former freeway, Wangard Partners is putting the final touches on the first phase of its Avenir Apartments project.  New businesses are finding their way to the new residents as well, with Alderaan Coffee opening across from The North End in the Flatiron Condominiums. 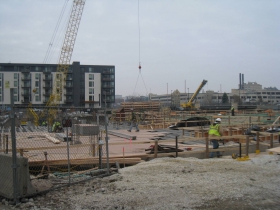 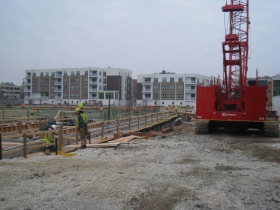 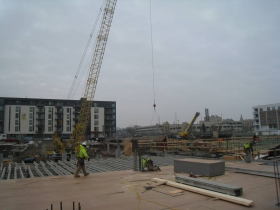 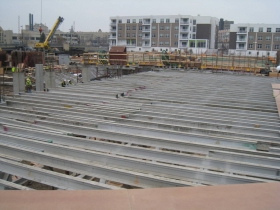 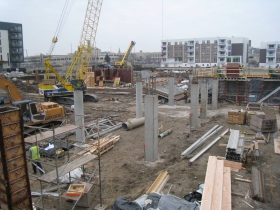 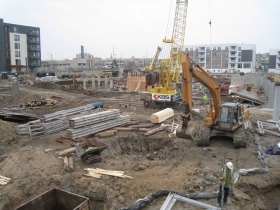 4 thoughts on “Friday Photos: Construction Underway at The North End”