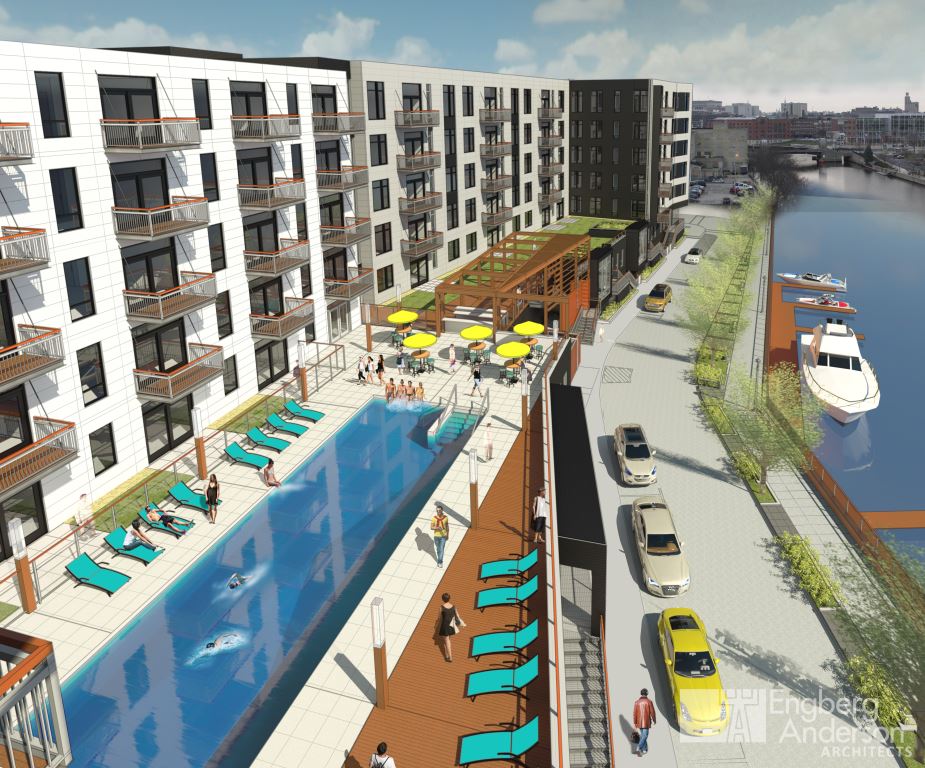 The North End, an ongoing project by the Mandel Group, has entered its fourth phase.

North End IV, as the Romans might dub it, is now underway, with construction workers battling the elements to start a six-story, 155-unit building. The North End project originally broke ground in 2008 and has transformed the vacant Pfister & Vogel tannery along N. Water St. into what the firm calls “a neighborhood by design.” When the fourth phase is complete in 2017, the $175.1 million project will have replaced one of Milwaukee’s largest brownfields with 561 apartments, numerous commercial spaces and a new grocery store.

The fourth phase is being developed at the south end of The North End site along N. Water St. The building, a six-story, 155-unit building, will include a new Milwaukee RiverWalk segment as well as a outdoor swimming pool for tenants. Indoor parking for the complex will be hidden by first-floor units, consistent with the river frontage at the Silhouette building just to the north. Mandel is also teasing other amenities in the building, but firm vice president Phillip Aiello noted that “we’ll wait a bit to finalize specific designs for these spaces before we bring them out publicly.”

A second building was originally included in the planned fourth phase, but was ultimately separated into its own phase. That building is planned to have 90 apartments spread over six stories and will be located at the northeast corner of the intersection of N. Water St. and N. Milwaukee St.

Leasing remains strong at the complex, with Mandel reporting the open units are 96% occupied. Aiello explained that “Given the state of the current market, we forecast that Aperture will reach full occupancy by the end of 2016. Thereafter, new apartments in Phase IV will begin delivering in mid‐2017.”

Design work on the two new buildings is being led by Eric Ponto of Engberg Anderson. The fourth and fifth phases are expected to cost $58 million and have no retail planned, unlike the earlier phases. Project financing is being provided by Associated Bank and Johnson Bank.

The North End’s third phase, dubbed Aperture, is expected to open this year. Much of the exterior work is complete and a model unit is expected to open in early February. When complete it will include 168 apartments and a new, 29,500 square-foot Fresh Thyme Farmers Market grocery store. The horseshoe-shaped building is expected to cost $53 million when complete and will include a new segment of the Milwaukee RiverWalk. Construction on that complex started in 2014 with design work led by HGA Architects and Engineers. A new Bublr Bikes bike-sharing station, paid for by Mandel, will be installed along E. Pleasant St. as part of the project.

In addition to the riverwalk component, The North End includes a park space dubbed Denim Park at the southwest corner of N. Water St. and E. Pleasant St. where Mandel Group has held a summer concert series for the past few years. Retail activity at the site has steadily increased as new buildings have come online, including the recent addition of a  Anytime Fitness 24-hour gym.

The challenge of starting a development so large during a recession didn’t go unnoticed by the banks. Mandel had to creatively finance a number of parts of the project, receiving $2.4 million in federal New Market Tax Credits for the grocery store, Park East tax-incremental financing for portions of the riverwalk, a $4.6 million loan from the city and a $24.1 million loan from the Wisconsin Housing and Economic Development Authority to support the second phase. Barry Mandel himself called the third phase’s financing “extremely complex” at the project’s groundbreaking, with mayor Tom Barrett taking the stage shortly thereafter to proclaim Mandel the “Michael Jordan of Milwaukee development.” Jordan certainly had to do a lot less math to win his six NBA championships than Mandel will have done to build the six buildings of The North End. 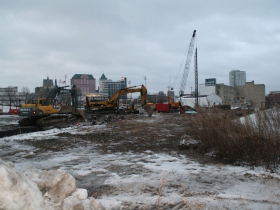 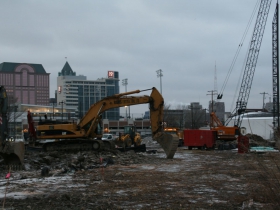 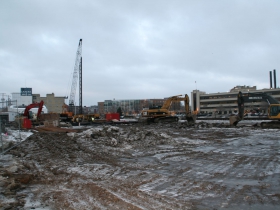 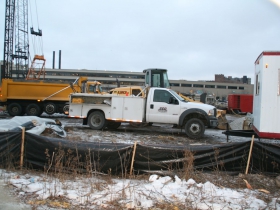 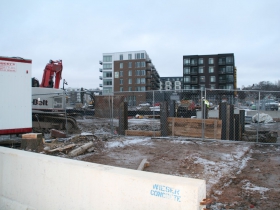 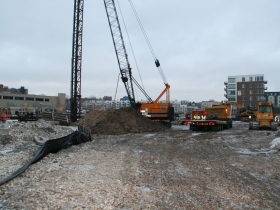 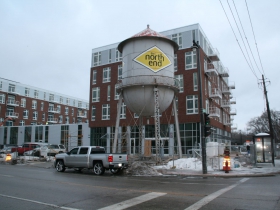 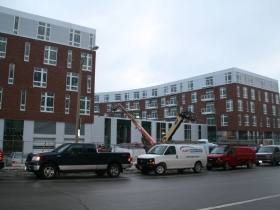 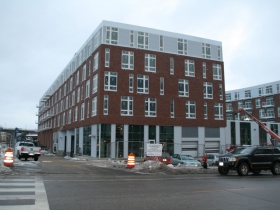 When The North End started, the only active project in the area was The Flatiron condominiums, located on the southeast corner of N. Water St. and E. Pleasant St. Now the neighborhood a veritable boomtown.

Wangard Partners is seeking approval for the second (82 units) and third (64 units) phases of their Avenir Apartments, and those two phases will join the 104-unit first phase (opened in 2015) in wrapping the block bordered by E. Lyon St., N. Jefferson St., E. Ogden St. and N. Milwaukee St. Wangard is also seeking to buy the block immediately to the west from Milwaukee County and develop hundreds of new apartments on the site. The firm is also exploring conversion of the Laacke & Joys Building at 1433 N. Water St. into an office building with up to 200,000 square feet of space. Finally, Wangard has also demolished the former Habhegger Wheel & Axle building at 1701 N. Water St. and is planning a substantial mixed-use project for the site.

As if all that wasn’t enough, just up the hill on formerly sleepy N. Jackson St., three new apartment buildings have opened. Within a two year window, the Avante Apartments (34 units), Sage on Jackson (20 units), and East Terrace Apartments (14 units) all opened.

All of this might seem like development insanity, except for the fact that developers keep reporting occupancy rates near 100 percent.