New complex with 168 apartments will add density to an area that's booming with development.

Work began on the $53 million third phase of The North End in July 2014 when an existing building on the northwest corner of N. Water and E. Pleasant streets was demolished to make way for this new six-story mixed-use development by the Mandel Group. By September 2014 construction of the project was underway, though the official groundbreaking ceremony was held in October. By late October the basement excavation was completed, a new dock wall was in place, and piles were being driven deep into the ground.  Work continued through the last few months and the building is now rising above ground.

When completed the development will include, a six-floor building with 168 apartments and a 29,500 square foot Fresh Thyme Farmers Market, as well as parking, a new RiverWalk segment, and the continuation of a N. Edison St. along the river. Amenities for tenants include a fitness center with a yoga studio, a clubroom, an internet cafe, a pet grooming and wash room, a bicycle repair shop, a recycling center, and a car wash station.  A Bublr Bikes station will located near the water tower at at the corner of N. Water and E. Pleasant streets.

The neighborhood has seen many changes following the completion of the first two phases of the North End. Just across the street the Curve Bar‘s short run came to an end and some deconstruction has occurred on the building in preparation for its demolition to make way for a new apartment building,  to be called The Rhythm. Kitty-corner from this project Alderaan Coffee opened at 1560 N. Water St., in the FlatIron, as did Infinite Vapor.

New residential apartment buildings, Avante Apartments, Sage on Jackson, and East Terrace Apartments were built and now occupied on the nearby N. Jackson St. Pleasant Kafe, a coffee shop and wine bar, opened in a gutted- and-rehabbed building at the corner of E. Pleasant and N. Jackson streets. And just up N. Jefferson St. from the North End the soon-to-be-completed 104-unit Avenir mixed-use apartment building has completely leased its retail spaces with Zoup!, Great Clips, eliteNutrition, Jimmy John’s, and JK Nail signing on. The Avenir building opens to tenants on February 6th, 2015.

Our photos capture the progress of the final phase of the North End. 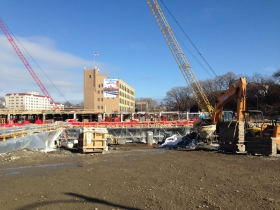 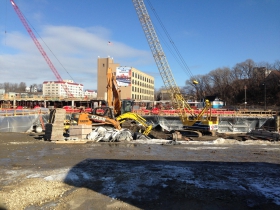 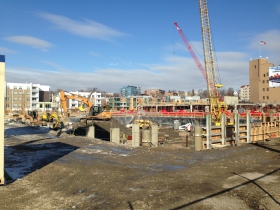 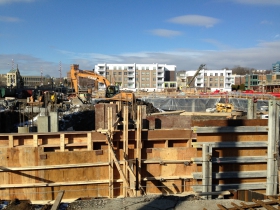 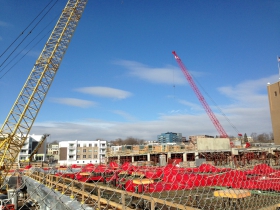 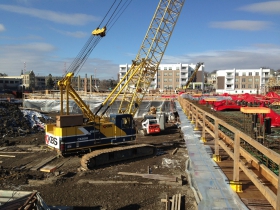 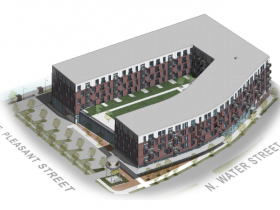 One thought on “Friday Photos: North End III is Rising”