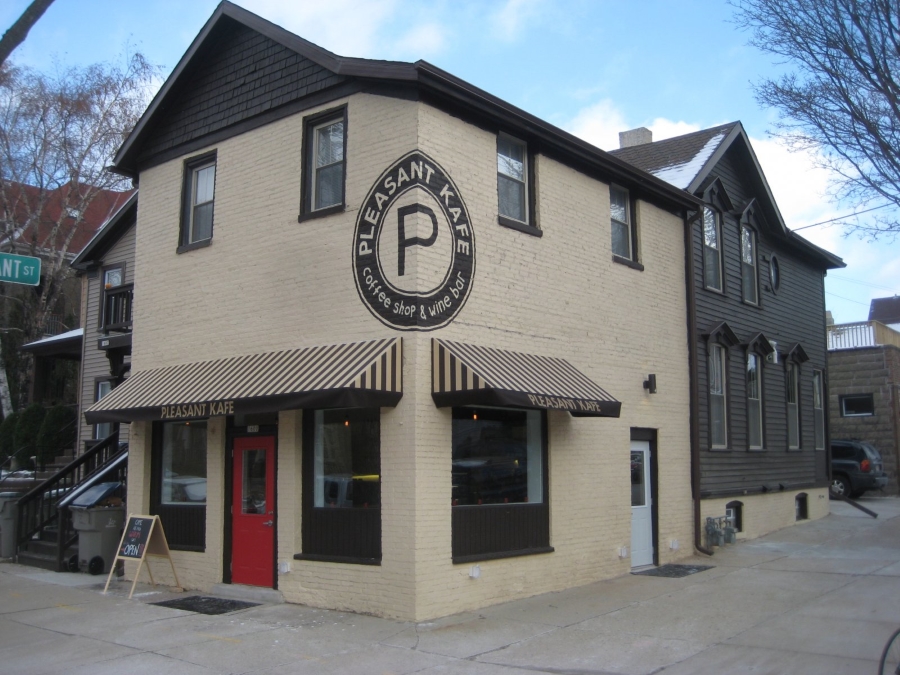 This is the story of how the Pleasant Kafe came into being.

About two years ago real estate investors Eric Seegers and Geoff Stone looked for an actual office for their business, rather than running the thing out of a basement. In February, 2013, they bought an old storefront at 610 E. Pleasant St., along with an adjoining Civil War-era cottage and corner building at 1600 N. Jackson St. that had been the home of Dentice Bros. sausage for over 70 years until the shop closed about 10 years before.

The $87,500 they paid for the parcels was pretty much just the value of the dirt. The unused buildings had been written down to $1,000 apiece by the assessor due to their deteriorating condition. A former garage on the site, built in 1924, had collapsed and was torn down in 2010. Some advisers suggested the wrecking ball treatment for the whole property, but the new owners had second thoughts after a business acquaintance had “an epiphany,” as Seegers put it.

“You need to open a coffee shop here,” the friend said.

But Seegers and Stone, who operate as GatoCity LLC, took their friend’s advice. “We did some research, market analysis, spreadsheets and decided to give it a shot,” says Seegers.

On Friday, November 15th, the pair had a soft opening for Pleasant Kafe, a coffee shop and wine bar in their newly renovated building just west of their new business office.

The transformation of the property is significant, as is the construction and development in the immediate area, which had long been a dead spot north of downtown. On the street, the 34-unit Avante Apartments, the 20-unit Sage on Jackson and the 14-unit East Terrace Apartments all opened within the past year within a block of the coffee shop, with more development on the way, bringing many more likely customers to the new coffee shop.

It took considerable effort to get the place habitable. Crews worked by hand excavating an old basement, and filling in part of it. The ancient structure had shifted on its foundations — a door jamb in the basement is almost comically out of square — and even after being stabilized, the 1865 frame structure is still charmingly crooked. Masons had to tear apart and rebuild part of the masonry corner store which had been grafted to the old house’s front in 1922.

Inside, the old house, which had long been an apartment, was joined to the new store by means of a small flight of stairs, providing a light, airy seating area and a good view of the action below from the mezzanine. That cozy upper area has five small tables, and a double table with facing bench seating. There is an “L”-shaped bar seating overlooking the street and cafe, with four chairs, and security cameras keeping watch on things.

Downstairs there are three tables along the south wall, and a bar with four stools facing the service area. A smaller bar at the window has two stools and a good view. Mellow international music from Pandora sets the mood. The lights, music and other apparatus is controlled from a tiny little closet down in the basement, where busybodies can’t fiddle with it. 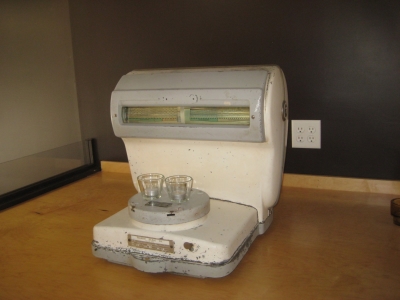 The partners recycled some of the old sausage shop stuff (not that there was much to work with) and used it in the new construction. On a ledge sits the Toledo Scale Co. Model 1051A (Serial #5390) that had been the most prominent feature (the only feature) of the sausage shop decor. Seegers and Stone also cleverly repurposed the old glass doors of the meat case, now fitted up as mirrors and hung in each of the two unisex bathrooms they built in the place.

The bathrooms and certain other areas of have period-appropriate white subway tile walls and quarry tile floors. Elsewhere the floors include wood (or woodish) materials and epoxy-finished cement, toasty warm from hydronic heat.

Lighting is from retro bare bulb fixtures hung from the ceiling, a portion of which is original to the meat shop.

The interior colors are coffee and cream, for want of a better description, and the finishes are simple and sound. The building retains its original fenestration, so occupants have a good view of the increasing action at the intersection of N. Jackson and E. Pleasant streets. This might be a good place to sit while waiting for a table at Sanford Restaurant, kitty corner to the southwest.

To manage the joint, the partners called on Geoff Stone’s mom Lorna Stone, who had run a coffee / gift shop in Elkhorn for 24 years. She still commutes there, but often stays at the home of her son, or a daughter, both of whom live on the East Side.

She has assembled quite an impressive wine list. The wines are from California, Italy, Australia, New Zealand, Chile, Argentina, Spain and France. Glasses are priced from $5 (Kenwood Yulupa Chardonnay) to $10 (Chateau La Grange Clinet), and up to $52 per bottle (Nicolaise Feuillate Champagne).

There is no Wisconsin wine (Stone says she’s thinking of Wollersheim Prairie Fume, indicating it might be the only state wine worthy of inclusion on her list.)

The bar offers pastries from Sciortino’s, Rishi Tea and other locally sourced goods. The beer selection is also strictly local, and all from Lakefront Brewery, which is located just across the Pleasant St. Bridge. The beers include Klisch Lager, Riverwest Stein Beer, East Side Dark, Cream City Pale Ale, New Grist Gluten-free and the seasonal Holiday Spice Beer (a.k.a. “Rocket Fuel”).

There is a cooler of elegant soft drinks, and good, reliable Pellegrino water. Let’s see, what else?

The beans are ground in a Mazzer grinder; and specialty drinks come from the Rancilio espresso machine, which was out of commission on opening day, but should be up and running by the time you read this. A grand opening event is planned for December 12th. 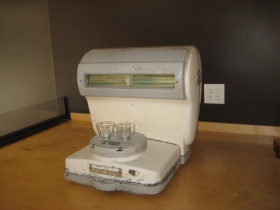 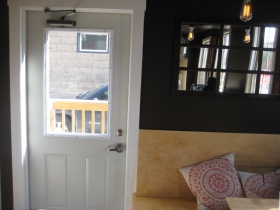 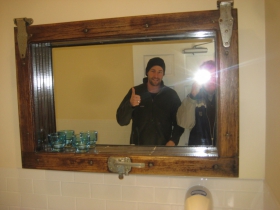 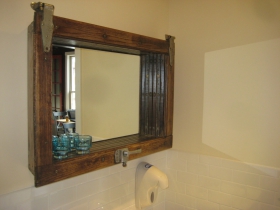 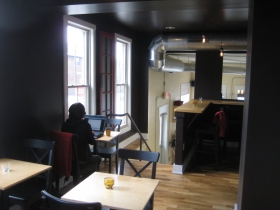 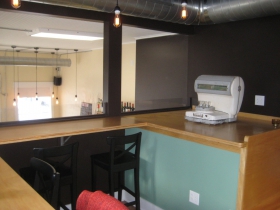 In a 2006 article in the Milwaukee Business Journal, Anthony Dentice, then aged 78, said he had been working in the shop founded by his uncle since the age of 8. Until its closing, it was the sole provider of sausage to Festa Italiana and the Italian Community Center.

The Dentice family (nee Dentici) eventually owned all of the properties on the north side of the street west of the alley, including a cottage that still exists. The store building at 610 E. Pleasant St., where GatoCity has its new offices, was constructed in 1922 for $3,500 at what was then 182 Pleasant St. In 1935 it became a retail fish store, after having spent its first decade as a prohibition-era tavern. The building was owned by Dentice and a partner and occupied by Dominic Balistrieri.

In 1971 the assessor noted a boarded-up front on the store, which he figured was making $60 a month in rent. In 1976, the assessor noted the building again saying, “it appears vacant, but is used for service shop – storage for phono – record sales.” However other sources, including the book Milwaukee Mafia, say the building was used as a front for the Balistrieri vending / gambling machine empire. Mob Boss Frank Balistrieri for many years lived on the same block in a building now being advertised as a development opportunity. The name of his late son, Joe Balistrieri, is one of many that was scratched back in the 1950s into the porous brick of the north wall of the Milwaukee Frame & Fabric Shop, located on the block at the intersection of E. Pleasant and N. Van Buren streets.

One thought on “Plenty of Horne: New Coffee House on Jackson Street”