$1 billion plan for new arena and other development would transform Park East land and tear down Bradley Center.

Plans for the new Milwaukee Bucks arena include the Milwaukee Streetcar, according to Michael Fascitelli, a developer and team investor who is the “quarterback” of the $1 billion plan to construct a new basketball facility and ancillary development downtown.

“We are planning a streetcar at the plaza at this time,” Fascitelli said in answer to my question at the unveiling of the arena plans at the BMO Harris Bradley Center Wednesday morning.

The “Plaza” would be a 60,000 square foot open space to be constructed on the block bounded by N. 4th St.,  N. Old World Third St.,  and W. Highland and W. McKinley avenues, where a city-owned parking structure would be demolished. The Plaza would have bars, restaurants, a water wall and outdoor fire pits. According to a press release from the team, provided by Mark Rosenberg, Bucks Public Relations Manager, the “dynamic entertainment live block will serve as both arena forecourt and community living room. This will be the year-round destination that draws the people of the region together for unforgettable experiences and a place people will love to gather for generations to come.”

This is quite an ambitious agenda and vision for the future, since our current arena, constructed in 1988, has lasted for barely one generation, and yet is the second-oldest facility in the NBA.

Plans are to close N. 4th St. to vehicular traffic to accommodate the plaza, which is to be located immediately east of the new arena. Running a streetcar line up N. 4th St. would allow easy access to the facility for transit users. The team also envisions the arena plan to include “entertainment, commercial, retail, residential and a practice facility” for the team, according to Brad Clark, the senior designer of Populous, a Kansas City firm that has produced over 2,000 projects over three decades, including dozens of sports facilities worldwide.

“It’s more than an arena — it’s a development — a bigger and broader vision,” Clark said. The development will “express the heritage of the community,” will “be ‘warm’ in materials,” and will have a transparent facade. “Selectively placed glass and moments of transparency throughout the building open views from within to Milwaukee’s skyline,” the team reports. We’ll be able to wave at Milwaukee County Executive Chris Abele in his new apartment high in the Moderne.

According to the team press release, “the arena design evokes Wisconsin’s natural beauty and Milwaukee’s rich heritage of industry and craftsmen, with expressive structure, transparency and fluid forms inspired by the rivers, lakes and forests of the region.”

Once constructed, the old BMO Harris Bradley Center, immediately to the south, would be razed, leading to further development of the northwest corner of downtown.

“The proposed site,” which includes the current arena location, according to the team, “primarily sits between [N.] Fourth Street and [N.] Sixth Street from [W.] State Street to [W.] McKinley Avenue.” The location will “seamlessly link with active development on all sides, including Old World Third Street, Schlitz Park, The Brewery, the Milwaukee riverfront, Water Street and the Wisconsin Center.”

The arena, and eventual development expected to occur in the area, would take over a decade to complete, with the facility itself requiring about two years of construction time. “We expect to have a shovel in the ground by early fall,” said Fascitelli. He was joined on stage by Bucks President Peter Feigin, Clark, Mark Kaminski of HNTB, and Greg Uhen of Eppstein Uhen Architects, the local design partner.

Uhen spoke “as the Milwaukee guy here,” and complimented the team’s out-of-town owners for their vision. This will be a “model” arena, he said, echoing Fascitelli’s comment that he is building for “2020 and beyond.” Uhen reminded the audience that the proposed site was for decades an elevated freeway that separated downtown from adjoining neighborhoods. “The scale of the project allows us to develop multiple blocks in a cohesive fashion,” to create a “connected neighborhood,” that would operate “24/7/365,” he noted.

It would connect “The Brewery, Bronzeville, Schlitz Park and the Beerline” districts. “It begins to fill the area with a scale that is doable,” he said.

Fascitelli added, “you need more than an arena, you need residents,” citing the new Nationwide Arena in Columbus as a successful integration of a facility and catalytic development in what was a formerly disused location. The Arena District is now said to be downtown Columbus’s most popular neighborhood.

The visual presentation consisted of three display boards showing the proposed new building and the development it hopes to spawn. The renderings were an “early, preliminary interpretation,” Clark, of Populous, said. No streetcar tracks could be seen in the rendering of the plaza, however.

Feigin said the renderings would make it easier for the Bucks to present their plans to stakeholders, including members of the legislature and other bodies. “Optics becomes reality,” he said.

“We continue to work with our local and state partners to arrive at a viable plan. The collective effort will create a ripple effect of growth, development and transformation for the entire community and region,” Feigin said in his press statement.

Photos from the Press Conference 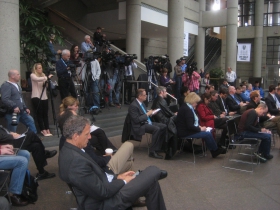 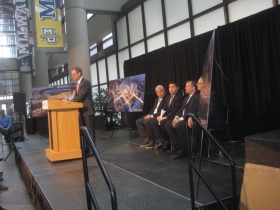 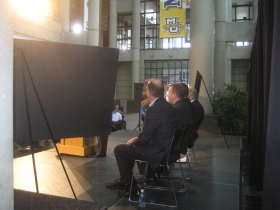 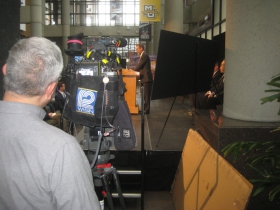 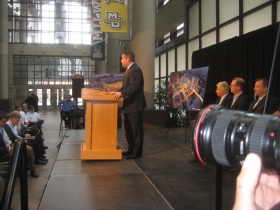 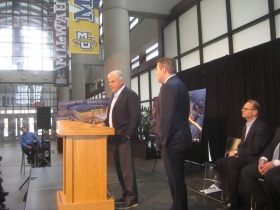