The Mayor’s Design Awards were established in 1997, during the Norquist administration, and the first winner, alphabetically speaking, was Alterra Coffee Roasters for its facility at 2211 N. Prospect Ave. The Alterra at the Lake, 1701 N. Lincoln Memorial Dr. won in 2003, as did the Alterra Headquarters project at 2999 N. Humboldt Blvd. in 2007. 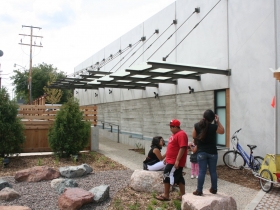 The list of the 2013 winners was released Tuesday, May 7th, and our alphabetical winner is — Alterra Cafe and Bakery, 2301 S. Kinnickinnic Ave. The judges were impressed by the “attractive curb appeal, sustainable design and ground floor transparency” of the building, constructed extensively of reclaimed materials on a busy gateway, a 5-way intersection overlain with bus, bicycle and pedestrian transit routes. Rainwater is recycled on the site. During the summer, patrons can view the precipitation as it courses from the roof through a “multi-level trough that doubles as a duck run (complete with rubber ducks).”

This cafe is the sort of neighborhood gathering place and focal point that is much treasured by urban planners since it fosters community and prompts nearby residences and businesses to fix up their own places, and maybe to get an award from the mayor as well. 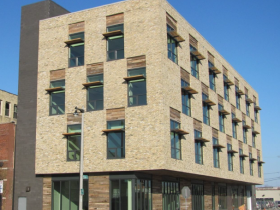 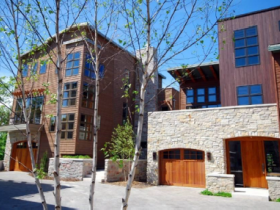 Kane Commons was of particular interest to me, since I once lived on the riverfront site of this development, in a building since demolished, and I still have a hand in the gardening there, particularly the bluff prairie restoration. So, I nominated it — for three years in a row — and was happy to see it win this year. Kane Commons was a good decade in the planning, as developer Julilly Kohler assembled the site, part of which was a vacant city-owned lot that was the original 1970’s home of the Outpost Natural Foods Co-op. There were a pair of buildings on the street proper, and a very deep lot that permitted the construction of the Commons, the most prominent feature of which is three homes perched on the bluff of the Milwaukee River, along with two in the courtyard commons. This got the attention of the judges, who cited its importance in historic preservation, design, and its semi-public spaces. Although sales languished during the recession, spring brought the project to sold-out status, with the exception of a streetfront lot that awaits a new single-family home. 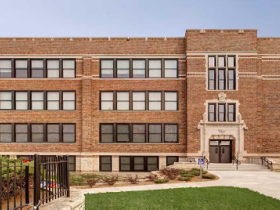 “Spaces and Places” honored such amenities as the BMO Harris Pavilion at Summerfest (no address needed), the Joy Global P&H Shovel Monument  at 635 S. 44th St., where a giant piece of earthmoving equipment has become a photo destination to rival the Bronze Fonz, and the Selig-Joseph Theater at Kadish Park, 909 E. North Ave., which will be dedicated as the new home of the Tuesday Skyline Music Series, on July 9th, 2013, and was the site of a controlled prairie garden burn by the Fire Department Tuesday, in case you smelled smoke and wondered where it was coming from. 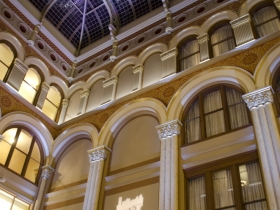 Three awards were granted in the “Test of Time” category — the Loyalty Building, 611 N. Broadway, now the home of the Hilton Garden Inn, the Stone Creek Factory Cafe and Kitchen, 422 N. 5th St. and the UW-Milwaukee Zilber School of Public Health, 1240 N. 10th St. on the site of the old Pabst Brewery. All of these projects were in the 4th District of Ald. Bob Bauman, who gets bragging rights over his colleagues, with a total of 5 honors.

The 21 design winners came from 11 aldermanic districts, but none were chosen from the 1st., 5th, 9th, and 11th districts. Anybody can nominate any building or project, so keep your eyes out for next year’s deserving nominees.

The Mayor’s Design Awards are distributed at an event at the University of Wisconsin-Milwaukee School of Architecture and Urban Planning [SARUP], with a reception following. I have been to a number of these events and find they bring a most interesting assortment of people together. In the past I have seen winners come dressed in their bowling team shirts mixing it up with the very shiniest, tanned and polished of real estate developers all in the good cause of community.

The event is traditionally emceed by Dr. Robert Greenstreet, the dean of SARUP, who brings an appropriate element of urbanity to the proceedings, along with many amusing comments and observations. The mayor, of course, is also given some podium time and a chance to hand out the awards. After the presentation in the theater, the invited guests gather in the building’s Commons for a reception. Past events have ranged from delightful catered white linen affairs with rivers of champagne to rather more modest celebrations over moist crackers, dried-out cheese and tepid decaffeinated coffee. Let’s hope the university’s slush fund has got enough in it to finance the former, rather than the latter, this year.

More about the Mayor's Design Awards