That’s the message of Democratic State Assembly candidate Dan Adams, and it’s already resonating with residents of Milwaukee’s 19th state assembly district. Just months into the campaign, Adams has received more than 150 endorsements from an impressive array of community leaders including Democrats, Republicans and Independents.

“Residents of the 19th district want a representative committed to putting their needs above partisan bickering and political antics,” Adams said. “With their support, I can bring to Madison the same diligence, reason, and respect that has made me successful in the courtroom.”

Adams, a former Milwaukee County Assistant District Attorney, lives in Milwaukee’s Murray Hill neighborhood with his wife, Gabrielle, who is also an attorney.

For more information about Dan and his campaign, please visit http://www.adamsforassembly.com.

For more information about Dan and his campaign, please visit http://www.adamsforassembly.com. 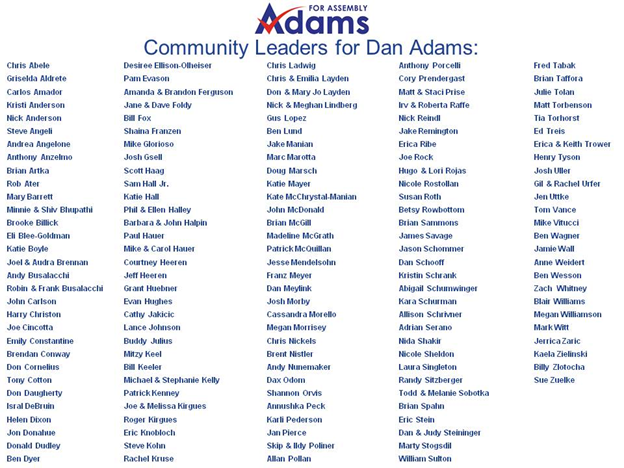 The newly appointed Milwaukee Mental Health Board met for the first time yesterday.

The Adams for Assembly campaign released a video this morning entitled “Bad Word.”

Over the past several months, Dan Adams has toured 15 schools in the City of Milwaukee.