Mayor's nomination as Ambassador to Luxembourg reviewed by Senate committee. 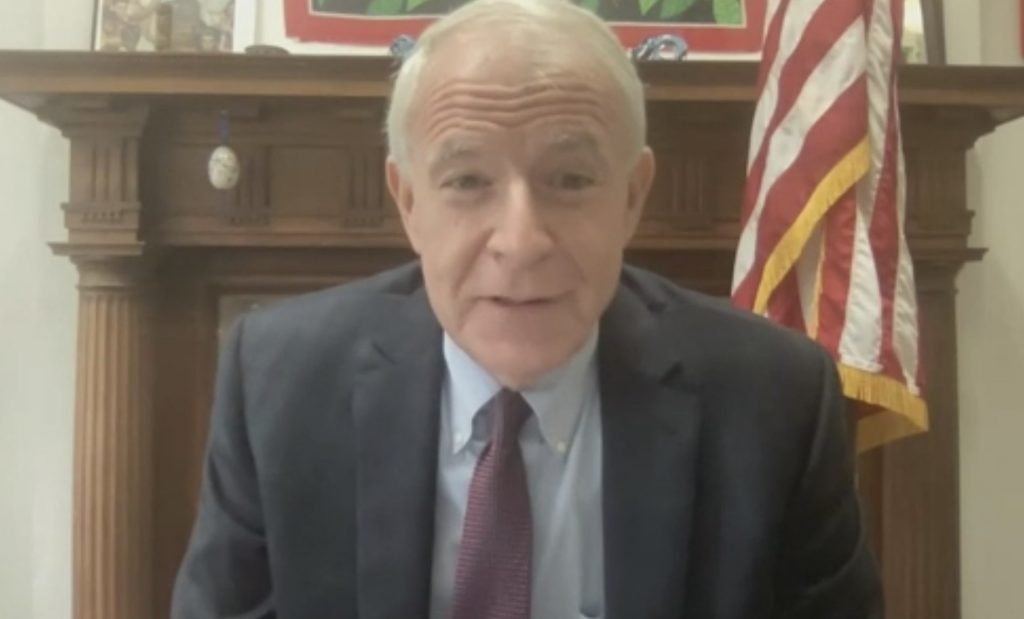 He appeared before the U.S. Senate Foreign Relations Committee on Tuesday morning and answered questions about his intentions should he be confirmed to represent the U.S.

The meeting was chaired by Tim Kaine (D-Virginia), with Senator Tammy Baldwin introducing Barrett. The mayor gave an opening statement and received four questions from senators.

“I am here today as a direct result of the love and support of my family,” said Barrett in his opening remarks. He praised his wife Kris as well as his children, parents and grandparents. He also said he was humbled by the confidence President Joe Biden had in him.

“If confirmed my number one concern will be the safety and security of U.S. citizens abroad,” said Barrett. He said there were approximately 3,100 U.S. citizens in Luxembourg.

He noted the country is a leader in green and sustainable practices, including finance.

Mitt Romney (R-Utah) was the ranking Republican at the hearing. He asked Barrett about Luxembourg’s signing on to China’s Belt and Road Initiative, a central Asia trade strategy designed to expand Chinese influence and trade.

Barrett said he was aware that Luxembourg was one of the few western European countries to sign the agreement and that the country prides itself on its strong economic relationships with others. He said he would work with the country to make sure the United States’ economic interests were represented.

Get a daily rundown of the top stories on Urban Milwaukee
“It is something that if I am confirmed I am very, very sensitive to,” said Barrett.

Barrett, like all of the other attendees, appeared virtually. His hearing was held jointly with the appointments of Scott Miller (Switzerland), Jamie Harpootlian (Slovenia) and Erik Ramanathan (Sweden).

A question from Kaine was inaudible as a result of the hiccup in the live feed. But Barrett answered that he would work to expand trade with the country. “I think that there’s a strong foundation there,” he said.

Sen. Jeanne Shaheen (D-New Hampshire) asked all of the attendees if they would attend a classified briefing on “Havana syndrome.” A collection of medical symptoms, the syndrome has afflicted (and killed) a number of U.S. diplomats while abroad since 2016. The director of CIA has labeled it an “attack” on the U.S. while the state department refers to it publicly as an “unexplained health incident.”

“Absolutely yes,” said Barrett of his attendance. The other nominees said they would as well.

“That was a good leading question, you all passed with flying colors,” Shaheen said.

“I certainly think it has made progress in the last eight years,” said Barrett. He noted that the country has also agreed to the G20 pledge to maintain a minimum tax rate.

While the hearing stream concluded, senators may still submit questions for the record by the close of business Wednesday. Barrett would need to provide responses in writing.

A committee vote and full vote of the Senate on the nominations still needs to be scheduled.

If Barrett resigns and the council calls a special election between Nov. 15 and Dec. 28, the special election would take place alongside the non-partisan spring elections. That would save the city the approximately $350,000 cost of staging a standalone election said Milwaukee Election Commission Executive Director Claire Woodall-Vogg in October.

A primary would be held Feb. 15 and a general election April 5. The position is non-partisan.

Johnson was the first to file for the race. Sheriff Earnell Lucas is also running, as is current alderwoman Marina Dimitrijevic and former alderman Robert Donovan. Other candidates that have filed include entrepreneur and Swarmm Events founder Michael Sampson, activist and former aldermanic candidate Nicholas McVey and Sheila Conley-Patterson.

The winner of the special election would not get a full four-year term, but instead would serve out the remainder of Barrett’s term, which ends in April 2024.

One thought on “Barrett Appears Before U.S. Senate”