Board rejected third and final map from its Independent Redistricting Committee. 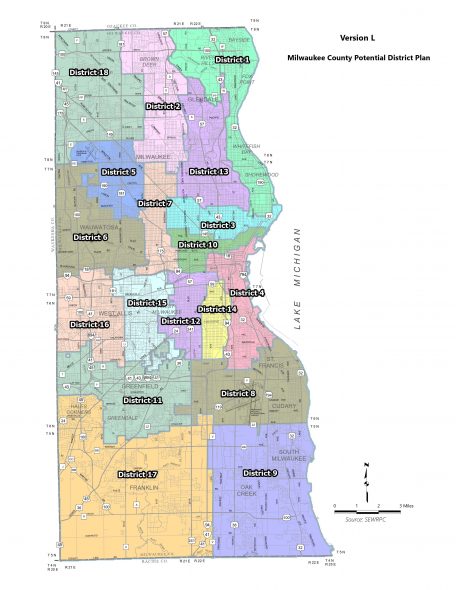 The Milwaukee County Board rejected the third and final map from its Independent Redistricting Committee (IRC) Friday.

Now the board will set about drawing the supervisory district maps themselves, with the deadline to certify maps in time for the Spring election drawing ever closer, elevating the risk that the board will face legal claims for failing to draw new maps.

Milwaukee County Corporation Counsel Margaret Daun warned the board in multiple legal opinions that failure to adopt new maps in time for the Spring 2022 elections, requiring candidates to run on current district maps, would put the county at “acute risk for litigation” under such claims as violations of the “Voting Rights Act of 1965 (VRA), denial of due process, First Amendment claims… such as a mandamus action to force the drawing of maps, or a request that a court intervene to draw the maps itself.”

The board voted 12-6 to reject the third and final map from the IRC. This vote effectively ended the independent redistricting process for the county. Though supervisors and members of the IRC have questioned the independence of the process ever since supervisors managed to get the IRC to consider their incumbency, something the IRC had previously voted unanimously against.

The IRC recommended its latest map on 4-2 vote. DiMotto and Kessler voted not to submit it to the board. DiMotto, chair of the IRC, wanted to meet one more time and try to fix some of the concerns with the map.

Now the board will take over. Next week the board’s Judiciary and General Services Committee will be the first to review new maps from SEWRPC.

Shawn Rolland and Sequanna Taylor, voted against rejecting the map because they stated that they did not believe supervisors should engage in drawing their own maps. Several supervisors also expressed concern that the board was running out of time to give the new maps to the municipalities to draw their election wards and still meet the mid-November deadline for the Spring 2022 elections.

Sup. Sylvia Ortiz-Velez wanted the board to consider an IRC map that had not been formally recommended, after the significant amount of criticism it received when it was presented to the board’s judiciary committee.

Ortiz-Velez was joined by supervisors Ryan Clancy, Felesia Martin and Jason Haas in vocalizing their reasoning for voting against the third IRC map because of concerns of white voter dilution of the Black vote in a few districts intended to be majority Black districts.

Specifically, the supervisors were concerned about Black majority districts that also included majority white sections of the East Side, where voters turn out in high numbers. And while these supervisors had concerns with the map favored by Ortiz-Velez, they all said it appeared a more equitable map than the one recommended by the IRC.

Sup. Sheldon Wasserman also said equity and the Voting Rights Act of 1965 should be the main priority of redistricting. He said the splitting up of the East Side in Black majority districts, “looks like Republican party politics going on in Madison.”

Wasserman, a supporter of considering incumbency, said the board’s redistricting never should have been independent, because supervisors are non-partisan offices.

“Independent panels in a non-partisan office is really not the way we should have gone,” he said. “It was a flaw that was done four or five or six years ago.”

Get a daily rundown of the top stories on Urban Milwaukee
Meanwhile, Supervisors Steven Shea, Tony Staskunas and John Weishan, Jr., all of whom also advocated for the IRC to consider incumbency, pushed for the third map from the IRC to be adopted. They expressed concern that letting the board take over redistricting could damage the integrity of the process.

“It’s not a perfect map, we’ll never get to a perfect map if that’s what some members are holding out for,” Staskunas said.

“The goal is not for perfection in a map, the goal is for equity,” said Martin. She has been among the supervisors repeatedly expressing concern about the Black majority districts throughout the process, and standing against incumbency considerations. Martin, who is Black, said she could have confidently run under any map reviewed by the IRC.

Rolland said to his colleagues that while there may not be a legal risk to taking over redistricting, other than the precarious timeline, there was risk of another nature.

One thought on “MKE County: Board Takes Over Redistricting, Rejects Independent Effort”