Milwaukee Starts Over On Redistricting, Only To Adopt Same Map Again 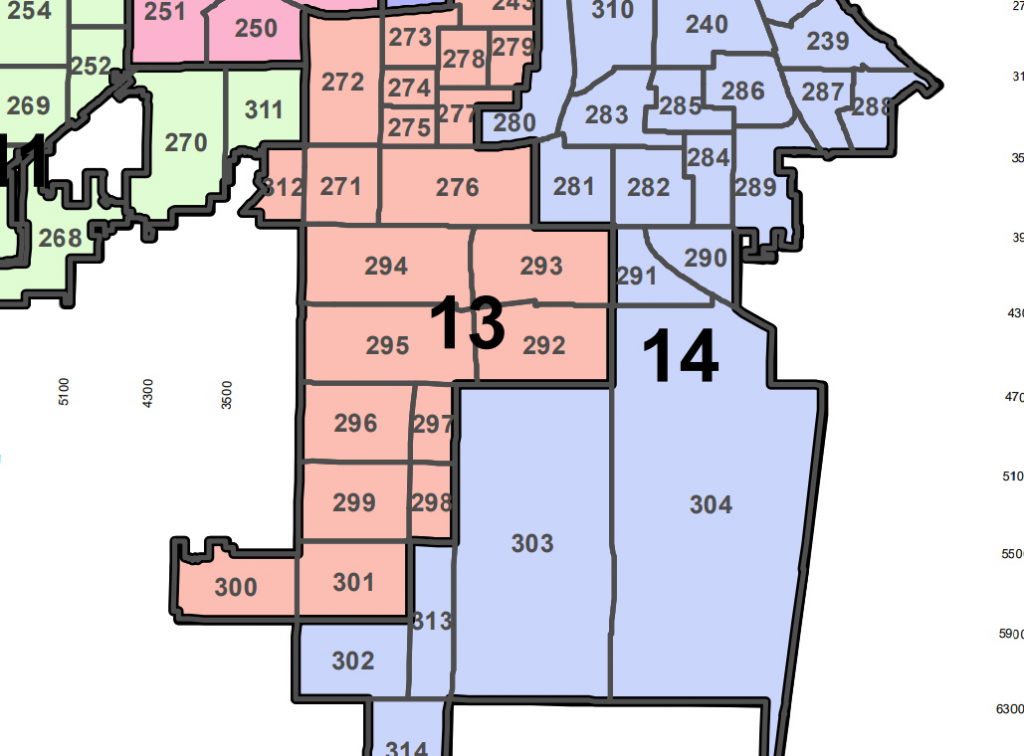 In November the Common Council thought it had concluded its decennial redistricting process. Making relative minor adjustments to accommodate areas of the city where the population grew or shrank, it adopted a new map that maintained the balance of six Black majority districts, two Hispanic districts and five white districts. Two of the white districts were defined as Hispanic “influence” districts with a Hispanic voting-age population of at least 25%. The remaining two districts had no racial or ethnic majority.

But after heavy lobbying by Voces de la Frontera and other Latino stakeholders that a third Hispanic majority district was needed, then-Mayor Tom Barrett vetoed the map and the council ended up sustaining the veto. The council was headed back to the drawing board, or so it thought.

“We have received some advice that was surprising to some members,” said Alderman Robert Bauman after the committee emerged from a three-hour, closed-session discussion with the City Attorney’s Office.

At its simplest level, the City Attorney’s Office doesn’t believe any of the council’s revised maps would survive an equal protection challenge in court. The council and community members’ explicit rationale for considering changes was race and, under the legal standard of strict scrutiny, the council could only consider race if it was correcting a federal Voting Rights Act violation. The City Attorney’s Office believes no such violation exists with the earlier map, but did previously provide Barrett advice on the legality of vetoing it and extending the process.

The committee unanimously endorsed reapproving the original map. The full council will meet to consider it on Jan. 18.

Get a daily rundown of the top stories on Urban Milwaukee
“And with that marathon of a meeting, we have accomplished nothing today,” said committee chair Ald. Ashanti Hamilton. He apologized for the amount of time spent by many stakeholders. “It feels like the Twilight Zone.”

After the meeting, Voces executive director Christine Neumann-Ortiz called the committee’s actions a “disgrace” and “disappointing.” She said her organization is looking for its own legal opinion and considering further actions.

“We think there is a possibility that there is a voting rights violation,” said Voces redistriction commission member and attorney Richard Saks. “That’s something we’re going to explore.”

“Tonight the City of Milwaukee failed all of its immigrant and refugee communities as they were left with less tonight than when the day began,” said Alderwoman JoCasta Zamarripa in a press release after the committee voted. “The largest city in the state has failed its people because of poor advice from the Office of the City Attorney. Members of the Judiciary and Legislation Committee, elected representatives of Milwaukee’s Latino community, and community advocates were hoodwinked.”

And despite the fact that the council appears poised to end up where it started, many new maps were floated, and a lot of conflicting opinions about them were offered. Maps were submitted by Voces, Forward Latino, Milwaukee Muslim’s community, District 13 Alderman Scott Spiker and District 14 Alderwoman Marina Dimitrijevic.

Six different maps were discussed, each of which is centered on moving the dividing line between the two proposed Hispanic influence districts: District 13 (the far south side Garden District) and District 14 (Bay View and a handful of surrounding neighborhoods). By trading previously-approved wards back and forth, the four maps fully evaluated by city staff would have pushed the Hispanic voting-age population as high as 41.4% in District 13 and as low as 14.1% in District 14. The previously approved map had them at 25.6% and 28.1% respectively.

“If Latinos are 20% of the population that means they should be entitled to three aldermanic representatives,” said Neumann-Ortiz. She said Spiker, who has touted the diversity of his district, was attempting to maintain a district controlled by white conservatives. Spiker has previously said he thought his district could become majority Hispanic in the next decade without changing its boundaries.

“We created the compromise map, which is now known as B,” said Forward Latino head Darryl Morin during the meeting. It increased the Hispanic population in the 13th at the expense of the 14th.

But Map B, and every other map offered, exposed another potential issue: another racial minority that would be impacted.

Centered around the Islamic Society of Milwaukee, 4704 S. 13th St., a growing Muslim community fills District 13. “The Muslim community very much lives in a circle around that,” said Palestinian immigrant and real estate developer Nabil Salous.

Though it was referred to by many speakers as a Muslim community, it isn’t eligible for protection under the Voting Rights Act because of its religious status, but instead its racial makeup. The population is made up of a number of minority groups, best summarized as MENA (Middle East and North Africa). It also includes a growing Indian subcontinent population. The census, originally proposed by the Obama administration to include a MENA identity option, ultimately was conducted without the option under the Trump administration. The result is that there is no clear data on exactly how many area residents are part of the minority population base, but looking at area business names leaves an unmistakable impression that it’s a sizable population.

Salous supports Map C, one he submitted with support from other Muslim community leaders. It swaps two wards further north, in a heavier Hispanic area, and yields a 28.1% Hispanic District 13 and a 25.6% District 14. That proposal wasn’t backed by any of the Latino leaders.

Spiker, who had noted the challenge in the first go-round, highlighted the competing interests again on Monday. “This is the sorest point for me,” said Spiker of trying to not split up the emerging Muslim community. But he was also critical of the potential for disruption from other configurations as well, either from voter turnout disparities or substantially reconfiguring the area around the airport. “It’s not a pretty spot to be in, but it’s the spot we’re in.”

Ald. Michael Murphy, after more than a dozen community members spoke, asked Assistant City Attorney Kathryn Block if she was comfortable that the only reason discussed for making a change was race.

“I knew nothing about this,” said Zamarripa, before the committee went into closed session. “I’m offended by this last-ditch effort by the alderman of the 13th that just doesn’t want to look at any amount of change.”

An eight-page opinion, signed by City Attorney Tearman Spencer, addressed to Spiker and dated Jan. 9, is attached to the council file and warns of potential challenges.

“This was not of my creation, this was out of a conversation with the Muslim community,” said Spiker. “The worst thing that could happen is that we pass something that is illegal. We don’t want to do that.” He brought up scenarios where adopting either map would result in a lawsuit from one of the affected groups.

The new map would first be used for the 2024 council election.

One thought on “City Hall: Milwaukee Starts Over On Redistricting, Only To Adopt Same Map Again”