So Much For An Independent Redistricting Process 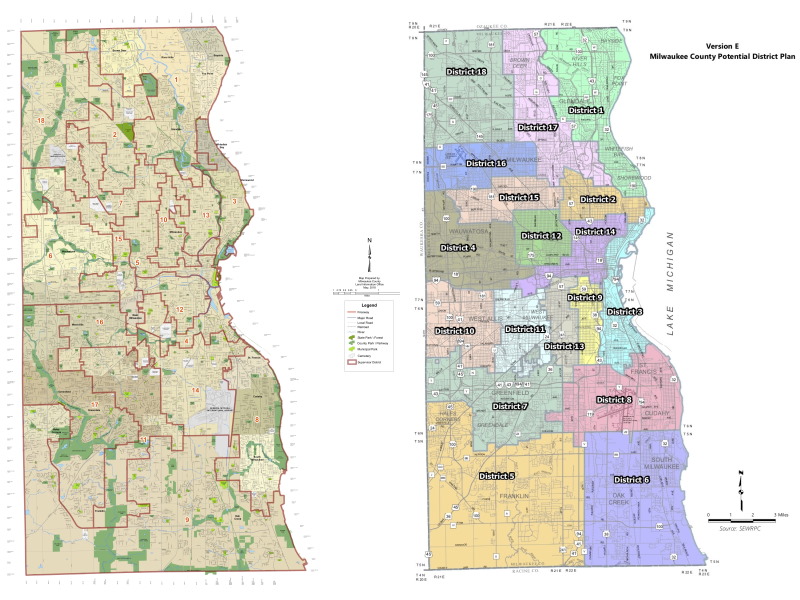 Current county board districts and the proposed districts.

The Milwaukee County Board’s Judiciary, Safety and General Services Committee is not happy with a new district map created by the Independent Redistricting Committee (IRC) the board itself created. The map would substantially redraw the 18 supervisory districts, including placing three incumbent supervisors in the same district.

The committee met Wednesday to review the proposal. The supervisors that attended the meeting, including a number of non-committee members resoundingly voiced displeasure in the map. Several made no attempt to hide that they were miffed by the IRC’s decision not to protect their incumbency. Others took a more indirect approach, attempting to poke holes in the IRC process.

The meeting began with retired Judge Jean DiMotto, chair of the IRC, explaining that the committee drew the maps based upon four principles, chief among them honoring the 1965 Voting Rights Act.

The committee voted unanimously to reject the map, sending it back to the IRC, which will attempt to square the supervisor’s suggestions with the maps they spent more than a month creating.

This move by the supervisors could set the redistricting process back weeks. And the county is already half a month behind schedule, and municipalities are waiting for it to finish so they may draw their own districts and voting wards.

In a formal legal opinion provided to supervisors Thursday, Milwaukee County Corporation Counsel Margaret Daun said that failure to meet state statutory deadlines for adopting maps would create an “acute risk of litigation.” She explained, “Claims could include violation of the Voting Rights Act, denial of due process, First Amendment claims, among others.”

The IRC was created by the board in 2016 to eliminate the politicized process of the past whereby supervisors drew their own legislative districts. The ordinance makes no mention of protecting incumbency.

Nevertheless, the first supervisor to speak Wednesday was Steven Shea, and immediately he began questioning DiMotto, and the other IRC members present for the committee meeting — former judges Mary Kuhnmuench, James A. Gramling, Jr., Fred Kessler — why they didn’t consider incumbency in the process.

Get a daily rundown of the top stories on Urban Milwaukee
“Redistricting is not for the benefit of the elected officials. Its intent is strictly for the people in that district who vote, it is all citizens in our county, no matter which corner of the county they live in,” said Kuehnmuench. “The Voting Rights Act of 1965 is very clear, as I said, in the preamble it clearly says that the purpose of all redistricting or all elections is that we want to ensure, in every aspect of elections, that it’s one person one vote.”

Shea paid no mind to the judge’s defense of drawing districts for voters instead of existing politicians, and doubled down saying, “It’s not fair, to the members of this body, to commit political hari-kari by signing their own political death warrant, by asking them to vote themselves out of office.”

Shea said he was not speaking out of self interest, given that the IRC map favors him, and was instead saying this in the interest of the body. A point made clear by several other supervisors who also said they would have liked to see the IRC protect incumbency.

Sup. John Weishan, Jr. intimated that the IRC was treating supervisors poorly with their maps. “We are not the enemy, I have had tens of thousands of people go to the polls and vote for me. Now should we get special priority, of course not, but it is something that should be taken into consideration like any other community advocate. And we definitely should not be targeted,” he said.

Sup. Sheldon Wasserman, who would be placed into the same district as another supervisor, said the committee should consider maps that were independently drawn by Judge Kessler. His maps take into account incumbency, and naturally, as Wasserman said, “Some of the stuff he creates really makes a lot of sense to other legislators.”

The IRC voted in the beginning of its process not to consider Kessler’s maps, because they were not created by the committee, as the county’s ordinance directs. Kessler’s defense on incumbency before the judiciary committee relied on a line from a redistricting handbook created by the National Conference of State Legislators, which is a lobbying organization that represents elected politicians, and for which Wisconsin State Assembly Speaker Robin Vos (R-Rochester) serves as the head.

Sachin Chheda, a partner at Nation Consulting, director of the Fair Elections Project and chair of the Wisconsin Fair Maps Coalition, told Urban Milwaukee, in regards to incumbency: “I have a lot of friends on the county board who are good, honest, progressive public servants. But the reality is that no elected official is indispensable.”

“When the redistricting process accounts for incumbency, it is inevitably considering the personal interest of a politician in continuing to serve, not the voters of the community,” Chheda said. “If it turns out that two incumbents are both in an independently well-drawn district, then in my view, them’s the shakes.”

Sup. Tony Staskunas, chair of the judiciary committee and who would end up in a district with another supervisor, asked Daun about the board’s ability to amend the maps at committee. “Somebody should be thinking about how this board is going to get amendments drafted,” he said.

Some supervisors raised specific concerns about the boundaries of majority Black districts, wondering whether some would create violations of the Voting Rights Act. Sup. Sylvia Ortiz-Velez raised concerns about District 2 on the IRC Map, which draws a wealthy and white portion of the upper east side of Milwaukee into a district that is predominantly Black. Ortiz-Velez and some of her colleagues expressed concern that this district could represent a case of white vote dilution of a majority-minority district. She and others encouraged the IRC to consider historic voting behavior when drawing districts.

These concerns were shared by State Sen. Lena Taylor, who also spoke at the committee, and well as Sup. Priscilla E. Coggs-Jones.

Sup. Felesia Martin also raised a specific concern about the proposed District 15 on the IRC Map. She said she was concerned about the portion of Wauwatosa included in the Black majority district.

As we detailed Thursday in our coverage of potential, new Hispanic-majority districts, current county districts have been impacted by a handful of majority-white wards outvoting a number of minority-majority wards.

Independence of the IRC

Sup. Shawn Rolland agreed with his colleagues that there appeared to be some tweaks the IRC could make to the maps, but also defended the IRC’s disregard for incumbency saying.

“I think their work aligns to the words of the [independent redistricting] ordinance,” said Rolland. “Do we agree with the words of the ordinance or do we believe that there should be additions, subtractions, revisions, and I think that’s worthwhile to discuss.”

Rolland reminded his colleagues that the ordinance guiding the IRC does not “talk about incumbency as a key item.”

Sup. Ryan Clancy, who would end up in a district with two supervisors, said he was concerned about supervisors providing comments directly to the IRC, specifically about his own district. “The word independent, in the independent redistricting committee, is literally independence from us,” he said. “I will withhold comments on specific borders as I think we should.”

Shea, who made the opening salvo attacking the maps for not protecting incumbency, and who claimed to speak in the interest of the body, and not himself, reiterated a point at the full board meeting that he made a few days prior. He said, “We respect the Voting Rights Act of 1965… At the same time, [the proposed map] as was presented, was asking this body, much of this body, to commit political hari-kari and vote themselves out of office.”

The board respects the voting rights of their constituents, though perhaps not at the expense of their own power.

A high-resolution map of the proposed districts is available on Urban Milwaukee.

Update: This story was updated to reflect that on Aug. 27 Judge Kessler said he used data from the 2020 Census to draft his maps.

2 thoughts on “MKE County: So Much For An Independent Redistricting Process”