Hispanic Districts Key to Board Redistricting 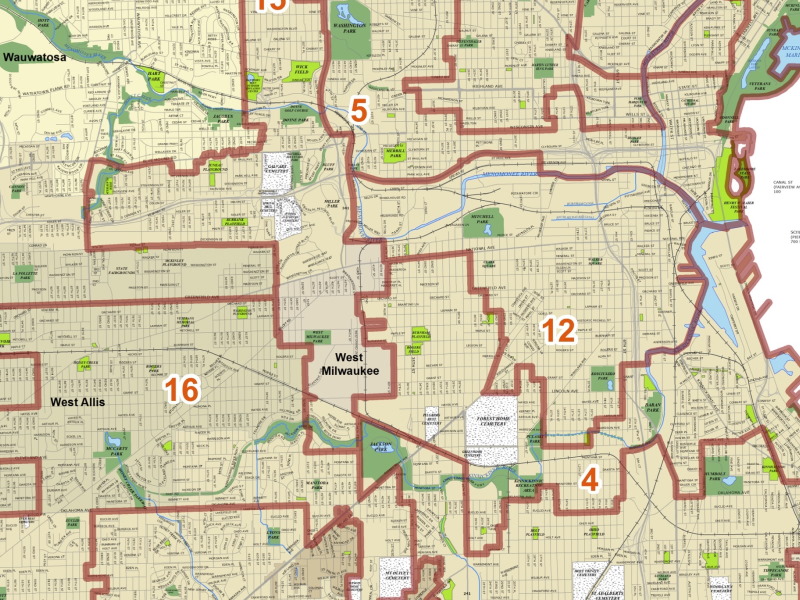 Portion of the current district map.

The next district map for the Milwaukee County Board of Supervisors could, for the first time, include two districts on the South Side that have solid Hispanic majorities. And the change could substantially alter the board’s power dynamics.

Typically, it is the legislative bodies that redraw their own districts every 10 years using census data. But, for the first time, the Milwaukee County supervisory districts are being drawn by an independent committee appointed by the board.

That committee, the Independent Redistricting Committee (IRC), is comprised of six retired judges: Charles Clevert, Jean DiMotto, James A. Gramling, Jr., Chuck Kahn, Fred Kessler and Mary Kuhnmuench. After substantial deliberation, it approved a new map on Sept. 23, but the county board must now adopt it.

The IRC put a priority on honoring the intent of the 1965 Voting Rights Act, and recognition of racial and ethnic communities of interest. The Hispanic population in Milwaukee County increased by 21% during the past decade to 16.3% of all residents. Meanwhile, white residents, who currently have 10 supervisors on the 18 member board, lost population over the last decade. With that in mind, the committee sought to draw two districts where Hispanic residents were the majority.

But one of them, District 4, had a Hispanic majority of only 56%. The case law regarding racial and ethnic majority districts would call this an “influence district” not a majority-minority district. It includes a significant chunk of the Hispanic-dominated Near South Side as well as the northern piece of the majority-white neighborhood of Bay View. Over the past decade, the Hispanic population in this district grew to more than 60%, according to data from the 2020 Census.

Get a daily rundown of the top stories on Urban Milwaukee
Clancy won the Bay View wards, and they had such a high turnout that they tipped the election in his favor by 48 votes. These seven majority-white wards alone accounted for more than 3,100 votes, or approximately 57% of the total vote.

Ortiz-Velez, who represents District 12 on the county board – the only district that meets the legal definition of a Hispanic majority district – provided public comments to the IRC saying that both District 4, and her own, are examples of white vote dilution of a minority vote and “a serious violation of the Voting Rights Act.”

In public comment to the IRC, Ortiz-Velez said that a single majority-white ward in her district represents 24% of the turnout. She noted that this ward is east of Interstate 94 and represents a distinct community that is whiter and wealthier than the majority of her district, but has a “disproportionate electoral impact that dilutes the voting power and political voice of Milwaukee’s Latino community.”

She wants two true majority-Hispanic districts, even if she won’t represent either of them. Ortiz-Velez, as of January, is a representative in the Wisconsin State Assembly, and has said she will not seek re-election to the county board in 2022. 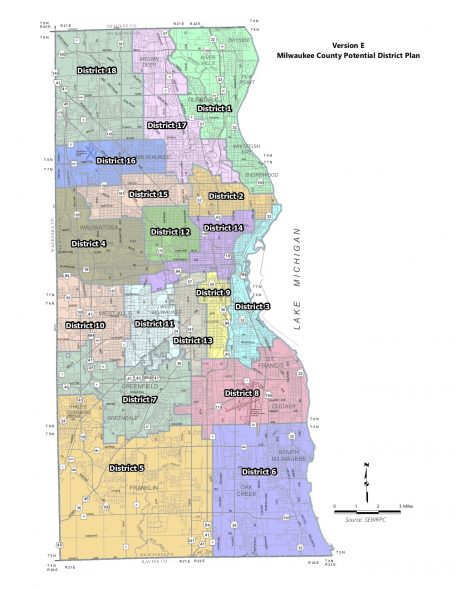 Kevin Muhs, executive director of the Southeast Wisconsin Regional Planning Commission, explained at an IRC meeting on Sept. 15, that three districts could be drawn Hispanic majority of just over 50%. “But then we run into the issue that then none of them are actually, really empowering Hispanic populations,” he said. SEWRPC is providing technical assistance to the IRC’s redistricting process.

The empowerment issue comes from a court decision on the case Baldus v. Members of the Wis. Government Accountability Board. The resulting case law establishes that districts with a majority “hovering around 50%,” as DiMotto, chair of the IRC put it, do not legally constitute a majority-minority district.

But with the creation of the two new strong-majority Hispanic districts, and adherence to other common redistricting principles, the IRC has created a new map that would reshape the 18-member board. One of the new districts it has created, running along Milwaukee’s lakefront, has three sitting supervisors living in it.

The board now faces a tight timeline to review and modify the proposed districts. It is already a half month behind schedule, putting the municipalities — which must wait for the county map — even further behind schedule.

The board will next meet on Oct. 1. And when it does it must reckon with the fact that is behind schedule on adopting a new map, that the current map is potentially illegal under the Voting Rights Act and that the recommended new map will result in some supervisors either having to move or compete to stay in office.

The full process, including the underlying municipal maps, needs to be completed by Nov. 23.

If the board doesn’t act and a court challenge comes, a judge could step in to draw the new map.

For more on the process, see our coverage from Wednesday.