Suit is filed by the survivor of Rittenhouse shooting.

By Corri Hess, Wisconsin Public Radio - Oct 15th, 2021 03:31 pm
Get a daily rundown of the top stories on Urban Milwaukee 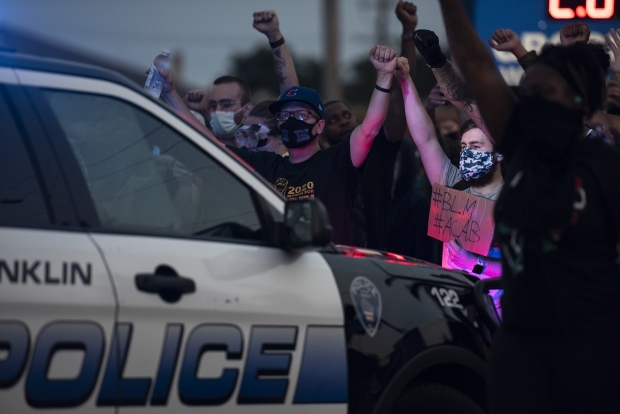 A federal civil rights lawsuit filed by the survivor of a deadly shooting during a protest against police brutality in Kenosha accuses law enforcement officials of conspiring with armed militias.

Gaige Grosskreutz’s lawsuit alleges Kenosha police and sheriff’s deputies “discussed and coordinated strategy” with a “band of white nationalist vigilantes,” on the night of Aug. 25, 2020, to protect property and maintain order on the third night of protest following the police shooting of Jacob Blake.

The lawsuit alleges law enforcement knew there would be 3,000 people in Kenosha that night by monitoring Facebook but did nothing to stop it.

Grosskreutz was seriously wounded when he was shot by Kyle Rittenhouse.

Rittenhouse’s attorneys maintain he was acting in self-defense when he shot Grosskreutz and killed Joseph Rosenbaum and Anthony Huber.

According to the lawsuit, at approximately 11:30 p.m. — about 15 minutes before Rittenhouse shot Rosenbaum, Huber and Grosskreutz — law enforcement officers were talking to Rittenhouse and other armed individuals in the parking lot of a private business.

“Despite the fact that the armed individuals were in violation of the curfew order, the officers and deputies communicated their full support and appreciation for Rittenhouse and others,” the lawsuit says. “In video footage taken at the scene, officers can even be heard asking armed individuals if they needed water and other supplies. Rittenhouse can be seen telling the officers that they did need water, which officers gave them.”

According to the lawsuit, Grosskreutz approached Rittenhouse with his hands raised after seeing him shoot Huber.

Rittenhouse was on the ground, but shot Grosskreutz, destroying about 90 percent of Grosskreutz’s right bicep.

Grosskreutz, who is a paramedic, had his own tourniquet and used it. If he had not, he might have died, the lawsuit says.

Sam Hall, the attorney who is representing Kenosha County and Kenosha Sheriff David Beth, said Friday the allegations are false.

“The lawsuit also fails to acknowledge that Mr. Grosskreutz was himself armed with a firearm when he was shot and Mr. Grosskreutz failed to file this lawsuit against the person who actually shot him,” the statement says. “Sheriff Beth and Kenosha County plan to promptly file a motion to dismiss this case.”

The lawsuit seeks unspecified compensatory and punitive damages, along with “injunctive relief to prevent future violations of the law.”