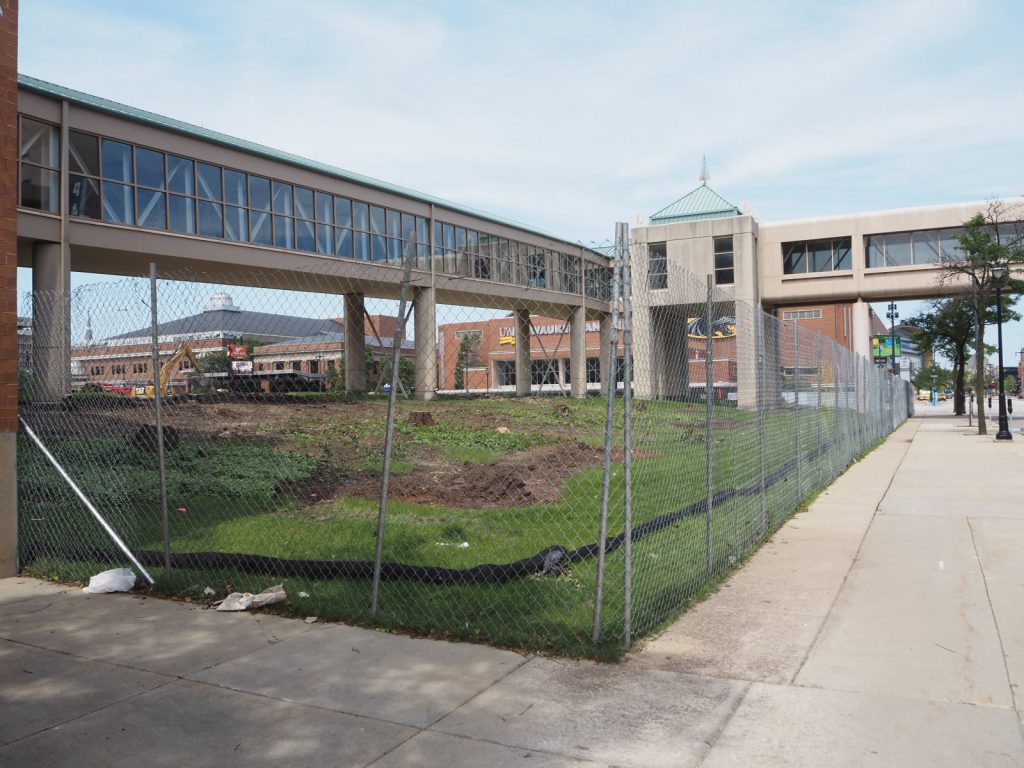 The fence is up.

It’s the first physical step towards the construction of the Wisconsin Center‘s $420 million expansion.

The project will add 112,000 square feet of exhibition space to the convention center, creating a 300,000-square-foot hall. A new 2,000-person ballroom and 24 meeting rooms will also be added, creating the capability to host two major conventions simultaneously.

It includes the creation of 400 indoor parking spaces.

The project is being funded by district revenue, which includes a series of taxes in addition to rental fees. The district debt is backed by a 3% county-wide hotel room tax, 0.5% food and beverage sales tax and 3% rental car tax.

Get a daily rundown of the top stories on Urban Milwaukee
The Wisconsin Center District expects to open the new facility in the first quarter of 2024.

As part of the project, WCD committed to a contracting and hiring program similar to one imposed by the City of Milwaukee on projects receiving city financial assistance. At least 25% of the work is to be committed to minority-owned businesses, 5% to woman-owned businesses and 1% to veteran-owned businesses. At least 40% of project work hours will be performed by city residents or certified through the city’s Residents Preference Program for unemployed or underemployed city works. The work hours goal is a looser definition than the city’s 40% RPP requirement, which was required of Fiserv Forum‘s construction.

The original convention center, known then as the Midwest Express Center, was completed in 1998. 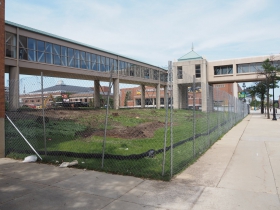 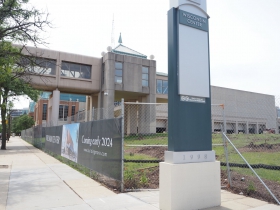 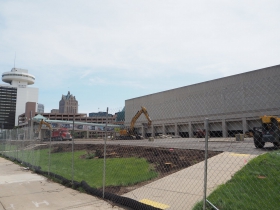 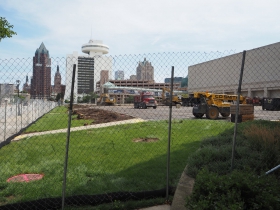 What is planned to be the world’s tallest mass timber building is beginning to look the part.

The 25-story apartment tower called Ascent, is being developed by New Land Enterprises, and it reached approximately 50% of its final height this week.

When finished, the 259-unit building will rise 283 feet, eclipsing the current world leader, the Mjos Tower in Norway, by three feet.

Two East Side homes will stand for at least a little longer.

Developer Brian Wagner of TamaRock Ventures, who is seeking to develop a seven-story, 90-unit apartment building on the corner, applied to demolish the houses as well as two four-unit structures along E. North Ave. But that proposal, which would also require a zoning change, is at least for now on hold.

Hines Acquisitions continues to pursue the development of a 32-story apartment tower at the northwest corner of the Historic Third Ward.

The $140 million tower would be developed on the site of a 0.79-acre, riverfront surface parking lot at 333 N. Water St.

The proposal calls for a 365-foot, 300-unit apartment tower with an attached eight-level, 405-stall parking structure. The apartments, owing to the location, finishes and amenities, are intended to command a premium price.

The developer behind a proposed 15-story mass timber apartment tower is moving forward with securing design approval for the project.

The Druml Company is working to secure new tenants for a two-story building it owns just north of Fiserv Forum.

The real estate company owns a 67,500-square-foot building that runs from N. 6th St. to N. 7th St. just north of W. McKinley Ave. Built into the side of a hill, a one-story portion at 1311 N. 6th St. is currently occupied by Milwaukee Area Technical College. The portion of the building that faces N. 7th St. appears as a one-story building but includes a lower level connected with the MATC space.

The company secured a zoning change from the Common Council in July to change the property’s classification from “Industrial Light” to “Downtown – Mixed Activity.”

A new owner is refreshing a downtown office building.

The Druml Company is launching a renovation of the five-story building at 789 N. Water St. The company acquired the 73,250-square-foot building in September 2020 for $6.25 million.

Built in 1999, the building lost its top-floor tenant, Heartland Advisors, in 2019. The company signed a lease for space in BMO Tower, located across the street, and moved when the tower was completed in 2020.

2 thoughts on “Plats and Parcels: Construction Ramping Up on Wisconsin Center Expansion”