Project being paid for with funds generated by Michels development. 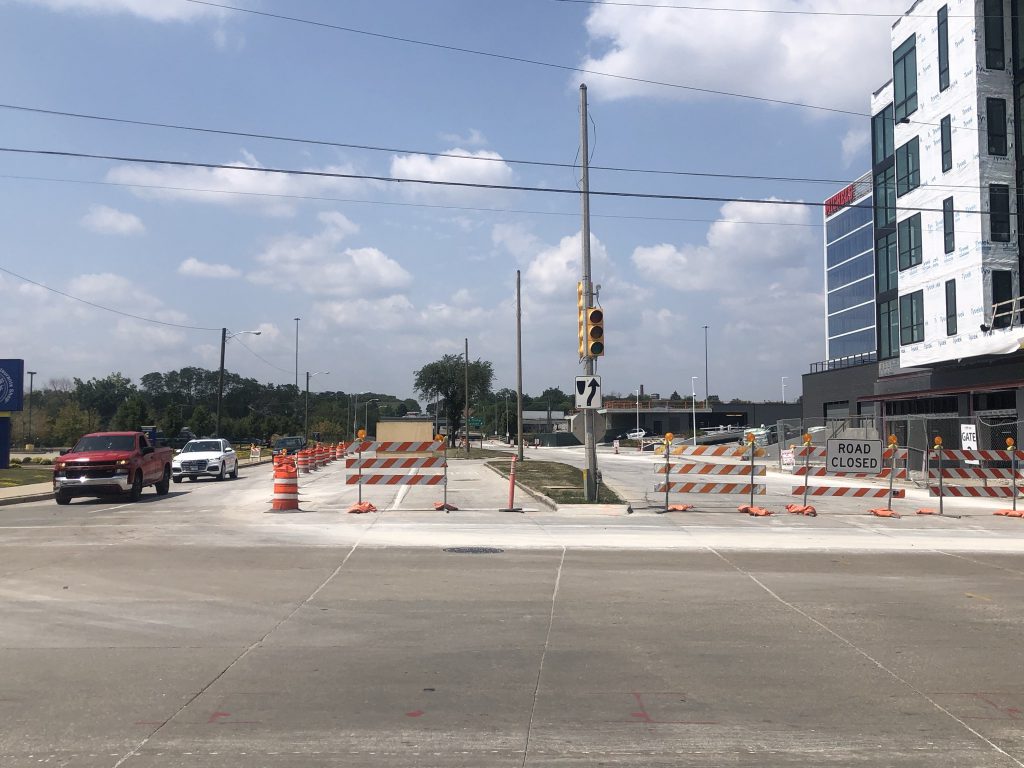 A street paving project at the northwest corner of Bay View is intended to make a key corridor safer for motorists, pedestrians and cyclists alike.

Becher Street is being rebuilt from S. 4th St. (Interstate 94) to S. Kinnickinnic Ave. Besides a smoother roadway, the biggest change will be narrowing the street from two lanes in each direction to one.

“This local project highlights City’s Complete Streets policy to make our streets safer for all users and modes of transportation,” said the Department of Public Works in a press release.

Raised bike lanes separated from both the travel lanes and sidewalks will be installed between S. 4th St. and S. 1st St. The Department of Public Works says the bicycle infrastructure is the first of its kind being installed in the city.

A raised bike lane that is connected to the travel lane was installed on S. Bay St. in 2011. And given that E. Becher St. becomes Bay Street east of S. Kinnickinnic Ave., you will be able to ride both lane types on the same trip. But a gap that is at least a half-mile long will separate the two, forcing riders back into painted lanes in between. Separately, the city is pursuing an enhanced bike lane that will run along S. 1st St. to connect the two north-south Kinnickinnic River Trail segments. That lane will intersect with the new Becher Street lane.

Work started this week on the Becher Street project and is expected to be completed in November. Eastbound traffic will be allowed throughout the duration of construction while westbound traffic is expected to be closed until the project is completed. With traffic being detoured, the truck-damaging KK Can Opener, a series of bridges near the east end of Becher St. along Kinnickinnic Avenue, might get a chance to rip open a few more semi-trailers. “Trucks should follow posted detour signs and be aware of bridge height restrictions in the area,” said the DPW release.

Driveway approaches, sidewalks, curbs, gutters and curb ramps will also be replaced as part of the project. The portion east of S. 1st St. will be rebuilt with concrete. The roadway to the east will be paved with asphalt. Landscaping enhancements will also be made.

Get a daily rundown of the top stories on Urban Milwaukee
The project is being paid for using funds from the tax incremental financing (TIF) district created for Michels Corp’s $100 million River One complex. The mixed-use development, being built at the northwest corner of S. 1st St. and W. Becher St., includes an eight-story office building and 95-unit apartment building. Additional buildings are planned, including a hotel.

When the project was proposed in 2018, the city approved a Department of City Development plan to set aside $2.5 million for Becher Street’s reconstruction as part of a larger TIF plan. Other funds are being used to partially cover the costs of building the riverwalk that wraps the site. State TIF law allows districts to be used to pay for public infrastructure projects within a half-mile of their boundaries. The funds will be repaid through incremental property tax revenue generated by the development.

The corridor, part of the Harbor District, is seeing development beyond Michels’ campus. Bear Development is pursuing redevelopment of the former Filer & Stowell complex at 147 E. Becher St. Wheel & Sprocket also redeveloped the building at 187 E. Becher St. into its headquarters, its first City of Milwaukee bike shop and office space for other bike-focused organizations, including the Wisconsin Bike Fed‘s Milwaukee office. The Druml Company is also improving its properties at the west end of the corridor. 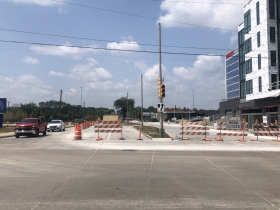 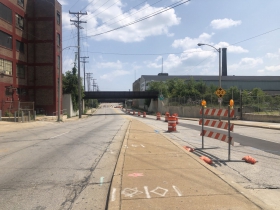 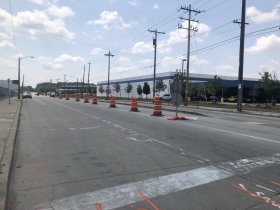